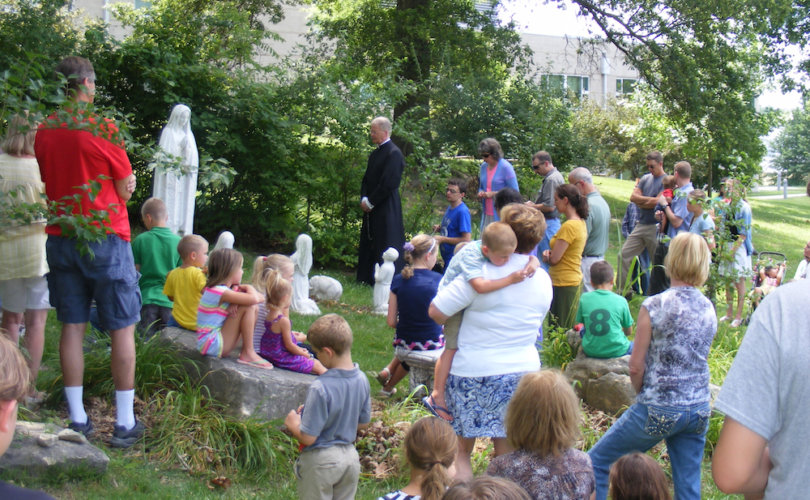 JEFFERSON CITY, Missouri, June 17, 2017 (LifeSiteNews) – Catholics came from across the state Tuesday to pray for restoration of Catholic principles in the controversy caused by a Diocese of Jefferson City initiative pushing acceptance of gender ideology in its schools.

Roughly 120 Catholics traveled to be part of a pilgrimage conducted at the Shrine of Our Lady of Fatima adjacent to the diocesan chancery in the middle of a workday, praying the rosary together with two diocesan priests in the 93-degree heat.

Jefferson City Bishop John Bishop Gaydos has defended the new policy, insisting to priests in an internal memo that it promotes Catholic moral teaching. He dismissed opposition and subsequent media reporting as “public furor” coming from “outside our diocese.” He also called the pushback “falsehoods” and a “misinformation campaign.”

The policy makes the diocese a forerunner in the U.S., according Superintendent of Schools Sister Elizabeth Youngs, who had told the Jefferson City News Tribune for a June 4 report, “We probably are in the lead.”

Many families have cried foul over both the policy and its handling by the diocese.

“Thank you for having the great courage to be here today,” Fr. William Korte told those who came to pray. “It is God’s honor that we are praying to restore our diocese.” Fr. Korte and Fr. Richard Frank prayed at the pilgrimage with the faithful.

The pilgrimage was organized by diocesan families who say Bishop Gaydos and his staff covertly instituted a policy that is not consistent with Catholic teaching, doing so without involving parents or pastors of parish schools, and timing it such that any opposition would occur over the summer and subside before the next school year.

The policy — referenced by the diocese as a “pastoral process of accompaniment and dialogue” — allows pastors to admit transgender students to diocesan schools and also encompasses anyone from a “non-traditional” family such as children in household led by same-sex couples or living with cohabiting parents.

Critics say the diocese has avoided authentically addressing concerns over the policy, and that any response has consisted of simply citing the policy document.

“There is no dialogue despite what they imply,” the 30 Pieces of Silver blog states. The blog organized by diocesan parents has been documenting the controversy.

They say as well that despite the diocese’s contention the policy does not mandate acceptance of transgender students, allowing priests to do so will have the same effect. Further, they say, those priests who do not accept transgender students will risk retribution.

To justify the policy, the diocese cites #250 of Pope Francis’ Amoris Laetitia, which says families with members experiencing same-sex attraction should be given respectful pastoral guidance and assistance in understanding and carrying out God’s will in the their lives. Its critics have said that this takes the pope way out of context.

One of two meetings held last month to roll out the policy to priests and educators was audio recorded and had a diocesan priest pointing this out to leaders — a message the recording indicates was not well received by those leaders. The recording of the meeting also had a role-play overseen by diocesan nuns containing a positive portrayal of a same-sex couple bringing their child to be enrolled in diocesan school.

Among the things chronicled by the 30 Pieces of Silver blog is a listing of some of the resources included in the diocesan policy that flagrantly embrace or promote homosexuality or are otherwise in direct opposition to Church teaching on sexuality.

LifeSiteNews reached out to the diocese for comment but did not receive a response until the first story on the policy was published May 26.

The statement said the diocese was in full agreement with the Church’s teaching on gender and human sexuality, the diocese’s document is consistent with Church teachings “in its presentation of a suggested pastoral response” to these issues, and was developed with guidance from the USCCB, and also that the diocese did not support allowing transgender bathroom access.

Bishop Gaydos wrote an internal memo to priests on May 31 asserting the policy promoted Catholic moral teaching and affirming his support.

Bishop Gaydos also referred to opposition to the policy and some media reporting as “falsehoods” and a “misinformation campaign.” The bishop told his priests in the letter that he, the diocese and presenters of the policy had been “pilloried on various social media blogs, newsletters and in email campaigns.”

He insisted it was false that the diocese was violating Church teaching on sex and gender or mandating its parishes enroll children from non-traditional families in diocesan schools.

Both LifeSiteNews and ChurchMilitant have reported on the controversy.

Church Militant’s coverage included a bulletin from one diocesan parish where a story from each outlet was reprinted.

An anonymous source within the diocese told LifeSiteNews the parish pastor had been verbally reprimanded by diocesan officials for putting LifeSite’s and CM’s stories in the bulletin.

The call for Tuesday’s pilgrimage was shared on “30 Pieces of Silver.”

“It’s important to continue letting your voice be heard,” the blog states, “but it is also going to take prayer to change this situation.”

Some families drove hundreds of miles to be there, coming from communities such as Kirksville, Fulton, Steeleville, New London, Monroe City, Columbia, and St. Charles County, as well as locally from Jefferson City.

Attendees tell LifeSiteNews the pilgrimage was carried out in humble fashion, lasting some 45 minutes before participants headed back to their cars to return to work or drive home.

To respectfully voice concern over the Jefferson City policy: