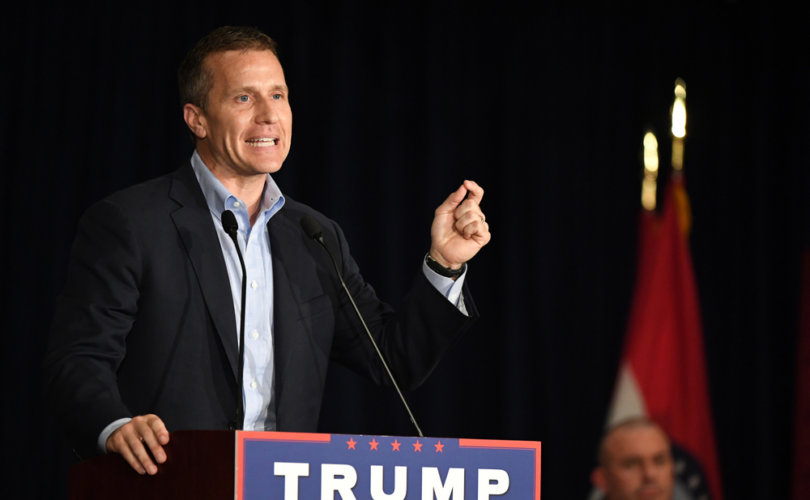 JEFFERSON CITY, Missouri, June 9, 2017 (LifeSiteNews) — Republican Gov. Eric Greitens is calling lawmakers back to the State Capitol on Monday for a special session on abortion because “we need to defend life and promote a culture of life here in the state of Missouri.”

The governor announced Wednesday that he’ll ask the legislature to overrule a controversial city ordinance St. Louis passed in February, which he says makes it an “abortion sanctuary city” and puts pregnancy care centers there “under attack.”

Greitens is also seeking stricter safety regulations on abortion centers in the wake of a federal court ruling in May on behalf of a St. Louis-area Planned Parenthood clinic.

The ruling by U.S. District Judge Howard Sachs tossed out a state law that required abortionists have admitting privileges at a hospital within 30 miles of their abortion centers, and that abortion centers meet the same standards as other ambulatory surgical facilities.

Greitens is proposing “some basic, common-sense standards to keep Missourians safe” that would include annual safety inspection of abortion centers and that the abortion facility must “have a plan for complications,” he said in his announcement, which he posted on Facebook and Twitter.

I'm proud to support life—the lives of mothers, their children, and the innocent unborn. WATCH our call for a pro-life special session. pic.twitter.com/kELtCNrdKC

“We’re proposing a fix that will stop abortion clinics from interfering with emergency responders,” Greitens added.

“If a woman needs help, abortion clinics shouldn't be able to tell an ambulance to come slowly — to not use their lights and sirens — or to go around to the back gate, just because they are worried that an ambulance arriving might make their abortion clinic look bad.”

Indeed, according to Operation Rescue, the St. Louis Planned Parenthood abortion facility is “considered by many to be the most dangerous abortion facility in the nation due to alarmingly frequent ambulance transports that take place there.”

As for the St. Louis “abortion sanctuary city” ordinance, it bans housing and employment discrimination that is based on “pregnancy and reproductive health decisions.”

As Greitens pointed out, “Politicians are trying to make it illegal, for example, for pro-life organizations to say that they just want to hire pro-life Missourians.”

The governor has a strong ally on this front in Catholic Archbishop Robert Carlson, who denounced the ordinance as coercing Catholics to go along with abortion, and has vowed to defy the law if it remains on the books.

The Catholic archdiocese of St. Louis spearheaded a legal challenge in May against the ordinance on several grounds, including that it violates the constitutional rights of religious freedom and expression.

“This horrible piece of legislation will now force city residents to be unwilling participants in the abortion business by requiring business owners and individuals to tacitly approve any 'reproductive health' decisions made by their employees or tenants,” Archbishop Carlson said at the time.

Greitens says the Senate “had a bill to address this during the session, but they failed to act.”

Pro-life advocates have praised Greitens, a former Navy Seal with an Oxford Ph.D. who was elected in January, for his initiatives.

But critics, including some senators, say this session, the second Greitens has called, is an unnecessary cost to the taxpayers.

The first “cost an estimated $67,000 in daily expense money for lawmakers, mileage and additional staff,” according to the Post-Dispatch.

Greitens will hold three rallies this weekend to promote his pro-life measures before the Republican-dominated legislature returns June 12 after a month’s adjournment, it reported.