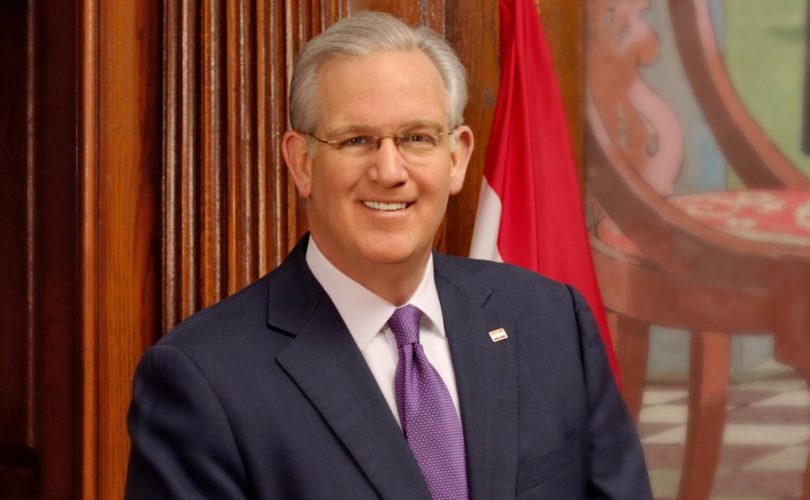 Missouri lawmakers, led by Republicans, have overridden Gov. Jay Nixon's veto of a 72-hour waiting period before women can have an abortion.

In a special legislative session on Wednesday that focused on nearly 160 bill and line-item budget vetoes by Nixon, GOP lawmakers aimed to use their veto-proof majority in the state House and Senate to pass the waiting period law. The Associated Press reports that House Speaker Tim Jones considered the waiting period a priority, along with a tax credit for donations to groups that counsel, shelter, and otherwise provide aid to pregnant women.

According to The Kansas City Star, the waiting period — which has no exceptions — passed on a party-line vote in both chambers. It is considered the second-most pro-life waiting period law in the nation, behind South Dakota's law. The bill originally passed the legislature in May, but while the House had a veto-proof majority at the time, the Senate did not. One Republican missed the Senate vote, which gave Nixon the ability to veto the law.

The House vote Wednesday was 117-44, easily more than the necessary two-thirds majority to override the veto. Senate Republicans cut off a Democrat filibuster and completed the veto override in a 23-7 vote.

Pro-life and pro-abortion advocates reacted to the override yesterday in public statements. Missouri Right to Life President Pam Fichter said, “These bills work together to protect the women of Missouri and ensure that in this matter of life and death, they don't make a decision that will have a detrimental effect on them both physically and emotionally.”

The state's ACLU affiliate released a statement through its executive director, Jeff Mittman, who said, “This legislation was never about helping women, but instead is a way for some politicians in Jefferson City to pursue their own political agendas.”

The president of a political arm of Planned Parenthood, however, said that the override was done by “legislators who … are way out of step with the more than 70 percent of Missourians who wanted them to allow the veto to stand.”

Missouri has a number of pro-life laws already in existence. It requires parental consent for minors to get abortions, mandates that abortionists obtain hospital surgical privileges, and has a partial-birth abortion ban.