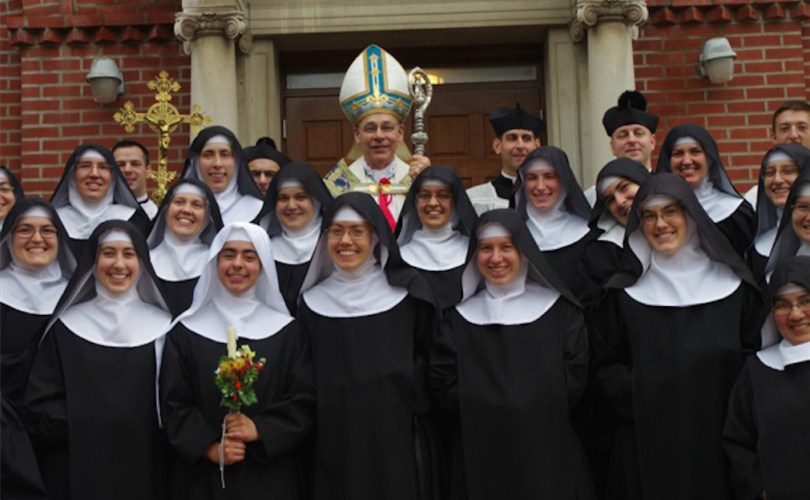 Bishop Robert Finn with the Benedictines of Mary

Hundreds of thousands of Americans know and love what would otherwise be an unknown band of traditional Benedictine nuns living in rural Missouri. Thanks to their glorious singing, which has topped the music charts time and time again, the contemplative Benedictines of Mary are famous.  Their ‘Lent at Ephesus’ album spent 20 weeks at the top of the Classical Album chart this year.

These contemplative nuns are today speaking out in defense of their bishop, Robert Finn of Kansas City-St. Joseph, MO, currently the number one target of the liberal media in America and unwilling to be defended by brother clergy in the country.

“Our Bishop is a man who inspires faith, holiness, and a great zeal for the things of God,” said Mother Cecilia, the young vibrant prioress for the Benedictines of Mary, Queen of Apostles in an exclusive interview with LifeSiteNews.

After praying that someone’s voice would be heard in his defense, Mother Cecilia embraced this unexpected opportunity to speak out on behalf of Bishop Finn, who has been singled out over several years for censuring in the Church’s sex abuse scandal, even leading to a Vatican investigation.

“It breaks my heart that so many people only know about him what they hear from the blaring voices of the media and news outlets which have carried a prejudice against him from the beginning,” Mother Cecilia said. “Our community was shown the tenderness of Holy Mother Church through Bishop Finn.”

Since assuming leadership in 2005, Bishop Finn has taken steps to refocus the diocese’s direction, including changes to staff and programs, and ensuring the diocesan newspaper operates faithfully. These changes have angered liberal Catholics opposed to the Church’s orthodoxy.

“Ten years ago, Bishop Finn was thrown into the midst of a diocese known far and wide for being a hotbed of heterodoxy and dissent,” Mother Cecilia said. “He made necessary and important changes right from the start, and those who were displeased have never forgotten nor forgiven.”

Mother Cecilia has heard many stories from the pre-Finn days, the most poignant being one in which a Kansas City woman described her horror when during his homily, a priest smashed the high altar with a hammer.

“Amidst energies, money and agendas that are directed toward secular and even sinful ‘progress,’ there is a striking lack of sympathy for the spiritual suffering that countless Catholics had been enduring for the previous two generations, where everything they held sacred was torn to pieces before their eyes,” she said.

“These spiritually disenfranchised souls had no voice, no media outlets, no financial resources, no advocate. But they prayed. And Bishop Finn was the answer to their prayers.”

During his time in the diocese, Bishop Finn has fostered explosive growth in vocations to the priesthood and diaconate, opened the cause for canonization of a religious sister, and overseen the building of two new churches, all of which is passed over in media coverage in favor of critics calling for his removal.

“Our Bishop has endured and suffered so much throughout these years,” said Mother Cecilia. She explained that shortly after his arrival, one local paper distributed a scathing eight-page issue dedicated exclusively to biasing the faithful against their new shepherd, placing it in numerous churches throughout the diocese.

“I continue to be amazed and inspired by his humility, charity, and patient resignation amidst so many relentless attacks,” said Mother Cecilia.

Bishop Finn clearly understands the Church’s primary role is to sanctify her individual members, she said, likely the reason he’s drawn the ire of Church foes.

Denigration of Bishop Finn intensified in 2010 after he learned from his vicar general that a diocesan priest had inappropriate pictures of young girls on his personal computer. The diocese immediately notified a ranking Kansas City police officer, and the pictures were provided to legal counsel as well. Both opined that the photos did not constitute child pornography as they did not contain sexual conduct or contact as defined by Missouri law.

The priest was immediately called and told to appear at the chancery the next day, but he did not. He was instead found unconscious in his garage after an attempted suicide. He remained unconscious for four days, and was not expected to live.

After recovering and undergoing psychiatric care, Bishop Finn removed the priest from pastoral duties, and said he was not allowed electronic devices or any interaction with children. When the priest breached those restrictions, the diocese turned him over to civil authorities. Detectives then discovered images of a pornographic nature at the priest's family's home, and he was charged that same day.

Misdemeanor charges were filed against the bishop and the diocese. In order to spare the victims a drawn out jury trial and have the charges against the diocese dropped, which would have likely resulted in crippling insurance increases, Bishop Finn submitted to a one day bench trial and was indicted and found guilty of a misdemeanor for not reporting suspected child abuse.

It was the first case of its kind with a U.S. Catholic bishop. He was placed on probation and agreed to regular visits with the county attorney to discuss any abuse allegations made against the diocese. At the hearing where Bishop Finn was found guilty, the bishop received a “suspension in sentencing,” whereby when his probation was completed, he would have no record. The two-year probation has been completed.

Many see what took place as a political vendetta against the bishop for his orthodoxy and an obvious attempt to make him an example in the Church sex abuse scandal, as the specifics of his case do not involve him perpetrating or willfully facilitating abuse.

The independent investigation ordered by Bishop Finn did find fault with the diocese’s handling of some parts of the process, but the lapses do not amount to criminal conduct, according to Missouri attorney Michael Quinlan, who said the statute under which Bishop Finn was charged, in fact, doesn’t even apply to the circumstances of the case.

Regardless, his critics were further emboldened.

The Church has faced strong criticism for its handling of clergy sex abuse since the scandal broke in 2002, and the narrative has continued through Pope Francis’ establishment of a commission on the matter.

The Vatican sent a Canadian archbishop to the Kansas City-St. Joseph diocese in September for an apostolic visit, assumed to be an assessment of the leadership of Bishop Finn. The result of the visit remains to be seen.

Mother Cecilia has prayed that the voice of truth will be heard in regard to Bishop Finn.

She understands what it is like to be on the periphery as her community has often been shunned for their adherence to the traditional Latin Mass.  Her community is among the many positive fruits of Bishop Finn’s tenure, prospering after he welcomed them to Kansas City-St. Joseph in 2006.

They lead a simple monastic life, inspired by the Rule of St. Benedict, which centers on prayer and work, and their prayer focuses especially on the sanctification of priests. The nuns chant together eight times throughout the day, and support themselves making priestly vestments and sacred linens, and caring for a small farm.

Their counter-cultural witness to the faith is derived directly from Church Tradition, and in an age when countless women’s religious orders are aging and dying out, the young nuns have flourished under Bishop Finn’s spiritual leadership.

“When we arrived in the diocese, we numbered 13 sisters. Eight and-a-half years later, we are 25,” said Mother Cecilia. “We have over 100 inquiries every year, and over 50 young women visiting for a week or so to discern their vocations.”

Four young women joined them this fall, and while they won't count their postulants until they've arrived, it looks as though they may have ten joining next year.

“Bishop Finn has always been a solicitous and loving spiritual father to our community since the moment he welcomed us,” she said. The prioress’ affirming and joy-filled assessment refutes the negative caricature of the bishop rendered in the public eye.

“Bishop Finn has only striven to carry out the mandate given to him before all else by the Church – the salvation of souls,” Mother Cecilia stressed. “But many have forgotten that the Church exists primarily and fundamentally for this: to seek first the Kingdom of God.”

She praises the bishop’s gracious response in the face of attack.

“Regarding the hostility and persecution shown toward our Bishop, I must say with complete admiration, that he has never displayed or spoken in a manner showing any anger or hostility in retaliation of the heaps of it he has himself received,” said Mother Cecilia. “He has always accepted it meekly, and simply continued on faithfully and perseveringly with the commission the Church has given him to build up the mystical body of Christ in truth and charity.”

She credits his caring and committed regard for her sisters as integral to the blooming of the Benedictines.

“He has been a tremendous source of inspiration to each of the sisters,” Mother Cecilia said. “His heroic witness to the faith of the Church, and his quiet determination to reform the diocese despite tremendous opposition is like having one of the saints you read about in history right before your eyes.”

“I guarantee you that Church history will be looking back and telling a different story about this man than the newspapers are at present,” said Mother Cecilia. “There have been many saints that have not been vindicated until long after their death. I have no doubt he will be one of them.”