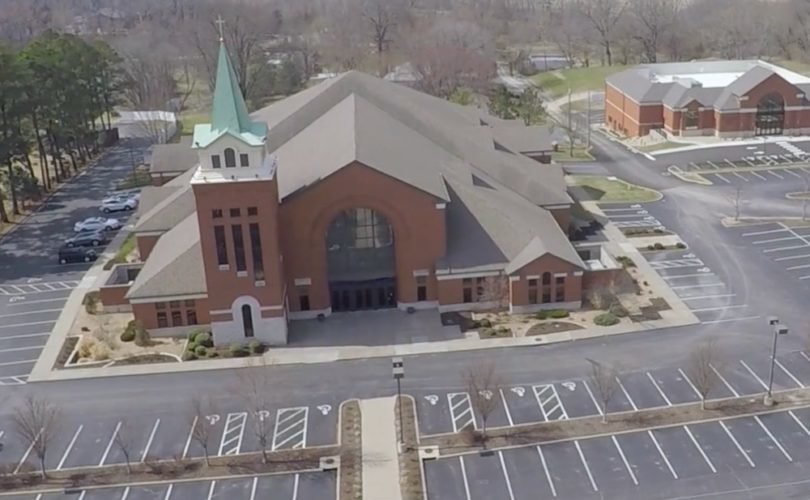 COTTLEVILLE, Missouri, May 21, 2021 (LifeSiteNews) — A large Catholic parish in the Archdiocese of St. Louis is enforcing segregation in the church between vaccinated and non-vaccinated members of the congregation, and banning the non-vaccinated from using the parish hall.

In a May 19 letter emailed to parishioners and posted on the parish website, Msgr. James Callahan of St. Joseph’s in Cottleville described the new measures that would be introduced in the parish relating to COVID-19.

In accordance with guidance from the Archdiocese of St. Louis, he wrote, those who had received their experimental vaccine for the virus would no longer have to wear a mask inside the church or parish hall. Those who had not received the injection would have to continue wearing their face masks.

However, Callahan went further than this, taking measures to separate these two groups of people in the church. In an email sent to parishioners, and obtained by LifeSiteNews, the church has been divided into two sections.

One section was now without the pew ropes, which have blocked off certain pews to enforce physical distancing, and was reserved for the “vaccinated.”

Aside from the peculiar issue of segregation of members of the same congregation, the measures created complications for the reception of Holy Communion on the tongue, a practice which is traditional in the Catholic Church, and a right preserved by the teachings and canon law of the Church. Speaking to LifeSiteNews, a parishioner explained that the areas reserved for the unvaccinated were not in the sections normally able to receive Communion on the tongue, since according to a directive from the pastor, Communion on the tongue could only be administered by the presiding priest.

In order to receive Holy Communion in this manner, members of the congregation would have to leave the unvaccinated section, enter the vaccinated section, and then approach the presiding priest, assuming the new physical layout of the church allowed for this movement.

After presumably facing backlash from parishioners about the scheme, Callahan sent another email to the parish on May 20, saying, “My intention was to accommodate more people at mass safely not to make any one feel like an outcast.”

The updated plans now devote the majority of the church seating to those who had not been vaccinated, and the seating arrangements are such that those in the non-vaccinated area will not have to leave it in order to receive Holy Communion.

Something which has not changed, however, is the use of the parish hall, which according to the May 19 email is for use only by those who have received the experimental vaccine. “For the immediate future, the use of the Parish Hall will be restricted to organizations or groups who have been fully vaccinated. As the restrictions lessen, the Parish Hall will be more widely available.”

LifeSiteNews contacted the parish by phone seeking to ask Callahan, or a parish representative, questions about the division of the church. However, on hearing that the call was from LifeSiteNews, the media representative for the parish began laughing, and mentioned that the parish was not making any comment at this time.

Neither the parish, nor the email, explained how the church ushers would ensure that people sat in the correct place according to their injection status, although Callahan’s email stated that he hoped people would “truly be honest” in the matter.

LifeSiteNews also contacted the Archdiocese of St. Louis, asking if the diocese condoned the segregation of the congregation in the manner that Msgr. Callahan was proposing, but received no response at the time of publishing.

Callahan did not limit himself to describing the new restrictions in the church, but also urged his parishioners to receive the hastily developed experimental vaccine: “I strongly encourage any parishioner who has not been vaccinated to consider becoming vaccinated. If you have a compromised immune system, an upcoming surgery or are pregnant, please consult your primary physician about the vaccine.”

— Article continues below Petition —
PRAYER PLEDGE: Join faithful Germans in prayer to STOP homosexual "blessings" and plunge into schism
Show Petition Text
11001 have signed the petition.
Let's get to 12500!
Thank you for signing this petition!
Add your signature:
Show Petition Text

After referencing the fact that the USCCB has endorsed the COVID injections from Pfizer, Moderna, and AstraZeneca, despite their connection to abortion, Callahan stated: “We have a vaccine that will end COVID-19. Please take the time to be vaccinated.”

Pointing back to the Centers for Disease Control and Prevention (CDC), Callahan reassured parishioners that “these vaccines are remarkably effective and safe,” while adding that some would have to take precautions, such as those with “compromised immune systems or certain pre-existing conditions like heart or lung disease.”

The Defender reported on May 14 the CDC’s Vaccine Adverse Events Reporting System (VAERS) shows that between December 14, 2020, and May 7, there were a total of 192,954 total adverse events reported after COVID vaccination, including 4,057 deaths and 17,190 serious injuries.

The news from St. Joseph’s is accompanied by an ever-growing number of churches mandating vaccines for performance of certain roles in the church, or segregating the congregation according to their vaccine status.

Despite such churches and pastors heavily promoting the injections, and effectively penalizing those who do not receive them, it remains illegal to mandate the injections, due to their Emergency Use Authorization (EUA) status. While the media and health agencies have misreported that the vaccines in use are “approved” by the FDA, the EUA status they have been granted indicates that they are still under investigation, allowed for emergency use only, and under 21 U.S.C. § 360bbb-3 must only be given voluntarily and without coercion.

This was also re-iterated in the controversial December letter from the Congregation for the Doctrine of the Faith (CDF), “Note on the morality of using some anti-Covid-19 vaccines.” While promoting the injections, despite their connection to abortion, and in the face of opposition by faithful Catholic theologians and clerics, the CDF nevertheless stated that vaccination “must be voluntary.”