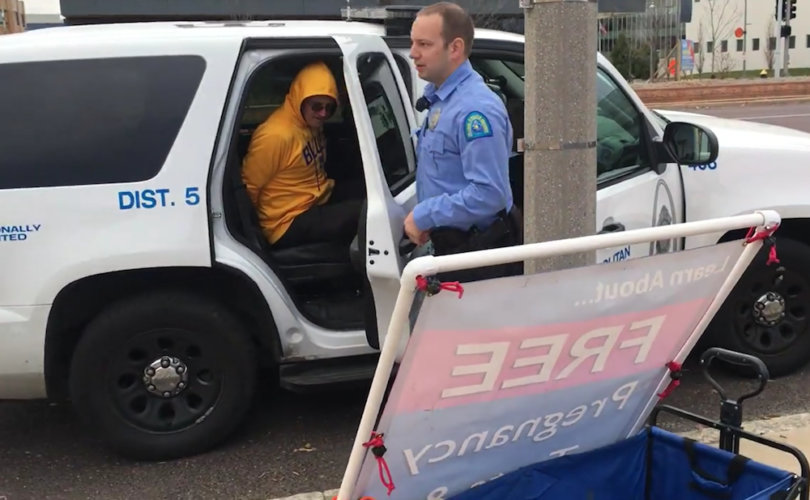 ST. LOUIS, Missouri, January 4, 2017 (LifeSiteNews) — A faithful pro-life activist rang in the new year from a jail cell as he was arrested December 31 on “domestic terrorism” charges at a large Planned Parenthood abortion center even though he apparently never left the sidewalk.

John Ryan was released on his own recognizance on New Year’s Day. He was not forced to post bail, according to Operation Rescue. A hearing is scheduled for January 17.

Ryan, who regularly comes to the abortion center to help women and pray, was seemingly minding his own business on New Year’s Eve morning when police showed up at the Planned Parenthood location, placed him under arrest, handcuffed him, and escorted him to be placed in the back of a police cruiser. He remained there for an hour while police dogs were called in to search the building for bombs, but no one was evacuated. Defenders of the Unborn posted a video of the incident.

“Our lawyer came but the police would not let him talk to John,” Defenders of the Unborn founder and president Mary Maschmeier told Operation Rescue. “Finally, the police opened the window and we were able to speak to John for a few minutes. The police came out of the mill and said no more questions or talking to him.”

Operation Rescue president Troy Newman suggested that the incident could be politically motivated.

Democratic St. Louis alderwomen Meghan Green and Christine Ingrassia are working with the National Abortion Rights Action League (NARAL) to create a buffer zone law that would push demonstrators farther away from the facility. Discussions are scheduled this week on BB 203 to extend the city’s anti-discrimination ordinance to “pregnancy and reproductive health decisions,” creating a protected class for them.

“It appears possible that John Ryan’s suspicious arrest was orchestrated by Planned Parenthood and the St. Louis Police Department to ensure there was a recent ‘incident’ that could be used to support new laws that are meant to seriously hinder the free speech rights of pro-life activists,” Newman said. “There is obvious corruption within the City of St. Louis that is protecting the most dangerous Planned Parenthood abortion facility in the country. It is so important that we expose and oppose this corruption that is endangering women and costing innocent lives.”

The St. Louis-area Planned Parenthood is notorious for its incidents. In the past eight years, there have been 63 documented medical emergencies involving the center. Ryan called for pro-life supporters to increase their presence at the center to let city officials know they will not be scared away.

No one else could explain at the scene why the arrest occurred. Police never spoke with Ryan about the reason for his arrest or to ask his name, and fellow pro-lifers said he never saw him left the sidewalk.

Ryan had a brief discussion with an abortion worker that morning and he believes that might have led to the police call. According to a Facebook posting, Ryan believes the arrest stemmed from false accusations made by a clinic worker with which he had a brief conversation that was witnessed by at least a half-dozen people.

“How would you like to bring in the New Year with a new job?” Ryan asked her. “You didn’t dream of working at an abortion mill when you were a little girl. No little girl dreams of that. What happened to that little girl?”

In May, Missouri’s House of Representatives approved a constitutional amendment protecting the right to life of the state’s unborn children “at every stage of biological development.”