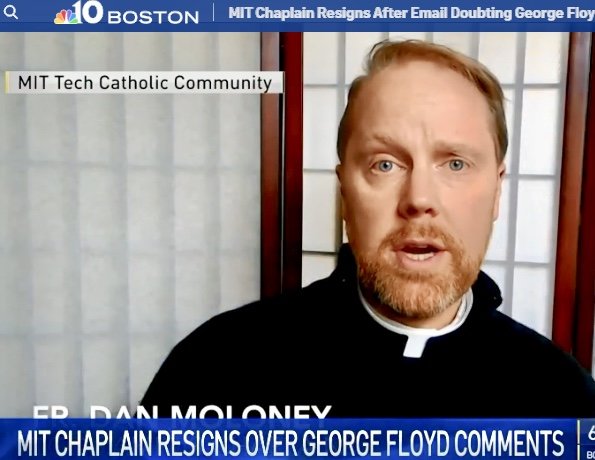 CAMBRIDGE, Massachusetts, June 19, 2020 (LifeSiteNews) – A Catholic priest was forced to leave his position as chaplain at the Massachusetts Institute of Technology (MIT) after sending an email to campus Catholics questioning whether the death of George Floyd was the result of racism.

Fr. Daniel Patrick Moloney, a priest for the Archdiocese of Boston, had been the Catholic chaplain at MIT since 2015.

In the same June 7 email, Fr. Moloney also questioned Floyd’s character, saying that while Floyd shouldn’t have been killed by the police officer, “he had not lived a virtuous life.”

After members of MIT’s Catholic community, troubled by Fr. Moloney’s remarks, reached out to campus and Archdiocesan authorities, the Archdiocese of Boston moved swiftly, asking Fr. Moloney to resign on June 9.

The Archdiocese condemned Fr. Moloney’s intellectual curiosity and honesty, writing: “While Fr. Moloney’s comments should not reflect on the entirety of his priestly ministry, they nonetheless were wrong and by his resignation he accepts the hurt they have caused.”

“The message from Father Moloney was deeply disturbing,” wrote Suzy M. Nelson, a vice president and dean for student life in a statement.

“Those who wrote me and other senior leaders were outraged, and many felt alienated and abandoned by their faith,” continued Nelson. “By devaluing and disparaging George Floyd’s character, Father Moloney’s message failed to acknowledge the dignity of each human being and the devastating impact of systemic racism — especially within the criminal justice system — on African Americans, people of African descent, and communities of color.”

“Moreover, his message dismissed the need for urgent action and change in America,” added Nelson.

Nelson said that MIT would “engage the Archdiocese in nominating a Catholic chaplain whose views and ministry are consistent with the Institute’s values of inclusion, respect, and dignity for all community members as well as the values proclaimed by the Church’s leadership.”

Professor Anthony Esolen defended Fr. Moloney, asking, “Exactly WHAT did he say that was not TRUE?”

“We do not know that Floyd’s killer was motivated by racism. How the hell can we know that?” wondered Esolen in an online comment. “And it does not appear that Floyd lived a virtuous life. What exactly was not TRUE?”

“Why was this email message so controversial?” asked Phil Lawler, founder of Catholic World News and news director and lead analyst at CatholicCulture.org. “Because Father Moloney questioned the popular narrative.”

“The chaplain didn’t say that Floyd’s death was not prompted by racism. He simply remarked that the evidence is not conclusive,” wrote Lawler. “For that he was banished from the campus. For that he was given a public reprimand by his own archdiocese, which announced to the world that his statements ‘were wrong.’”

“Now imagine that a Catholic chaplain on some other campus had issued a statement questioning the Real Presence or the Virgin Birth. Or — this will be a good deal easier — imagine a chaplain who welcomed the legal recognition of same-sex marriage. Would he be forced to resign? Would the archdiocese issue an immediate public correction?” wondered Lawler.

Others called the Archdiocese's response an act of “calumny and slander” that requires a “sincere public apology.”

Some followed the Archbishop’s dismissal of Fr. Moloney to its logical conclusion:

“Just like good men will leave (or never join) the police force if they feel the higher-ups won’t back them, so too good men will flee from a priestly vocation when they see how priests are treated for simply expressing a legitimate opinion,” tweeted Catholic author Eric Sammons, citing Fr. Moloney’s dismissal as MIT’s chaplain.

Just like good men will leave (or never join) the police force if they feel the higher-ups won’t back them, so too good men will flee from a priestly vocation when they see how priests are treated for simply expressing a legitimate opinion.

“Can you imagine recommending a young man become a priest and turn his life over to these wicked, cowardly, apostate bishops?” tweeted Catholic writer and commentator John Zmirak in response.

Can you imagine recommending a young man become a priest and turn his life over to these wicked, cowardly, apostate bishops?

“I regret what happened, I regret it was misunderstood, I regret that became difficult for me to be a voice for Christ on campus,” Moloney told The Boston Globe. “The whole thing went down in a way that I wish were otherwise. … I didn’t want to hurt anybody.”

In a lengthy blog entry, also posted on June 7, Fr. Moloney wrote that the descent of the Holy Spirit at Pentecost produced “a miraculous level of unity, in which everyone lived in harmony, ‘with one heart and one mind (lit. ‘soul’).’ This sort of unity is available to us, if through the Holy Spirit we set aside the sin that divides us.”

Fr. Moloney continued, identifying the dangers entailed in what he calls “justice-only politics” and “cancel” culture:

In my book Mercy, I talk about how a great part of the difference between Christian thinking and secular thinking about politics comes down to mercy, to how we respond to injustices. The mistake of what I call “justice-only politics” is to have well-developed ideas about how things ought to be (aka justice), but no concept of mercy, no real thought about what to do when circumstances and/or people get in the way of their idea of justice.

I think the national reaction to the killing of George Floyd reveals something like this. Some people think that the right thing to do is to enact reforms of the police; others think that the right thing to do is to kill the police and bomb the precinct. Some people think that nonviolent protests are an appropriate response; others think that injustice justifies robbing the local Target. Some people are satisfied when the bad cops are arrested, prosecuted, and convicted; others want to overthrow the government. Some are just so upset that they don’t know what to do. All agree that something deeply wrong happened to George Floyd, but our consensus stops there, at the level of justice.

Mercy is the virtue that comes into play when things go wrong. Once we decide that something is unjust, we still have to decide what is the right thing to do. Do we “cancel” the unjust persons, breaking solidarity with them and removing them from society? Do we send them to the guillotine? Or do we try to make things better? In an interesting Trinitarian statement, Jesus commands his disciples to “be merciful as your heavenly Father is merciful” (Luke 6:36). So justice-only politics, or any politics without solidarity for the offender and the sinner, is not a Christian option.

There are no spiritual shortcuts. To conquer racism requires a conversion to holiness, and a willingness to spread grace and charity to hardened hearts. Only through baptism into Christ’s Ascension can any fallen human being participate in the inner charity of the Trinity. Let us ask the Holy Spirit to transform our lives.

Fr. Moloney has been a lecturer on religion, politics, and American constitutional law in the Department of Politics at Princeton University, where he was affiliated with the university's James Madison Program in American Ideals and Institutions, and was a Senior Policy Analyst at the DeVos Center for Religion and Civil Society at The Heritage Foundation, where he studied policy issues affecting family, religion, marriage and culture civil society in America.

He is the author of the book Mercy: What Every Catholic Should Know (Ignatius Press, 2020).