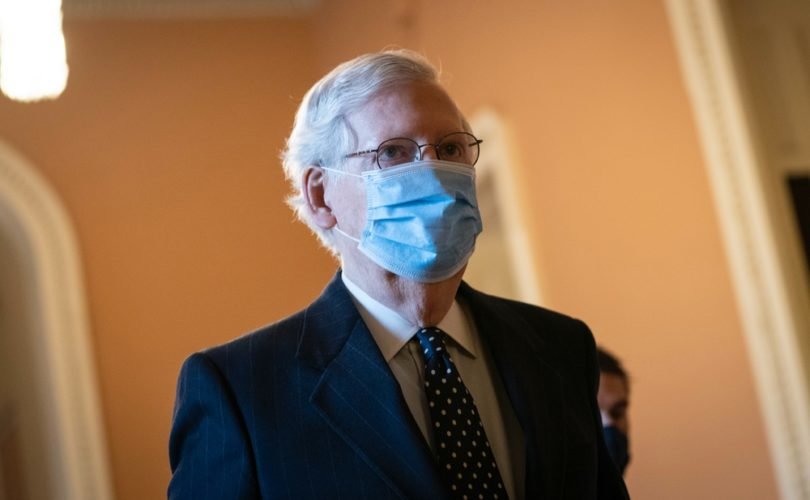 WASHINGTON, D.C., July, 23, 2021 (LifeSiteNews) – Senate Minority Leader Mitch McConnell warned on Tuesday that all Americans could be forced back into lockdown by the fall if more Americans don’t take experimental COVID-19 shots.

“These shots need to get in everybody's arm as rapidly as possible, or we're going to be back in a situation in the fall that we don't yearn for that we went through last year,” the Kentucky Republican told reporters Tuesday.

McConnell’s latest dire warnings come as the daily average of deaths from COVID in the U.S. were just 223 – in a country of 328 million where on average more than 7,700 people die each day of all causes.

The majority of COVID deaths are in seniors, and McConnell, who at 79 is past the American average age of mortality of 78.2 years, is in the “high risk” category for the disease.

It is “cases” that the media have been reporting, however, the majority of which are asymptomatic or have mild symptoms only. The U.S. recorded 42,706 new cases on Tuesday with a seven-day rolling average of 26,306, up significantly from the 15,541 of the previous week.

Support from the left

A high-profile Republican, McConnell suddenly found himself in company with leftists in pitching experimental vaccines to the public.

“Wow. I’ve got to say — and I hope no one ever takes this out of context — I agree with Mitch McConnell,” quipped liberal comedian and talk host Stephen Colbert.

While McConnell did not directly threaten citizens with confinement in their homes or the massive economic and societal hit of business and school closures, he alluded to “a situation in the fall that we don't yearn for” unless more people get the shots – a reflection of the media narrative of a “dangerous fall” ahead.

“It never occurred to me – after three highly effective vaccines were developed in under a year – that we'd have difficulty getting Americans to take the shot,” McConnell said.

‘This was done in one year’

“I say this with some authority, as you all know, being a polio victim myself, and being very aware that it took seven decades to come up with two effective polio vaccines ­­­– this was done in one year,” he said.

“Warp speed” research and development of the shots is one reason many people are wary of the experimental COVID shots that are still in clinical trials until the end of 2022 and 2023, however. The Food and Drug Administration’s reports of blood clotting disorders, hundreds of cases of myocarditis among the young, and most recently the paralyzing neurological condition Guillain-Barré Syndrome linked to the vaccine have not been reassuring.

As of Friday, 11,405 deaths had been recorded by the U.S. Vaccine Adverse Event Reporting System (VAERS) following coronavirus shots, along with 10,223 life threatening events and 11,221 “permanent disabilities.”

Many people opposed to vaccination mandates have raised concerns about deaths among the vaccinated, rather than the unvaccinated, because of concerns published in scientific reports about immune system phenomenon known as antibody dependent enhancement. When lab animals vaccinated with four different types of coronavirus vaccines were exposed to the viruses, they developed antibody protection against the disease but their lungs also became diseased from an immune systems overreaction they called “enhanced immunopathology.”

“Caution in proceeding to application of a SARS-CoV vaccine in humans is indicated,” the scientists from the University of Texas Medical Branch and Baylor College of Medicine warned under a decade ago.

The majority of American adults (68.6) have taken at least one coronavirus shot and 59.7% are fully vaccinated.

In McConnell’s home state of Kentucky, only half (50.4%) of people have received one dose and just 44.8 percent of people are fully vaccinated, according to the Mayo Clinic – making its population more reluctant than the national average.

McConnell did not mention “breakthrough COVID” cases of COVID in fully vaccinated people, including Olympic athletes and several Texas Democrats who tested positive for the virus after fleeing their state in protest of election integrity measures. By the end of April the Centers for Disease Control and Prevention had recorded 10,262 such cases. In May the agency announced it would no longer count COVID infections in the vaccinated unless they wound up hospitalized or deceased, which makes McConnell’s claim that vaccination would prevent any surges questionable.