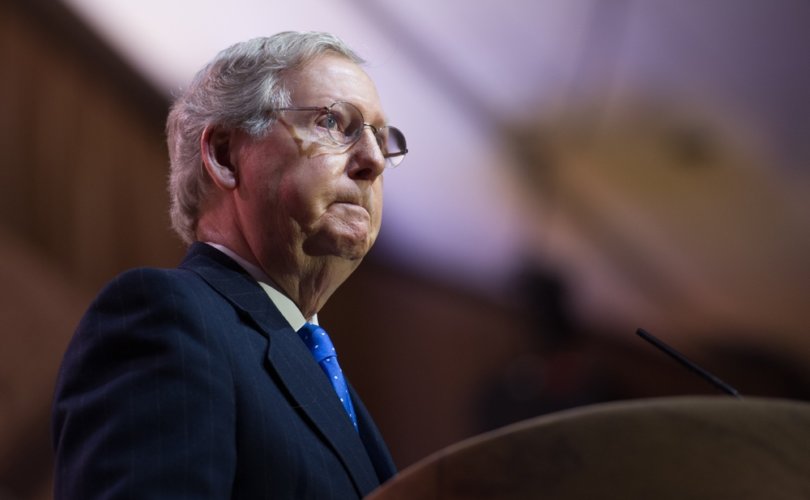 The vandals graffitied the front of McConnell’s home in Highlands, Louisville, with messages saying, “Mitch kills the poor,” and asking, “weres (sic) my money?”

The attack comes after McConnell blocked the increased $2,000 stimulus package proposed by President Trump to replace the $600 package that was passed. The Kentucky senator called Trump’s proposal “socialism for the rich.” In response to the vandalism at his home, McConnell called out the malefactors as having thrown a “radical tantrum.”

The senator went on to say: “I’ve spent my career fighting for the First Amendment and defending peaceful protest. I appreciate every Kentuckian who has engaged in the democratic process whether they agree with me or not.”

“This is different,” he added. “Vandalism and the politics of fear have no place in our society. My wife and I have never been intimidated by this toxic playbook.”

Republican Gov. Andy Beshear gave his support to the senator, echoing McConnell’s words in a tweet, saying that the vandalism to was “unacceptable.”

“While the First Amendment protects our freedom of speech, vandalism is reprehensible and never acceptable for any reason,” he wrote.

Protestors outside McConnell’s home on Saturday were reported to have said that “McConnell has turned his back on the president, on the election,” and that “[McConnell] said he wants to go ahead and certify the election… and it was a corrupt election.”

“I'm very disappointed in Senator McConnell for turning against the President and the Constitution,” Frank Simon stated in a report by WHAS. Simon was standing alongside the group D.C. Under Siege as demonstrators gathered for about 2 hours, protesting McConnell’s stance on the stimulus bill and on the election.

The Louisville Metro Police Department have said there is an open investigation into the incident. No suspects have been named as of publishing.

McConnell was not alone in facing backlash for the failed $2,000 stimulus package.

Nancy Pelosi also reportedly had her house vandalised after the relief vote tanked, with the perpetrators graffitiing the words “cancel rent,” and “we want everything,” as well as an anarchist symbol, on her garage door. There was also a severed pig’s head surrounded by fake blood left on Pelosi’s driveway.

President Trump, in a video released December 23, decried the $900 billion COVID relief bill as a “disgrace,” proposing that Congress might amend it to increase stimulus payments to American citizens from “the ridiculously low $600 to $2000, or $4000 for a couple.” Trump also suggested lowering the cost of the package by “immediately” removing “the wasteful and unnecessary items” from the legislation. He listed a number of programs included in the COVID relief bill that have “almost nothing to do with COVID,” amounting to hundreds of millions of dollars, including $25 million to Pakistan for “democracy and gender programs.”