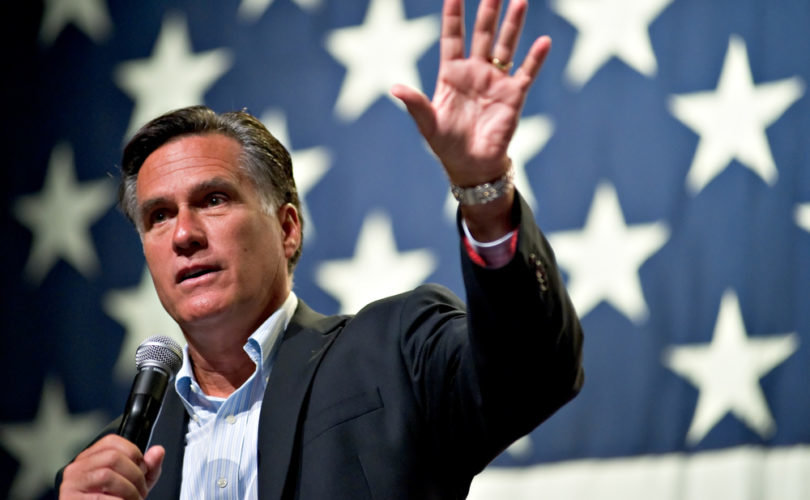 MANCHESTER, NH – Former presidential candidate Mitt Romney has endorsed pro-abortion Republican Scott Brown over his pro-life rival in the primary to see who becomes the GOP's candidate for U.S. senator from New Hampshire.

Brown, who won the U.S. seat in Massachusetts vacated by the death of Ted Kennedy, moved to New Hampshire after losing his re-election bid to ultra-liberal Democrat Elizabeth Warren two years later.

As a Massachusetts state senator, Brown voted for the bill establishing a 35-foot bubble zone around abortion facilities statewide, a law unanimously struck down by the U.S. Supreme Court in June.

The Tea Party, and numerous pro-life groups, initially supported the pro-abortion Brown during a special election in 2010 so he could become the deciding 41st vote against ObamaCare. However, the bill passed due to changes in procedural rules enacted by Majority Leader Harry Reid.

In the U.S. Senate, Brown joined John McCain to end the ban on abortion on military bases in the case of rape, called the 2012 Republican Party platform's strong pro-life language “a mistake,” backed the Obama administration's decision to allow gays to serve openly in the military, and defended federal funding of Planned Parenthood – a position not held by Romney himself.

Brown's chief rival in the September 9 Republican Party primary is former U.S. Sen. Bob Smith, who is now running to regain the seat he held for two terms. During his 18 cumulative years in Congress, Smith had a 100 percent lifetime voting record from National Right to Life. Polls show Brown well ahead of Smith and State Sen. Jim Rubens, a Brooklyn native who supports abortion-on-demand and same-sex “marriage.”

Election analysts took the move as a further sign that the party was trying to squelch more conservative candidates in the primaries.

“His endorsement is a symbol of the [Republican] Party Establishment’s blessing of Brown’s candidacy,” Dante Scala, an associate professor of political science at the University of New Hampshire, told the New York Times. Brown has raised $2 million in the last quarter.

Although widely touted as the most electable Republican in what was once a reliably Republican state, Brown trails incumbent Democratic U.S. Sen. Jeanne Shaheen in fundraising and by 10 points in a Suffolk University/Boston Herald poll conducted last month. His approval rating is also far below hers; 52 percent of New Hampshire voters have a positive view of Shaheen, versus a mere 35 percent for Brown.

That uncertainty, and Brown's social liberalism, has kept most potential 2016 presidential candidates from making an endorsement in the primaries, worried that embracing Brown too early will hurt their standing with their party's conservative base. One exception is Sen. Marco Rubio of Florida, who said in May that he is “a strong supporter of Scott Brown.”

At least one congressman believes Romney's trip to New Hampshire is meant to lay the groundwork for a third presidential campaign in 2016. “I happen to be in the camp that thinks he’s actually going to run, and I think he will be the next president of the United States,” Rep. Jason Chaffetz, R-UT, told MSNBC's Hardball with Chris Matthews on Monday. Although he has repeatedly ruled out running for president again, Romney remains popular in New Hampshire and has the strong support of former Gov. John Sununu.

Sununu also spoke at Wednesday's rally, which was held at Bittersweet Farm in Stratham – the site where Romney launched his 2012 presidential campaign.