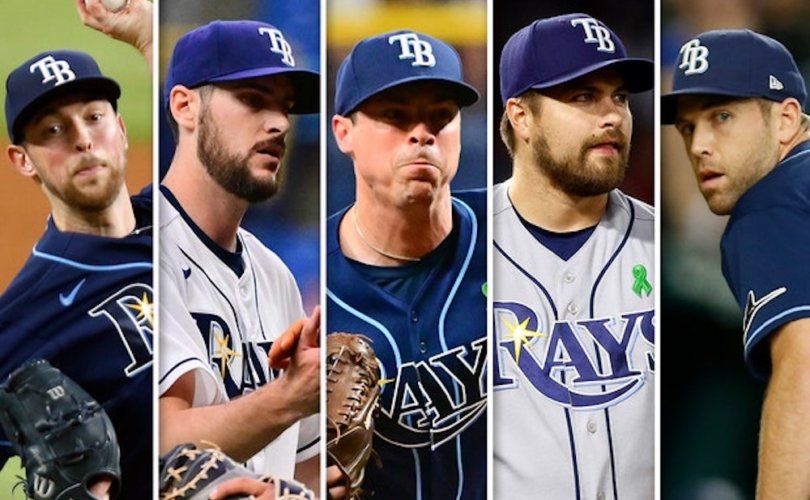 (LifeSiteNews) — The five Tampa Bay Rays pitchers who because of their Christian faith declined to wear rainbow-themed insignias on their hats and jerseys during the team’s “Pride Night” celebration last weekend are being attacked as “bigots” by liberal commentators.

“These folks who bastardize religion to suit their bigotry would do well to actually READ the New Testament. I’d recommend starting with Matthew,” she sneered.

“That religious exemption BS is used in sports and otherwise also allows for people to be denied health care, jobs, apartments, children, prescriptions, all sorts of rights,” averred ESPN commentator Sarah Spain on the sports network’s popular “Around the Horn” talk show.

“We have to stop tiptoeing around it because we’re trying to protect people who are trying to be bigoted from asking for them to be exempt from it, when the very people that they are bigoted against are suffering the consequences,” she continued.

“Got all that?” asked OutKick’s Bobby Burack, in a column for Fox Sports. “Spain has no respect for your religion or any opinions that differ from hers. She represents the party of tolerance.”

“Regardless of your religious beliefs, players should not have to participate in a self-serving social justice campaign,” said Burack.

“Pride Month is a branding opportunity. And according to Spain, it’s now bigoted not to virtue signal,” he added.

“Now they’re trying to cancel people for not wearing a gay pride patch,” added the Daily Wire’s Matt Walsh. “This is always the trajectory for the Left. First they demand tolerance, then acceptance, then celebration, then participation. Learn to say no to these people or it will never end.”

Now they’re trying to cancel people for not wearing a gay pride patch. This is always the trajectory for the Left. First they demand tolerance, then acceptance, then celebration, then participation. Learn to say no to these people or it will never end. https://t.co/02zAKDJx77

“They simply don’t want to wear a Transgender Pride patch. For that, they are branded ‘bigots’ – an attempt to shame them into compliance,” she continued.

“They should not comply.”

“The LGBTQ+ movement demands a level of conformity and kowtowing that we rarely see in America,” Shrier said.

The LGBTQ+ movement demands a level of conformity and kowtowing that we rarely see in America.

Maybe it was originally about “pride,” but now it’s about compliance.

The message to pro sports players: ‘If you are not fully woke, you will be publicly shamed’

“Welcome to the wokeism of sports,” announced Mike Gunzelman in a Fox & Friends First interview.

Gunzelman explained that sports is no longer a refuge or respite from everything else going on in the world.  And professional sports players are being strong-armed into virtue signaling for causes they disagree with or find repugnant, or face serious consequences.

Although Rays team management told their players that wearing the pride patch was optional, “It’s not really,” said Gunzelman.  The careers and lives of the five pitchers — Jason Adam, Jalen Beeks, Brooks Raley, Jeffrey Springs and Ryan Thompson — are now in jeopardy.  “Wherever they go they will probably face protests because of something that was supposed to be optional.”

‘I applaud these men for standing in love and truth’

“It is imperative that sports teams never force employees to participate in messaging and displays outside of sport specific obligations,” noted former NFL player and pro-life hero, Benjamin Watson.  “Same applies to the NFL and justice.”

“I applaud these men for standing in love and truth and … Rays Baseball for supporting their convictions.”

It is imperative that sports teams never force employees to participate in messaging and displays outside of sport specific obligations. Same applies to NFL and justice. I applaud these men for standing in love and truth and the @RaysBaseball for supporting their convictions. https://t.co/5EH6m2FZ9n

“I appreciate these Tampa Bay Rays players who said no to endorsing and celebrating sin during Saturday night’s game,” said Graham in a Facebook post.  “Followers of Jesus Christ must love everyone, but also stand with the truth of God’s Word and share that truth with a lost and dying world.”