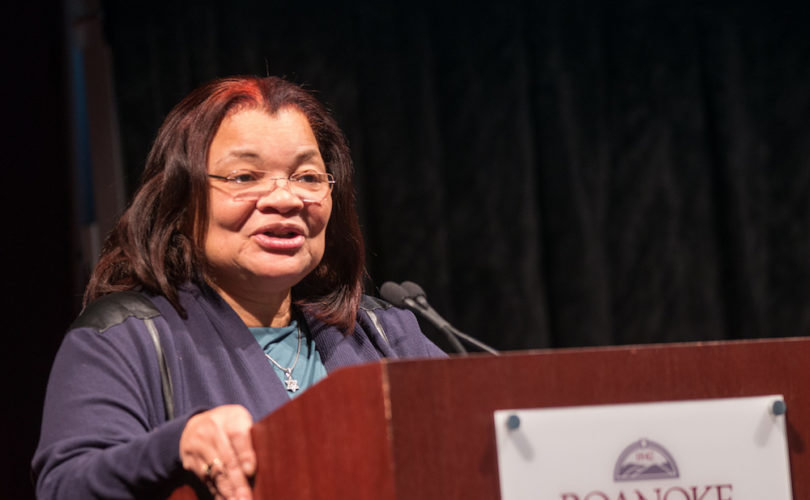 Americans must not tolerate pro-abortion politicians who use the “race card” to deceive black voters into supporting them while ignoring the real crisis in communities across the country, namely abortion, King said in a message released this week on the occasion of Black History Month.

“For at least the last four decades or so, race baiting … ha[s] been used to distract the American people from the plague that has had the greatest negative impact on human life – abortion,” she wrote.

King said race baiting happens when politicians use the “vantage point of skin color or ethnicity as an emotional trigger to stir up the public and distract people from reasonably understanding and responding to pertinent issues at hand.” She called it a “deceptive and counterproductive political practice.”

Race-baiting, along with Bible-baiting and sexism, have “clouded one of the major civil rights issues of our times – the right to be born,” she said.

Politicians must stop this practice, she said, and focus on addressing the real issues.

“For years liberals and progressives have skillfully appealed to the Black communities, vying for the African-American vote while maintaining that abortion is good for blacks and, conversely, that those who are pro-life are somehow anti-African-American.”

“People become so distracted by the racial, gender and religious posturing that they forget just how many Americans are dying from abortion, sickness, poverty, violence and other forms of genocide and eugenics in our nation.”

“Enough is enough! Today we are calling on a ‘cease fire’ of using race, sexism, and religion as emotional fodder to adversely stir the hearts and distract the minds of the people of America from the issues at hand,” she said.

King said that if Planned Parenthood founder Margaret Sanger were around today, she would likely join pro-abortion politicians in pulling the “race card” to advance her “racist” agenda.

“Margaret Sanger, the founder of Planned Parenthood, certainly would want fewer poor people around. Sanger, who happily spoke to a women’s branch of the Ku Klux Klan and received invitations to speak to a dozen more, said: ‘Birth control … means the release and cultivation of the better racial elements in our society, and the gradual suppression, elimination and eventual extirpation of defective stocks – those human weeds which threaten the blooming of the finest flowers of American civilization.’”

King has noted on various occasions how Planned Parenthood disproportionately targets black women, with the majority of abortion facilities located in or near minority communities. In New York City, more black babies are aborted annually than are born alive.

King said pro-abortion politicians who use race-baiting “do not care for us. They care for themselves and their power.”

“The next time a self-proclaimed progressive from any political party uses sexism, Bible-baiting or race baiting to say that abortion benefits the African-American community, ask how the termination of 17 million black babies since 1973 helps anyone.”

“You might be called a ‘devil’ and a ‘racist’ for asking, but those 17 million saints in heaven will call you ‘friend,’” she wrote.