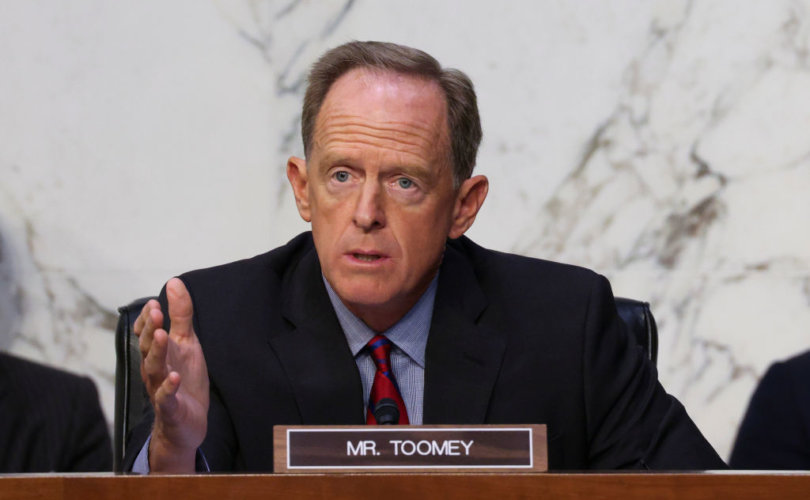 The “Respect for Marriage Act” (RFMA), or H.R. 8404, would enshrine same-sex “marriage” into federal law and require the federal government to recognize polygamy and other redefinitions of marriage if a state legalizes them. The bill passed the House in July with the unexpected support of 47 Republicans, and Senate Democrats have vowed to bring it up for a vote after the midterms.

In a constituent letter obtained by LifeSiteNews, Sen. Toomey noted his previous support of pro-LGBT measures, including his 2013 vote for the Employment Non-Discrimination Act, which would ban “discrimination” based on sexual orientation in the workplace, and his endorsement of the repeal of “Don’t Ask, Don’t Tell.”

Toomey added, however, that he has “consistently fought to protect every person’s right to religious liberty” and that the Respect for Marriage Act would “gravely endanger religious liberty protections” and “go well beyond” codifying the Supreme Court’s 2015 Obergefell v. Hodges decision that mandated recognition of same-sex “marriage” nationwide.

“While the purported purpose of H.R. 8404 is to codify Obergefell, the measure would go well beyond doing so,” Toomey said. “For example, H.R. 8404 would gravely endanger religious liberty protections – a pillar on which this country was founded – for religious organizations that treat differently same-sex and traditional marriage.”

Faith-based adoption and foster care providers and other religious institutions with a nexus to a state or local government “could be forced either to abandon their deeply held religious beliefs, or abandon their mission as providers of these services,” he continued, noting that the RFMA would empower activists to sue religious groups that refuse to comply with its provisions, as top conservative groups have warned.

Toomey’s statement didn’t specify his current stance on same-sex “marriage” itself. A professed Catholic, Toomey said in response to the Obergefell decision in 2015 that he had “long supported the traditional definition of marriage” and disagreed with the ruling but recognized it as “the law of the land.”

But the outgoing two-term senator has declined to announce a public stance on the RFMA since it passed the House months ago and has been one of a few undecided Republicans whose support could determine its fate in the Senate, according to Politico.

His letter follows similar criticism of the bill by other moderate Senate Republicans, including Kevin Cramer of North Dakota and Ron Johnson of Wisconsin. It also comes despite amendments proposed by bipartisan groups of senators attempting to assuage Republicans’ fears about religious liberty. Toomey’s letter echoes recent concerns about the RFMA raised by Heritage Foundation vice president and former Trump official Roger Severino, who blasted Democratic Sen. Tammy Baldwin of Wisconsin and Republican Sens. Susan Collins of Maine and Mitt Romney of Utah for drafting an amendment he described as an “illusion of religious freedom.”

Senate Democrats initially vowed to bring the the RFMA up for a vote by the end of September, but the bill’s sponsors have struggled to find the 10 Republican votes necessary to clear the 60-vote Senate filibuster threshold amid mounting grassroots conservative pushback. Democratic Senate leader Chuck Schumer announced last week that Democrats would delay a vote until after the November midterms in a bid to win over more GOP supporters.

So far, four Republicans senators – Collins, Rob Portman of Ohio, Thom Tillis of North Carolina, and Lisa Murkowski of Alaska – have publicly indicated that they would vote for the measure. Romney has said his backing would hinge on religious liberty protections.

Recent polling shows that the Respect for Marriage Act is broadly unpopular with Republican voters regardless. An Economist/YouGov survey released last week found that 56 percent of Republicans voters oppose Congress passing a bill to codify same-sex “marriage,” compared with only 30 percent who were supportive. More than 40 percent of Republicans strongly oppose such a move.