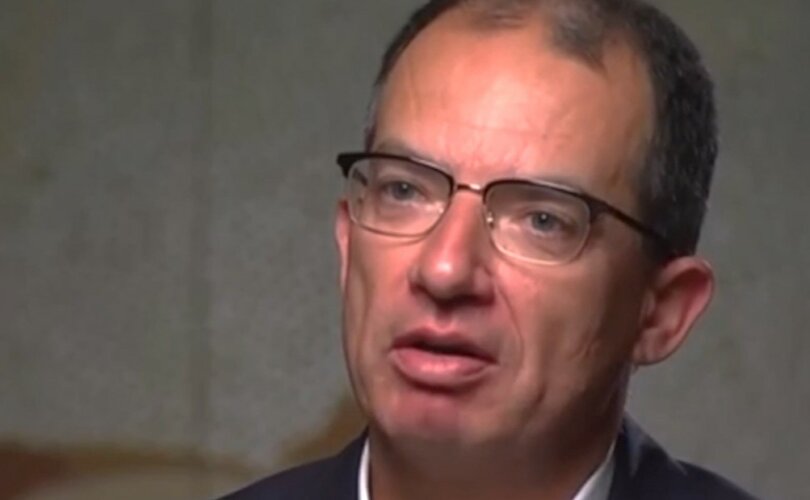 (LifeSiteNews) — Moderna announced the first phase of human trials for an mRNA shot to treat those who have suffered from heart attacks amid mounting reports that the COVID mRNA shots themselves increase the risk of heart attacks.

“We are now in a super exciting program where we inject mRNA in people’s heart after a heart attack to grow back new blood vessels and re-vascularize the heart,” Moderna CEO Stéphane Bancel told Sky News in an October interview, adding, “It’s really like science fiction medicine.”

“We are now in a super exciting program where we inject mRNA in people's heart after a heart attack to grow back new blood vessels and re-vascularize the heart"https://t.co/kI3afoLU89 pic.twitter.com/zNw4rQN0Lv

Moderna announced this week that the new mRNA treatment has been injected into the first trial participants, who have “stable heart failure,” to assess its safety and effects. The shot, mRNA-0184, encodes for relaxin, a hormone that causes changes in blood flow that are “potentially beneficial for heart failure patients.”

The Daily Mail noted that the proposed therapeutic mechanism of the mRNA shot would work via increased blood flow that could help new blood vessels to grow, potentially helping to restore damaged heart muscle tissue.

It should be noted that since mRNA therapy development began in 2012, Moderna had failed to bring a single mRNA candidate to market until the COVID-19 outbreak, and as of May 2020, only one of its mRNA candidates had passed Phase 1 trials.

StatNews noted in 2016 that mRNA-based treatments are “highly risky,” and that “[b]ig pharma companies had tried similar work and abandoned it because it’s exceedingly hard to get RNA into cells without triggering nasty side effects.”

“Novartis abandoned the related realm of RNA interference over concerns about toxicity, as did Merck and Roche,” StatNews continued.

In the interview with Bancel, a Sky News reporter noted, “The irony of COVID is that it really has in some ways allowed you to go and develop these other areas because of the revenues that came through the door.”

There is an even more remarkable irony in Moderna’s mRNA shot for heart failure patients, which is that there has been mounting evidence of heart problems and even heart attacks induced by the mRNA injections, including Moderna’s.

“That’s a huge increase. If this is true, then it’s very concerning indeed,” Malhotra said. He pointed out that while “good science” cannot rely on one study alone, there have been reports corroborating this finding, including a disturbing revelation from a cardiology researcher.

“A few days ago, after this was published, somebody from a very prestigious British institution, [a] cardiology department researcher — a whistleblower, if you like — contacted me to say that the researchers in this department had found something similar,” that is, “inflammation,” around the coronary arteries “linked to the vaccines.”

“They had a meeting and these researchers at the moment have decided that they’re not going to publish their findings because they are concerned about losing research money from the drug industry,” Malhotra shared.

More recently, on Thursday, Malhotra spoke out on BBC News about the heart-related dangers of the COVID shots, drawing attention to the “more than 30,000 excess deaths due to cardiology disease,” as reported by the British Heart Foundation.

Malhotra said his own research has found that the COVID mRNA vaccines are “likely a contributing factor,” since they “do carry a cardiovascular risk.”

“I’ve actually called for the suspension of this pending an inquiry,” said Malhotra, who went on to share that his own father suffered cardiac arrest at home in late 2021 with no readily apparent explanation.

Malhotra said a peer reviewed journal accepted his own finding that “the likely cause of his death was two doses of the Pfizer mRNA vaccine he had six months earlier.’

Indeed, ample research has emerged connecting post-COVID “vaccination” deaths or cardiac symptoms to heart damage from the shots. For example, in late 2022, medical pathologists from Heidelberg University Hospital in Heidelberg, Germany published their research findings that 25 individuals of varying ages had died due to heart damage from a COVID injection, without any underlying heart disease.

A recent study in Taiwan found that almost one in five mostly male teens showed cardiac symptoms after their second Pfizer mRNA injection, and a preprint study from Thailand found cardiovascular effects after the Pfizer injection in 29.24 percent of participants, including tachycardia and palpitations.

In addition, ​​the U.S. federal government’s Vaccine Adverse Event Reporting System (VAERS), which historically has recorded only a small fraction of vaccine adverse events, has reported 33,469 deaths, 188,270 hospitalizations, 18,115 heart attacks, and 26,096 myocarditis and pericarditis cases following COVID injections as of December 30, 2022. It should be noted that the U.S. Centers for Disease Control & Prevention (CDC) researchers recognize a “high verification rate of reports of myocarditis to VAERS after mRNA-based COVID-19 vaccination.”

While downplaying the risks as “rare,” the CDC admitted in April 2021 that “increased cases of myocarditis and pericarditis were reported in the United States after mRNA COVID-19 vaccination (Pfizer-BioNTech and Moderna).”