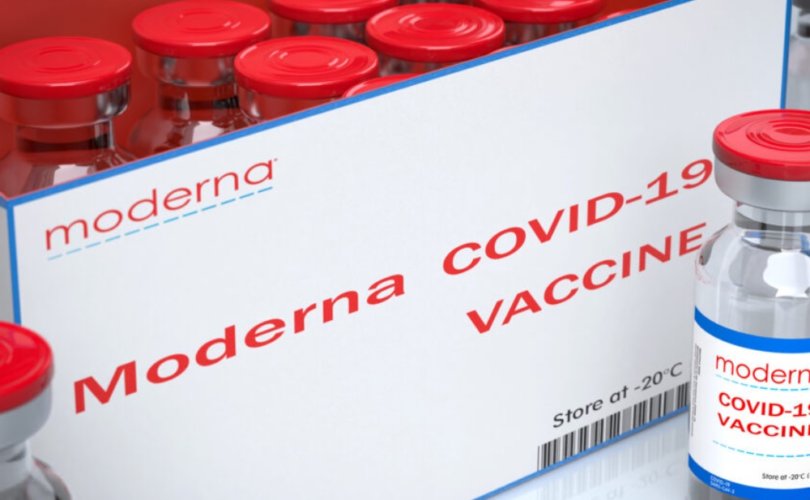 (Children’s Health Defense) – Moderna has announced plans to request Emergency Use Authorization (EUA) for its pediatric COVID-19 vaccine, citing preliminary data showing the two-dose regimen was safe for children under age 6, including toddlers and infants.

Moderna also said the vaccine, when administered at a smaller dose, produced an immune response in the younger age group similar to the response produced by its vaccine authorized for adolescents and young adults, ages 12 to 17.

However, data show the vaccine may not be effective at reducing severe COVID in children, who make up only a small percentage of SARS-CoV-2 infections — most of which are asymptomatic and mild.

Moderna released partial results from its two pediatric clinical trials in 6,900 children showing the mRNA shots were only about 44% effective at preventing symptomatic infection in children 6 months to 2 years old, and only 37% effective in children aged 2 to 5.

The company said its pediatric trials were designed to study safety and the immune response, not effectiveness.

“We believe these latest results from the KidCOVE study are good news for parents of children under 6 years of age,” Stéphane Bancel, CEO of Moderna, said in a statement.

“We now have clinical data on the performance of our vaccine from infants six months of age through older adults. Given the need for a vaccine against COVID-19 in infants and young children, we are working with the U.S. FDA and regulators globally to submit these data as soon as possible.”

Moderna’s pediatric clinical trials were conducted using two 25-microgram doses each — a fourth of the adult dose — and during a time period when the Omicron variant was the predominant strain.

Moderna said the safety profile of two pediatric doses was generally “consistent with that observed in children age 6 to under 12, in adolescents age 12 to 17 and in adults.”

Adverse events were mild or moderate and were more frequently reported after the second dose. No cases of myocarditis — a potentially fatal type of heart inflammation linked to mRNA vaccines — were reported, the company said.

Moderna did not report any details on types of side effects except for data on children who experienced fevers. The company said about 15% of children had fevers higher than 100.4 degrees, and 1 in 500 experienced a fever higher than 104 degrees.

Moderna did not disclose whether children required hospitalization as a result of the fevers or other side effects.

The company said the majority of COVID cases observed were mild and no severe disease, hospitalizations or deaths were reported among any of the children who participated in the trial, making it impossible to detect the vaccine’s protective effect against the worst outcomes.

“The absence of any severe disease, hospitalization or death in the study precludes the assessment of vaccine efficacy against these endpoints,” the company said.

Yet, Moderna said its efficacy results were statistically significant, and lower efficacy against COVID-19 infection due to Omicron was anticipated based on how the vaccine performs in adults.

According to The Washington Post, the company said its statistical analysis showed vaccine efficacy was “above zero.”

Miller said the company plans to test a booster dose in children and is submitting a proposal to regulators to test a third vaccine dose to be administered four months after children complete their initial series of two shots.

In an article on Substack, Alex Berenson, former New York Times reporter and author of “Pandemia,” said, “Moderna claimed in its press release that it believes the shots might reduce the risks of COVID in young children, but the trial showed nothing of the sort.”

“No children in it had severe COVID, so the company could not evaluate whether the shots actually will have meaningful benefit against serious illness. The shots reduced the risk of COVID from the Omicron variant in children by only about 40%, below the 50% level that regulators had generally called the minimum level for approval in 2020.

Recall that the major adult trials from Moderna and Pfizer showed a 95%  reduction in infections against the original coronavirus variant — a finding that far overstated their real-world effectiveness after a few months. A similar decline from the 40% trial figure Moderna reported would suggest the potential for negative real-world efficacy — or increased infection risk after vaccination — in months.”

“Given the weakness of these results and the fact COVID poses almost no risk to kids who are not profoundly ill or morbidly obese, it is not entirely clear why Moderna would try to convince regulators to move ahead,” Berenson said. “Parents have already been very reluctant to have kids aged 5 to 12 take Pfizer’s mRNA jab, and surveys suggest even more resistance for younger kids.”

Moderna has made it clear it plans to go ahead, Berenson added.

Florida Surgeon General Dr. Joseph Ladapo on March 7 said he will issue guidance formally recommending against COVID vaccines for healthy children, making Florida the first state to break with official guidance from the Centers for Disease Control and Prevention (CDC).

The CDC recommends all children over age 5 get the vaccine, despite a study released last month showing Pfizer’s COVID vaccine was only 12% effective against Omicron in children 5 to 11 years old.

According to The Wall Street Journal, children are at an “exceedingly low likelihood of severe illness or death” from COVID.

In 2019, there were 969 deaths in the 5 to 11 age group from unintentional injury and 207 from homicide, both of which surpassed the number of deaths attributed to COVID.

Polio paralyzes 1 in 200 children infected with the virus, and the fatality rate for measles ranges between 0.1% and 0.3%, while the risk of hospitalization from the flu for children 5 to 11 is 50% higher than from COVID and a related condition called multisystem inflammatory syndrome (MIS) combined.

MIS is an inflammatory condition often used as a justification for authorizing COVID vaccines for children.

Hospitalizations among children increased while the Omircron variant was the dominant strain in comparison to previous strains, but still remained significantly low — 80% lower than among young adults.

According to Dr. Anthony Fauci, the White House’s chief medical advisor, many children who tested positive for COVID and were admitted to the hospital were actually hospitalized for other unrelated conditions such as broken bones.

As The Defender reported on March 15, the CDC removed from its data tracker website tens of thousands of deaths linked to COVID, including nearly a quarter of the deaths the agency said had occurred among children.

The CDC said it made adjustments to the mortality data because the website’s algorithm was “accidentally counting deaths that were not COVID-19-related.”

The change resulted in the removal of 72,277 deaths previously reported across 26 states, including 416 pediatric deaths — a reduction of 24% to 1,341, the agency said.

The CDC’s COVID statistics were used to justify which age groups should receive vaccines and were used by U.S. health agencies to support the authorization of Pfizer’s COVID vaccine for children 5 to 11 years old.

CDC Director Dr. Rochelle Walensky referred to the tracker’s death total in November 2021, while pushing for an expert panel to advise her agency to recommend vaccination for all children 5 to 11 years old.

It is unknown whether Moderna will use the CDC’s most recent COVID numbers in its risk-benefit analysis presented to U.S. health agencies to determine whether the risks of COVID outweigh the potential risks of its COVID vaccine in children.

The Moderna shot is currently authorized for people 18 and older in the U.S., while the Pfizer/BioNTech vaccine has been authorized for children as young as 5 years old.

Moderna has faced delays with pediatric vaccines and filed for authorization in adolescents last June, but a regulatory decision was delayed due to concerns that Moderna’s higher dose may increase the risk of heart inflammation in that age group.