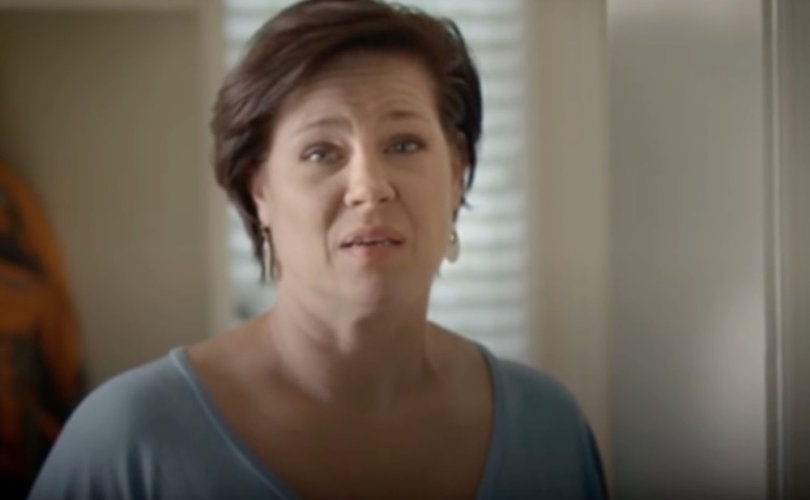 Gina Little of Greensboro, North Carolina, shares her reaction to the law in a campaign ad for Governor Pat McCrory, who signed the bill into law.

“At nine, I was molested by a teenager,” she says. “When I found out that President Obama and [Democratic candidate for governor] Roy Cooper want to force school children to share the same locker room, shower, and restroom with someone who claims to be the opposite sex, I was horrified.”

Cooper, the state’s attorney general, refused to defend H.B. 2, which overrode a local Charlotte ordinance requiring all public accommodations to let anyone who says he is transgender use the restroom, shower, changing facility, or other intimate accommodation of the gender with which he identifies. The state law requires that people use the restroom of the sex listed on their birth certificate. North Carolina allows people to change their birth certificate if they undergo sex reassignment surgery.

“Governor McCrory knows this is not about discrimination, money or politics,” Little continues. “He’s standing up for us under extreme pressure and doing what’s right. Our governor is on our side.”

Other sexual assault victims have raised their objections to the notion of allowing members of both biological sexes to share the same intimate spaces. Three survivors – including one who was molested inside a swimming pool's changing room – recorded their testimonies for the Alliance Defending Freedom, warning that the new arrangement would ease pedophiles' access to victims and trigger traumatizing memories for women like them.

How women feel about being naked and vulnerable in front of biological men is “a piece of this conversation that's been missing,” Kaely Triller says in the video.

The Monmouth poll reports that 70 percent of North Carolina residents believe the bill has harmed the state’s image nationally.

“McCrory is trying to take control of the H.B. 2 debate with a new TV ad. As of right now, though, North Carolina voters feel it has hurt the state, which is helping Cooper’s bid to unseat the incumbent,” said Patrick Murray, director of the independent Monmouth University Polling Institute.

Homosexual activists cited the poll as a net positive, as well. Jay Brown, communications director of the Human Rights Campaign, said, “From Pat McCrory to Donald Trump, those who somehow still believe it’s acceptable to target LGBTQ people with discriminatory laws that deny us equal treatment under the law are in for a rude awakening in November.”

The Monmouth poll is an outlier on where the American people stand on transgender issues, possibly due to its wording.

The poll described H.B. 2 as “the state law that prohibits local governments from allowing transgendered people to use the public restroom of their choice.”

But when WPA Opinion Research asked voters about efforts such as President Obama’s transgender guidance for public schools as “government forcing schools, businesses, and non-profit organizations to open the showers, changing facilities, locker rooms, and bathrooms designated for women and girls, to biological males and vice-versa,” two-thirds of Americans opposed them.

Much of the negative fallout in North Carolina stems from economic pressure. Corporations have aggressively lobbied the state to reverse its stance or lose jobs, and the NBA relocated the All-Star Game from Charlotte to New Orleans over Gov. McCrory’s refusal to back down.

The state’s economic record has been a bragging point for McCrory, a business-oriented moderate Republican who has said the state has “the fastest growing economy in the country.”