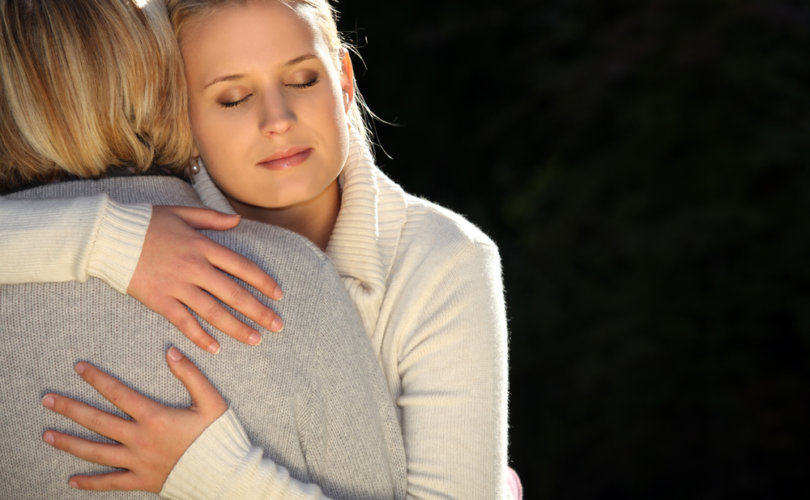 OTTAWA, May 6, 2016 (Priests for Life) — The day Allison Pollard learned about the abortion her mother had before giving birth to her, things started to make sense.

“I was 23 years old and the single mom of a 3-year-old daughter,” she recalled about the day 15 years ago when her mother, Anita Sonntag, told her and her younger sister about the abortion.

“We all cried. My sister and I hurt for our mother and we mourned our brother,” she said. “It’s hard to describe the feeling but it’s like we gained and lost a brother in the same sentence.”

Both mother and daughter will give their testimony at this year’s National March for Life Canada on May 12 at Parliament Hill in Ottawa.  Angelina Steenstra, National Coordinator for the Silent No More Awareness Campaign in Canada, said 13 women and men will speak about their abortion regret during a gathering at 2:45 p.m.

Last year, Allison stood with her mom, holding a sign that says “I Mourn My Aborted Sibling.”  This year she will speak up for her brother.

Anita also remembers the day she told her daughters about their aborted brother, although she doesn’t know why she chose that exact moment to reveal the secret she kept buried for so long. She hadn’t been through healing yet, nor had her pro-life activism begun.

“I think at first they didn’t want to believe it,” Anita said of her daughters. “Then they came and hugged me. I think we were all crying.”

That day began a healing journey for both Allison and Anita. For Allison, things began to make sense.

“I wouldn’t say that I was always aware that I had an older brother but I did feel that I didn’t belong in the role of oldest sibling,” she said. “Someone was missing.”

Anita has been active as the Regional Coordinator for Saskatchewan for the Silent No More Awareness Campaign since 2008. In 2015, the campaign launched a new initiative called Healing the Shockwaves of Abortion, an effort to reach out to all the different groups of people impacted by an abortion. When Anita read some of the work of Dr. Philip Ney on sibling survivors that was included on the Shockwaves website, she discovered “it was like Allison’s life story.”

When Allison went to a Rachel’s Vineyard healing retreat at a site where Anita was on the team, both thought it would be best if Anita did not attend Allison’s sessions.

“Knowing she was in there, it was like, what did I do to this child of mine,” Anita said. And now that Allison is sharing her story in public, Anita said, “I thought it would bother me, because I’m responsible – the cause – of a lot of her pain. But it’s OK, I’m glad she’s doing it.”

Janet Morana and Georgette Forney, who co-founded the Silent No More Awareness Campaign in the U.S. in 2002, will be joining the March for Life gathering once again this year.

“Like the U.S., Canada has no limits on abortion,” Mrs. Steenstra said. “But unlike the U.S., the Canadian government pays for abortion. Through the Campaign, we hope to reach those who have not yet made the choice for abortion, to help them change their minds. And we also want to reach men and women, like us, who did make that choice and deeply regret it. Healing is available for everyone impacted by abortion.”

The Campaign began November 11, 2002.  As of January 2016, the Silent No More Awareness Campaign has held 1,582 Gatherings in 17 countries & 48 states with 5,978 women and men sharing their abortion testimonies. Testimonies have also been shared at 117 high schools and universities in the last 5 years, 14 in 2015. There are 2,405 testimonies posted on the Campaign website, with 395 that are shared via video!  Currently there are 17,049 people registered with the Campaign representing 77 countries.