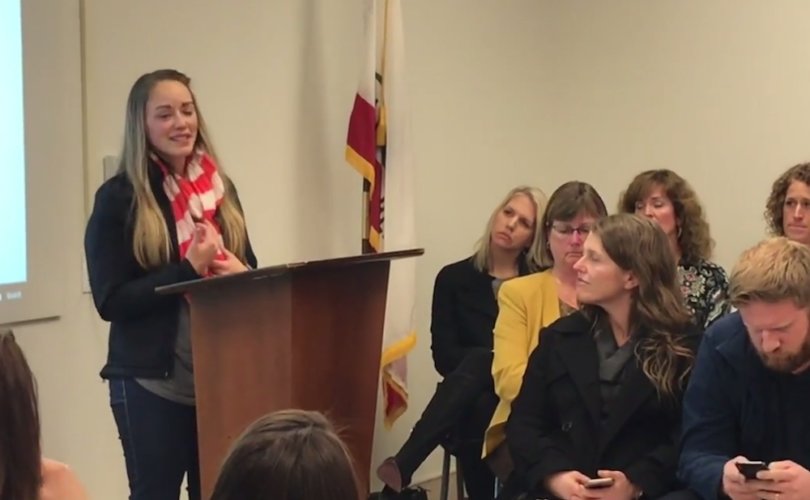 ROCKLIN, California, February 23, 2018 (LifeSiteNews) — A mom whose five-year-old daughter was in a California kindergarten classroom when a teacher read a book on transgenderism and her classmate switched from a boy to a “girl” broke down describing the incident at a board meeting earlier this month.

“Instead, they swept us aside like we were trash, like, we have plenty of children on the waitlist, if you are not going to comply with what we want to do and say to your kindergartener — ,” at which point her voice broke.

She stopped again, on the verge of tears, before adding: “All I would have wanted was the chance to talk to her ahead of time.”

The transgender kindergarten lesson took place at Rocklin Academy Gateway a day before school recessed last summer, but parents were not notified beforehand.

The elite charter school in a Sacramento suburb was subsequently engulfed in a bitter controversy when some outraged parents reported their five-year-olds came home that day traumatized, confused and fearful that they might turn into the opposite sex.

Reports differ on just what happened during the lesson, but all agree that teacher Kaelin Swaney read the pro-transgender book “I am Jazz” to the class at the request of a boy student who was transitioning into a “girl.”

The board and teacher would not verify reports that the boy also changed into girl’s clothes and was reintroduced to the class as a girl with a girl’s name.

Meanwhile, a girl in the class was reportedly sent to the principal’s office when school resumed in late August for “misgendering” the boy by calling him by his boy’s name, according to Karen England, executive director of Capitol Hill Resources.

The mother testified at a mid-February meeting of the Newcastle Elementary School Board, which oversees Rocklin Academy Gateway, that her attempts to find out what took place in her daughter’s class that day went nowhere.

England heard similar stories from other parents at the time of the controversy.

Rocklin Academy board staff “are refusing and they refused even afterward to answer parents’ questions and have referred the parents to their children who were in their class, to the five-year-olds, as to what happened,” she told LifeSiteNews at the time.

The board defended itself by arguing that the California law mandating parental notification and opt-out for sex ed didn’t apply because gender issues are not considered sex education. It also argued that not supporting the five-year-old boy’s gender “transition” could leave it open to charges of discrimination.

As a result of the controversy, 90 children had been pulled from the school, according to a California Family Council (CFC) report.

That includes the two children of the mother, who ironically gave her heartfelt testimony at the Newcastle board meeting in support of a parental rights policy that, if adopted, won’t apply to Rocklin Academy Gateway because of its independent charter status, according to CFC.

Indeed, Rocklin Academy Gateway rejected the same policy last September. It opted instead for a policy that teachers “endeavor to notify” parents of controversial topics discussed in class before or after they happen, and that gives teachers and administrators discretion to decide what is “controversial,” CFC reported.

Crafted by Alliance Defending Freedom and promoted by California Research Institute and CFC, the policy presented to the Newcastle board extends parental notification and opt-out to “discussions of family structures, gender identity, sexual orientation, and harassment.”

An ADF document countering the argument that the policy violates California’s discrimination laws was also distributed to the board, CFC reported.

“I love the policy,” the mother said. Its adoption would “help prevent something like this from happening again.”

The transgender kindergarten lesson “was something that was sprung on our children at an age that I don’t think is appropriate, at least without some parent guidance ahead of time.”

She and her husband had intended to keep their children at Rocklin Academy, she said.

“And for me, it was the fact that they couldn’t tell me what happened to my child in her classroom that day.”

The Newcastle Elementary School Board trustees agreed at the meeting that they would “do some research to consider changing their policy regarding which books should be read in class,” CFC reported.

School gives transgender lesson to 5-year-olds, refuses to give details to parents