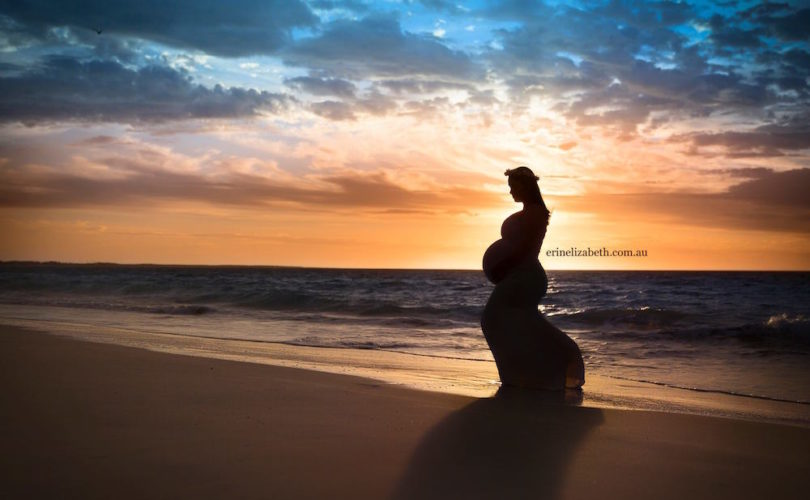 A photo of Kim Tucci at 25 weeks gestationErin Elizabeth Photography

AUSTRALIA, February 5, 2016 (LifeSiteNews) — A 26-year-old Australian mom has given birth to five healthy babies, all conceived naturally, after refusing the doctor’s advice that she must abort three of them in order to give the remaining two a better chance at life.

“After my initial ultrasound I was told I could consider the selection method to give 2 babies the best chance in life,” wrote mom Kim Tucci in a Facebook post last September.

“I watched a YouTube video on the procedure and I cried. I could never do that! Was I selfish for not giving two the chance of 100% survival? All I knew is that I already love them and that every heart beat I heard I connect with them more. For me life starts when a heart starts beating and all I know for sure is that I will do whatever it takes to bring them into this world healthy,” she wrote.

Last Thursday Kim and her husband Vaughn welcomed the five new members into their family — one boy and four girls —increasing the number of their children from 3 to 8. The babies were born at 30 weeks, 10 weeks early, due to insufficient space in Kim’s womb. They weighed on average about 2.5 pounds.

The quintuplets’ story began last March, after Kim and Vaughn had been trying for six months to conceive just one more child for their family. Due to health complications, Kim wondered if she would ever become a mother again.

After what she thought was an extra long cycle, she decided to take a pregnancy test.

“I was feeling tired and a little nauseated and thought I would take a pregnancy test just to get the ‘what if’ out of my head. To my shock and utter excitement it was positive,” she wrote on a Facebook post.

The parents got the shock of their lives when doctors confirmed in an ultrasound examination that there was not one baby, but five.

“After a long wait for the ultrasound we finally went in. The sonographer told me there were multiple gestational sacks, but she could only see a heart beat in two. I was so excited! Twins!”

“I was moved to another machine for a clearer view and had the head doctor come in and double check the findings. She started to count, one, two, three, four, five. Did i hear that correctly? Five? My legs start to shake uncontrollably and all i can do is laugh. The sonographer then told me the term for five is ‘quintuplets,’” Kim wrote.

Even though Kim began to feel stretched to the limit with all those human lives growing inside her, she chose to focus on her babies, and not herself, referring to them as “my five little miracles.”

“It's getting harder as each day passes to push through the pain, every part of my body aches and sleeping is becoming very painful. No amount of pillows are helping support my back and belly. Sometimes I get so upset that I just want to throw my hands up and give in.”

“Sometimes my pelvis becomes so stiff I can barely walk and my hips feel like they are grinding away constantly. I'm finding it hard to eat as I basically have no room left in my stomach, and the way it is positioned it's pushed all the way back with the babies leaning against it.”

“My skin on my belly is so stretched its painful and hot to touch. It literally feels like I have hives! No amount of cream helps relieve the discomfort. I have a lot of stretch marks now. Dealing with such a huge change in my body is hard.”

“Is it all worth it? Yes!!!! I will keep pushing through,” she wrote in one Facebook post days before the babies were born.

The newborns' names are Keith, Ali, Penelope, Tiffany, and Beatrix. They were born at King Edward Memorial Hospital in Subiaco, Western Australia. Mother and babies are reported to be doing well.