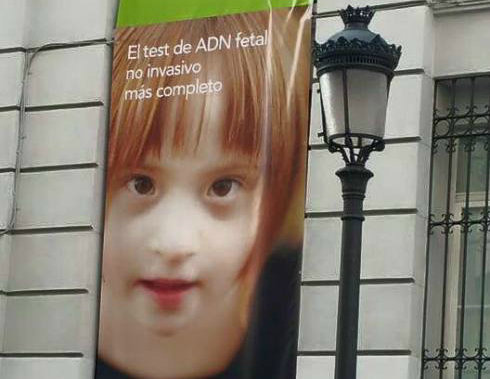 Courtesy of the Hoos family. Used with permission.

ALDERGROVE, British Columbia, June 15, 2015 (LifeSiteNews) — A mother of a young daughter with Down syndrome said she was “infuriated” when she unwittingly discovered last week that her daughter’s image was being used by a Swiss genetics testing company advertising an “early” and “accurate” prenatal testing kit. About 90 percent of parents who discover their pre-born baby has the non life-threatening genetic abnormality of Down syndrome choose abortion.

“To know that this happened infuriated me, but when I saw with my own eyes… her sweet face on that ugly banner, it broke my heart. While my girl courageously fights for her life, this company questions whether she has a life worth living. How dare they,” the mother Christie Hoos wrote on her blog So Here’s Us on Friday.

Christie said she often writes on her blog about life with a Down syndrome child, but never uses her child’s name, and rarely posts photos.

“But once was all it took. Her photo was stolen. A beautiful shot of her face – one of my favourites, posted on a stock photo website and distributed for free,” she wrote.

The image of Christie’s daughter was then used by Genoma, a Swiss bio-medical company that specializes in genetic analysis and diagnostic testing. The company’s new test called Tranquility offers “detection of Down Syndrome and other chromosomal disorders” in an “accurate” and “early” method involving screening a blood sample from the mother.

According to Christie, the image appeared on the front page of the company’s website as well as in a building-sized banner in Spain.

“There’s her face, larger than life,” the mother said. “My daughter has been made the poster child for a prenatal testing kit,” she wrote.

Genoma CEO Frederic Amar has responded with a public letter, stating that displaying the girl’s image “was the result of an internal error of communication” and that the company has since taken down all images in which the girl appeared. Amar stated that the image of the girl was downloaded from an image bank “offering it in an apparent legal way for use in webs [sic].”

Amar appeared to attempt to mollify the mother’s anger in the letter by stating that instead of targeting the unborn with genetic abnormalities for abortion, “genetic tests save lives.”

“Tranquility helps pregnant women to avoid unnecessary amniocentesis which has a risk of harming the unborn child,” he wrote.

But Genoma’s website featuring Tranquility boasts that the test can be taken as early as 10 weeks, which also happens to be a stage in the baby’s development where obtaining an abortion is easier for the mother and less costly. If the test happens to be positive, the company advises women to follow up with their health provider “in order to obtain more information.”

“By informing in advance of a specific risk of developing a disease, or by allowing a very early diagnostic of a disease, Genoma helps you to take on time the right medical decisions. Your baby or yourself can receive immediately the adequate medical treatments,” the website states.

Pro-life activists have long decried the existence of an entrenched medical bias against pre-born babies with chromosomal abnormalities, which they say usually results in doctors advising parents to choose abortion as a ‘medical treatment’ for their baby instead of life.

Amar, in a statement that appears to indicate his awareness of the real purpose of genetic testing, said in his letter: “Any other considerations are beyond our scope.”

LifeSiteNews asked Mr. Amar for comment by email, but did not receive a response by press time.

Christie said that it’s no secret that genetic testing of unborn babies is carried out primarily for eugenic purposes, not for altruistic reasons or “parental preparedness.”

“I find [that] morally reprehensible. But even that is beside the point – they had no right to exploit [my daughter] to sell their product,” she wrote.

LifeSiteNews reached out to the parents for comment, but learned that due to an intense chemotherapy treatment that their daughter was undergoing they would not be available for an interview.

The girl’s image is hosted on www.FreeLargeImages.com, a domain name registered in Istanbul, Turkey. The girl’s father Glen Hoos has demanded that the image be removed, but to no avail. It still remains posted for anyone to use.

“The image at the top of this page (girl in black shirt) is my daughter, and we have not consented to its use. Please remove it immediately,” he posted on the website hosting his daughter’s image through his Facebook account.

Instead of deleting all social media instances involving their daughter, the girl’s parents have decided to fight for her right to privacy.

“Where initially I considered taking all our photos offline, deleting my social media accounts and hiding in my house for the next 10 years, now I’m determined to weather the storm. We will not flinch. We will not hide. My daughter is beautiful and her life is worth celebrating,” Christie wrote.

“They broke the law. This heartless company that used my daughter’s photo without our consent, or that of our photographer. Legally a copyright infringement, but also breaking what is referred to in copyright law as ‘moral law’ since her image was used in a derogatory fashion. They insulted and abused my innocent child in their pursuit of profit. They broke faith with common human decency. And the world is watching.”

“What’s worse (for them), they angered this Mama Bear,” she wrote.