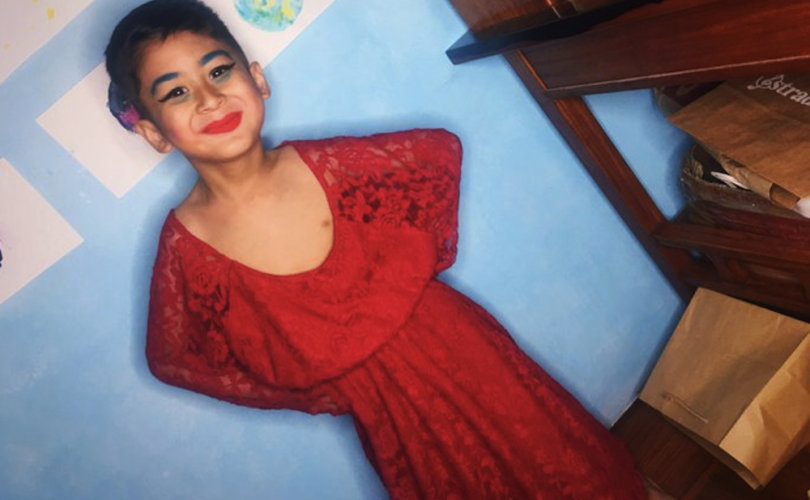 'K' dresses as a drag queen.

So the 26-year-old mother made her son a drag queen, complete with gobs of makeup, false eyelashes, and a glamorous dress. She then distributed photos of her son dressed as a girl to the world via social media.

“It's the cutest thing you'll ever see!” the mother posted, oblivious to the effect of what she was doing to her boy's self-image. “He had me do his wings, insisted on eyelashes, ate carefully to not ruin his lipstick,” she tweeted. “Me: You’re beautiful! K: Ma, we need to buy a wig.”

She encouraged the boy to make up a drag queen name (“Balloon Liteg”). “K” even dubbed his mother, who also glamorized herself, “Cat Astrfi.”

Of the several photos Jorge published July 4 on social media, one is most disturbingly pedophilic in nature. Jorge dubs it “Sashay.”

Of course, the homosexual media gushed over the boy in drag. “Mom gives her son fabulous RuPaul’s Drag Race makeover” was The Blade's headline.

APlus opined, “We love how his mother was totally open to aiding him in activities often deemed unacceptable in today's culture in regards to gender.”

Other approvals showed just how far society has accepted this type of behavior. A publication as mainstream and traditional as Good Housekeeping praised the mother's actions. “No matter what others say, both Jorge and her son look like they had an absolute blast.”

But children’s’ advocates say such parental gender bending is detrimental to a child’s development and healthy self-image.

Former transgender Walt Heyer understands the effects of authority figures gender-bending vulnerable youth. His grandmother abused him by sewing dresses for him to wear. Hence, he ultimately began identifying with an opposite sex alter-ego, “Chrystal.”

“Being a girl was where I got the adulation, all the things I desired,” Walt explained. “I felt loved, cared for. People don’t realize how powerful that is, what an influence it has on young people.”

Heyer underwent a “sex change” operation and spent nearly a decade living as a woman. Eventually, Heyer turned to Christ and away from life as the opposite sex.

Heyer sees the world falling for the lies his life was ruined by. “We are witnessing the parental emotional child abuse of gender cross-dressing, and the unfortunate consequences will last a lifetime,” he told LifeSiteNews.

“Parents who introduce or encourage homosexual ideology with cross-dressing are not parenting but rather are using their kids in a social sexual experiment that will not end well for the child,” Heyer explained.

“I know,” Heyer related.  “I was a cross-dressing four-year-old kid. I have literally lived through the brokenness,” he shared.

“Cross-dressing kids has become a contagion of madness that some parents think is a fun game, but they are dead wrong.”

Ironically, Jorge is an author offering parenting advice on “being raised by the kid you’re raising.” She shares, “I went from little girl, to little girl with a little boy. At 20, I was leaking breast milk from under my PE shirt and rushing to pump before my neuropsychology class! I'm parenting while still growing up myself, and finding I'm learning a lot more from my son than I'm teaching him.”

Viacom distributes RuPaul's Drag Race, the highest-rated television program on Logo TV. For its latest season, the show moved to VH1 to expand its audience. The pro-homosexual Emmy award winner also airs in Australia, Canada and the UK. A spinoff show is RuPaul's Drag Race All Stars, and the latest “All Star” winner was “Alaska Thunderf**k.”