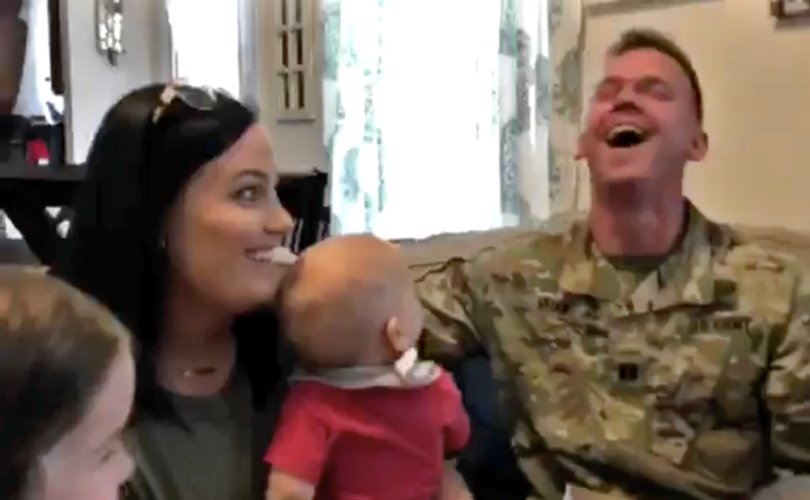 May 24, 2018 (LifeSiteNews) – A mother surprised her husband and five children that their family is getting two new additions in a Facebook video that has captured thousands of hearts on social media.

Chelsea Shaw is a self-described conservative Christian and LifeSiteNews reader. She and her husband Jonathan, who serves in the United States Army, currently have four boys and one girl, all under age seven.

In a video filmed by her mother-in-law and posted last month to Facebook, Chelsea revealed what happened when she pulled a “fast one on dad” while sharing the pregnancy news with their kids.

With the whole family gathered on the couch, Jonathan opened a present containing an envelope, which in turn held an ultrasound photo. “This is a special picture of the inside of Mommy’s belly,” he explained to his kids, telling them that another baby was growing inside of her.

But while dad quizzed them on whether they would prefer a new brother or sister, mom dropped a second envelope on the box, and it was his turn to be surprised.

“Is this what I think it is?” Jonathan asked, barely able to contain his surprise. “Is it two? Oh my gosh!”

“You guys, there are two babies in Mommy’s belly,” the father said between laughs of shock and joy. “Are you serious?” he had to repeat to make sure.

“This is what my belly looks like right now, Chelsea confirmed to the kids. “There are two babies in my belly.”

“I came up with that plan to tell him in the 30 minutes after I finished my ultrasound,” Chelsea told LifeSiteNews. “I called my sister and quickly brainstormed some ideas about fun ways to surprise him! It’s kind of a once in a lifetime event to be able to give that news to your husband! And I think it went more perfectly than I could have imagined!”

Their kids are overjoyed by the news, too, from praying for the twins nightly to kissing their mother’s belly to say goodnight to their siblings. “Even my 2 year old talks about them a lot,” Chelsea says. “It really warms my heart that we are teaching them to love babies from an early age, just by having them.”

Both of the Shaws went into their relationship wanting a large family, which is an expression of their convictions that life is sacred, and that “there is goodness in suffering.”

“As Christians, to know that Christ’s incarnation began from the moment of conception – he wasn’t Jesus only after he was born, but for the entirety of the Mary’s pregnancy – means that our own humanity begins from the moment of conception,” Chelsea says. And while even many in modern Christianity have succumbed to the assumption “that children are not worth the suffering they bring,” she says that the struggles have been a blessing.

“I also think that having lots of kids, immediately after getting married, really forces you to rely on and communicate with one another in ways that we wouldn’t otherwise have to if we waited a while to have children,” Chelsea explains. “In a family with lots of children, I think the kids learn kindness, patience, to put someone else ahead of themselves, that life isn’t fair, that the world doesn’t revolve around them. I think they have to learn to communicate with and have compassion for numerous other people everyday.”

That’s not to say she never had doubts, but God has never let her down.

“God has sustained me and proven He is trustworthy time and time again, through moves, health issues, even a deployment,” she says. “He’s given me lots of fantastic neighbors, amazing friends both locally, and in Facebook groups that have mailed me cards and gifts and always been there to check in on me. I think this is crucial to surviving this life, especially when your families live so far away.”

Since it was originally posted, the video has been viewed approximately 94,000 times. As for whether the family is getting new brothers, sisters, or one of each, that’s one surprise they’re still anticipating.