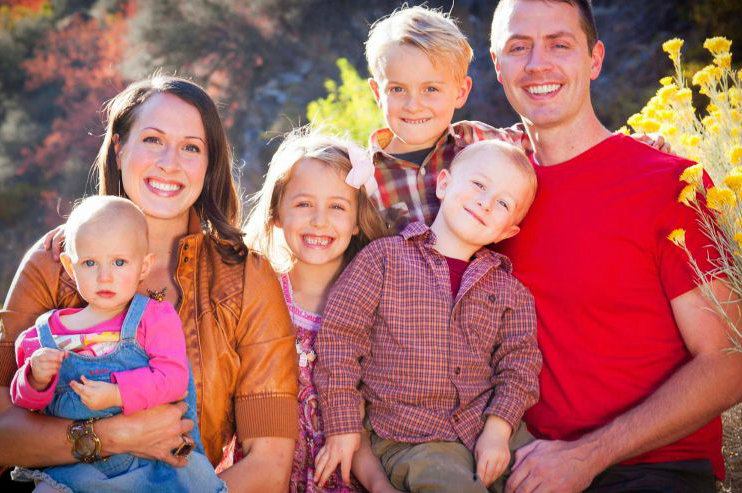 A Mormon mother of five living children has passed away at home after refusing cancer treatment that could have harmed her unborn sixth child.

Kathy Taylor, 34, was first diagnosed with malignant melanoma, the deadliest form of skin cancer, in 2007.  She had surgery to remove the growth from her back, and subsequent tests showed she was in remission.  But seven years later, newly pregnant with her sixth baby, she discovered another suspicious spot on her back, and went in to have it tested.  Doctors informed her the cancer was back.

Taylor and her husband, Nathan, decided that due to the pregnancy they would wait before pursuing treatment.  Experts at the Huntsman Cancer Institute endorsed the choice – at the time, extensive scans showed the cancer was completely contained within the tumor in Taylor’s back, and there was a new, more effective cancer-fighting drug set to become available in the latter half of her pregnancy.  If Taylor and her baby could just hold on long enough, there was a chance the baby could be born full-term and Taylor would be able to receive state-of-the-art treatments that would be unavailable to her if she opted to act immediately.

Unfortunately, at 26 weeks pregnant, Taylor’s doctors gave her disturbing news: The cancer had metastasized, and was spreading like wildfire throughout her body.  Several of her organs were in danger of shutting down, especially her liver, which the cancer had ravaged.

Doctors wanted to take her baby and begin aggressive treatment immediately, but still, Taylor refused.  She wanted to give her unborn child the best possible chance at life, and 26 weeks was simply too early for her to choose to deliver him.  Despite her doctors’ dire warnings, she held on for three more weeks, trying to give her child time to grow and develop in the safety of the womb.

On September 11, doctors felt they could wait no longer – Kathy’s liver was about to fail.  Baby Luke Taylor was delivered weighing less than two pounds, and Kathy began receiving aggressive anti-cancer treatment, albeit not the newer treatment she had hoped to receive, since it had yet to receive final approval from the FDA.

Sadly, little Luke’s life was short.  The tiny preemie died of an infection just days after his birth.  But his mother held on, begging God to give her just one more Christmas with her remaining five children.

“Kathy’s desire was to make it past Christmas, for the kids,” wrote Nathan Taylor on the family’s blog. “In our case, God let it happen; and many people made sure this Christmas was unique and special for our children, and I know they will never forget it.”

Calling his wife a “woman of unwavering faith,” Mr. Taylor said that both he and his wife took comfort in the knowledge that her suffering will not be wasted.

“It was so hard to see,” Taylor wrote. “I knew though, as it was all happening, I kept telling myself that this pain would one day be consecrated for [Kathy’s] gain.”

“I kept thinking…wow…Kathy is supposed to endure this and she is doing it,” Taylor wrote.  “I really cannot express how happy I am that she endured it well. I believe we will feel much more comfortable, when we go sit with the greats; who suffered and overcame, if we too have done the same.”

“Even Christ; with faculty unchallenged by any man ever to live, had to come to earth in order to descend below all things so that by his experience he could understand how to give succor,” Taylor pointed out. “To watch my woman who was so good and pure go through this experience has made me realize how God truly works to mold us into something higher than what we ever expect of ourselves.”

Shortly before her death, Kathy Taylor recorded a cover of Sarah McLachlan’s “I Will Remember You,” which McLachlan herself took note of and shared on social media.  Those wishing to contribute to the Taylor family’s expenses may do so by downloading the song for $0.99 at iTunes.  All proceeds benefit the Taylor family.