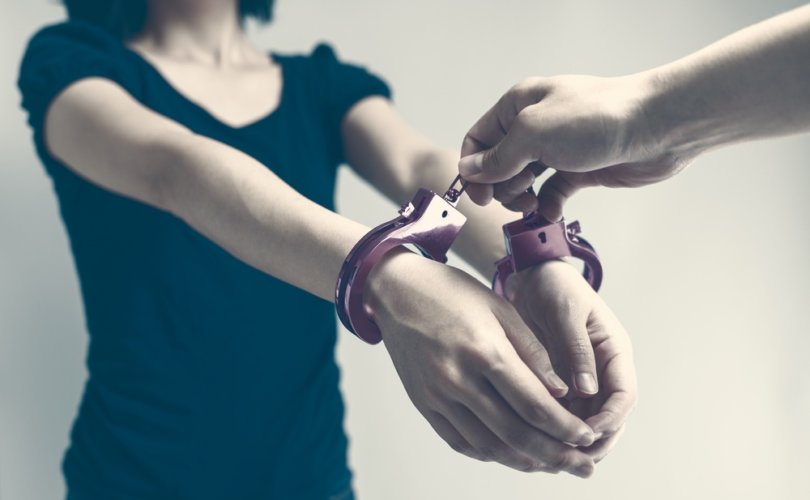 TORONTO, ON (LifeSiteNews) — A video of a Catholic mother of eight being hauled away from an anti-Trudeau protest went viral this week.

Trudeau’s executive guards drag away a senior woman who has the wrong political opinion.

Sorry, but grandmas are not the villains in this equation. pic.twitter.com/dyJTc0Nmsb

Meet Kim Riddell. Now retired, Kim worked as a corrections officer in a female maximum-security prison for 25 years. She is a faithful Catholic, and a proud Canadian patriot.

Kim told LifeSiteNews via Zoom yesterday that her reasons for opposing Justin Trudeau are based in her belief that Canadians have rights that they are owed by the Charter and the Bill of Rights, and that lockdowns have illegally taken those rights away from innocent citizens.

Kim said she has always had an instinct for standing up to unjust government maneuvering, and with the advent of sweeping lockdowns in March of 2020, she became active in opposing what she believed was government overreach.

When asked about her initial foray into anti-lockdown advocacy, Kim said, “Well, I first heard about the lockdown protests going on in Toronto after Doug Ford mentioned on the news ‘There are a bunch of yahoos gathering at Queen’s Park.’ I noticed other cities in Canada were having gatherings to protest lockdowns in other cities on Saturdays, and I realized they would be doing this every Saturday.”

Given the social pressure to conform to the narrative surrounding lockdowns, protesting the government policies at the beginning of the pandemic was considered taboo, even amongst generally well-meaning conservative Canadians. However, Kim was convinced that there was something wrong about what was happening.

She said: “Somehow, early on I realized that part of the narrative was that churches were the ‘super spreaders.’ They talked about a church somewhere in Korea;  it was supposed to be a giant super spreader event. I knew that the stories just didn’t add up, and that story struck [me] as ‘This is going to be the narrative ongoing, and there’s going to be a persecution of our churches’.”

Convinced that the lockdowns, especially church closures, were unjust, Kim continued to attend the events throughout the summer and fall.

“I have attended many of them, and I have befriended a lot of the people who are heavily involved,” she told LifeSiteNews.

Kim described the diverse array of people who attend the anti-lockdown rallies, all concerned for a variety of reasons.

“It’s really a diverse cross-section of society,” she said.

“There is a disproportionate percentage of people who come from Eastern Bloc countries; either their parents have come or they’ve come directly out of Communism, and those are people who not surprisingly know what’s happening,” she continued.

“There are a lot of Christians, a lot of Catholics, people of every stripe of our society in Canada.”

Kim continued to attend the anti-lockdown events throughout the winter when police forces seemed to clamp down on protestors. Kim thinks that the change in weather had something to do with the fact that more arrests and charges took place throughout the winter months. In her opinion, the crowds became much smaller when the temperature dropped, and so the police officers had an easier time corralling the crowd.

Kim has been ticketed for her participation at protests, she explained.

“I’ve not had very good luck you might say, having been accosted in one way or another – you might say arrested – six times since January,” she said.

“I don’t know why I seem to be an easy target; it might be the white hair or the dress, not really sure.”

She described a night she spent in jail after being taken away by police officers:

Back in February I was walking through Queen’s Park. I had a sign, and it was a really small turnout because it was a really miserable cold day. And I was approached by police, I was ticketed, I provided my name, etc.  They said I must leave the park immediately… I was going in the direction of my car, they grabbed me, surrounded me, didn’t really give any real reason for the arrest. They put me in handcuffs and threw me in the back of their court vehicle, and put me behind bars at the 22 Division and kept me for about 12 hours. They let me go around one o’clock in the morning.

Kim’s friends in the anti-lockdown movement worried that she might have been scared from her encounter with police, but she said, “I’ve got a 25-year career as a prison guard, where I walked on the other side with all the inmates out, so being alone in a cell wasn’t scary for me.”

— Article continues below Petition —
PETITION: Ban COVID vaccine mandates for schools and universities!
Show Petition Text
39761 have signed the petition.
Let's get to 40000!
Thank you for signing this petition!
Add your signature:
Show Petition Text

Throughout her time advocating for the rights of Canadians, Kim has become convinced that the Canadian Bill of Rights needs to be considered more strongly. Much of the rhetoric surrounding freedom advocacy in Canada is centered on the Canadian Charter of Rights and Freedoms. In her opinion, this is insufficient. While both documents list the rights that Canadians are owed, the Charter begins with the statement, “The Canadian Charter of Rights and Freedoms guarantees the rights and freedoms set out in it subject only to such reasonable limits prescribed by law as can be demonstrably justified in a free and democratic society.”

Kim believes that the mention of “reasonable limits prescribed by law” has led to the justification on behalf of lawmakers to ignore the rights of Canadians during the lockdowns. The Bill of Rights does not contain such a clause.

“The Canadian Bill of Rights refers to our natural rights as beings created by God,” Kim continued.

“So my rights come from God, not the government.”

Kim spoke about the difficulty in fighting the government with a Charter dispute and said that it is too expensive for most people to do.

“You basically need a wheel barrel of money to make a Charter challenge to these unlawful and unjust tyrannical laws that we are facing,” she said.

Kim Riddell’s efforts and sacrifices have not gone unnoticed, and she was invited to speak at an event in support of Pastor Coates, the Protestant pastor in Alberta who was imprisoned for more than a month in the spring.

LifeSiteNews has obtained the script that Kim read while speaking in Alberta. She emphasized the Natural Law and our duties to God to obey the Ten Commandments. She said, “Our rights as individuals come directly from our duties to God and one another.”

She added, “the essence of Liberty is the ability to fulfill our duties. Rights and duties are inseparable.”

“In today’s present crisis we see a terrible persecution of people of faith. We have been commanded by the Mosaic Law to keep the Lord’s Day holy. Our government must ensure Canadians are not restricted from fulfilling this duty!”

At the end of the interview, Kim discussed the importance of fighting the restrictions.

“Don’t allow these little arrests [to] intimidate us,” she continued.

“I think that’s possibly why God permitted me to be the one to be arrested: because I don’t have the same fear as maybe somebody else might have. I come from a background in criminal justice, [and I know] there are limits to what they can do… and I’m retired, I’m able to do this, my children are mostly grown. I don’t have the fear of reprisal from an employer, so I’m out there doing what I can for my fellow Canadians and my family.”

Kim concluded, “Be courageous, don’t be afraid, be on the right side of history!”