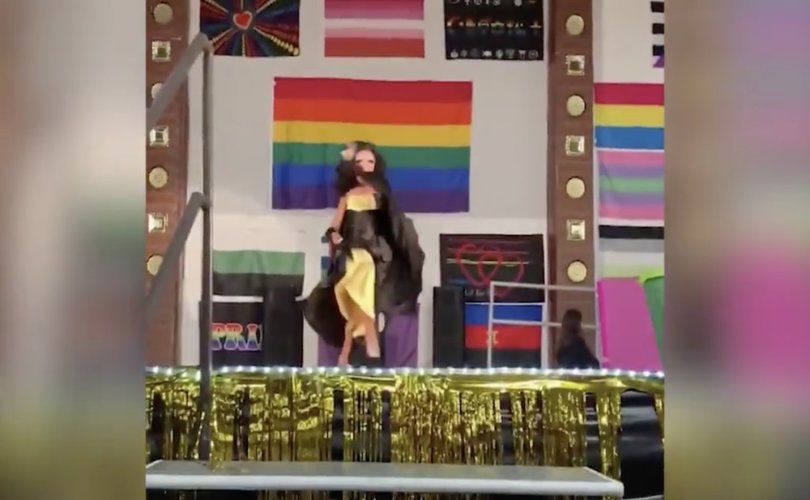 DENVER, June 9, 2020 (LifeSiteNews) – A Colorado mother is pushing back against criticism of her decision to allow her eight-year-old son to immerse himself in the world of drag, going so far as to claim exposing a child to the sexually-charged profession is therapeutic.

Mill Blackburn is a “nonbinary” (according to his parents) child who began performing in the Denver drag scene in August 2019 under the stage name “Salt Qween.” His mother, Manige Blackburn, claims the boy’s interest in drag began at age two, when seeing RuPaul’s Drag Race on TV inspired him to don a “pink fluffy dress” and declare “I’m a drag queen.”

As the years went on, Mill would wear both male and female clothes while playing dress-up, but his entry into “professional” drag came when his family attended an LGBT “pride” parade.

“We walked past a booth which offered kids the chance to drag up and perform on stage with a local drag house, and Mill was determined to get involved,” his father, Cameron Blackburn, recalled. “When Mill has their mind set on something, there's no changing it, so we let them get paired up with a drag artist who spent the next hour or so transforming them.”

The crowd enjoyed Mill’s subsequent stage performance, and he was invited to perform regularly.

Manige insists she is “not the driving force behind this,” but merely “let(s) my children pursue what interests them” until it “fizzles out — in this case it hasn't yet.”

Responding to objections that letting her son participate in drag is harmful to him, she claims that “drag is like protective armor. It protects children as they explore their gender. I honestly classify it as mental health care for Mill. The big purple wigs, the make-up and the new name — it's all so cathartic.”

She also denies that drag is “sexualized” on the grounds that “if someone is gay, they are going to be gay regardless of whether they dabbled in drag as a kid.” At the same time, however, she says her son recently told her, “I don't know if I'm a he, a she or a they,” and admits his gender confusion “never would have happened so organically without being part of Denver's drag scene.”

A body of social science literature indicates that indulging a child’s gender confusion can be harmful in the long run. In 2017, the University of Cambridge’s Stonewall report found that 96 percent of trans students in Scotland attempted self-harm through actions such as cutting themselves, and 40 percent attempted suicide. Forty percent in the United States have attempted suicide, as well, according to a 2016 survey from the National Center for Transgender Equality (NCTE). According to a 2011 study out of Sweden, trans people remain 19 times more likely to commit suicide than the general population, even after surgery to reconstruct their bodies.

Further, the world of drag is infamous for its heavy sexual content, as are the stories of other child drag stars such as Nemis Quinn Mélançon Golden (a.k.a. “Lactatia”) and Desmond Napoles (a.k.a. “Desmond is Amazing”). Another trend, Drag Queen Storytimes directed at children in public libraries, have been described by performers themselves as intended to give children “unabashedly queer role models” and facilitate “the grooming of the next generation.”