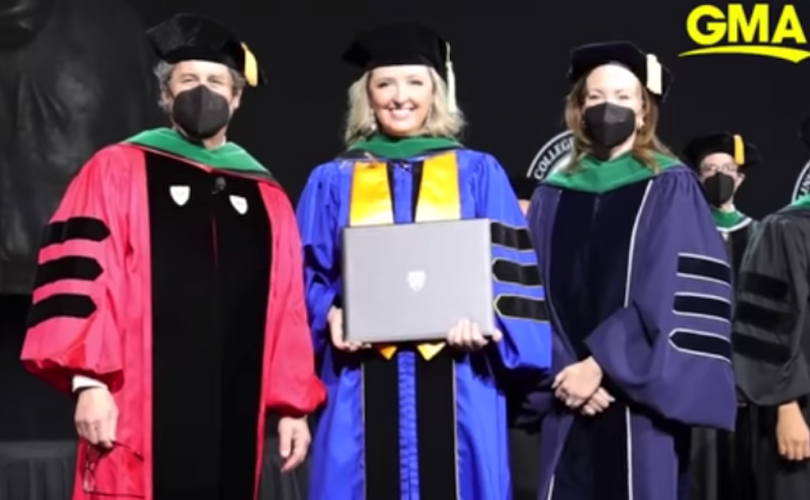 PHOENIX (LifeSiteNews) – Mother of nine Sarah Merrill challenged the claim that mothers cannot have successful careers by graduating from medical school and now plans to become a neurosurgeon.

This month, Merrill’s husband and nine children aged 8-20 accompanied her to her graduation from the Mayo Clinic Alix School of Medicine in Phoenix, Arizona, ABC News reported. She now plans to begin a neurosurgery residency at Indiana University.

“It’s going to be a new challenge, a new adventure,” Merrill told Good Morning America of her upcoming residency. “But everybody is on board, and I think we have a great support system.”

41-year-old Merrill began pursuing a medial career at the age of age 17 when she entered Dartmouth College as a pre-med major. It was there that she met her future husband.

The couple married and Merrill had a 5-month-old daughter at the time of her graduation from Dartmouth. Having taken the Medical College Admission Test (MCAT) while pregnant, Merrill originally planned to continue to medical school.

— Article continues below Petition —
PETITION CONGRESS: Stop the grooming & sexualization of children in schools
Show Petition Text
6950 have signed the petition.
Let's get to 7500!
Thank you for signing this petition!
Add your signature:
Show Petition Text

However, she decided to postpone her education and focus on being a stay-at-home mom. “We weren’t necessarily going for a large family, in particular, in our planning, but that is what we did,” she said. “We ended up having four daughters and five sons, and we had all nine of those kids in 12 years.”

When her youngest was two, Merrill decided to return to medical school. Her family moved from Pennsylvania to Arizona after she was accepted at the Mayo Clinic Alix School of Medicine.

“I was 34 and I decided to go back and start taking some more recent coursework and I had to retake the MCAT,” Merrill explained. “I remember studying for the MCAT when my two youngest were 2 and 3 years old and my 2-year-old would climb on me like a mountain while I was trying to take practice tests.”

“Before I even applied to medical school, we had a big family meeting and everybody got to voice their opinion about it and we explained to them what it would mean,” she added. “They all gave it a big vote of support at the time.”

Merrill’s family members provided strong support as her mother moved to Arizona to help and her husband worked remotely in Arizona.

READ: This mother’s heart was failing until her newborn baby was placed in her arms

“A lot of times my teenage daughters would say, ‘Hey, mom, let’s have a homework party.’ So that’s what we do for fun,” Merrill continued. “We’d have snacks and they’d be doing their homework and I’d be studying for medical school.”

“Waiting so long to do this, I think, made me appreciate it more and made me enjoy it more,” she added. “And once I got into my clinical rotations, I noticed that I had a lot of life experience that helped me connect with a lot of patients, especially on my pediatrics and OBGYN rotations.”

Merrill began the program as the only mother there, but by the time of her graduation, there were a total of three mothers in the class.

Dr. Michele Halyard, a radiation oncologist and dean of the Mayo Clinic Alix School of Medicine, commended Merrill saying, “Having a mother of nine going into medical school and making it work really speaks, I think, to tremendous support from her family, including her husband and her kids, and tremendous organizational skills.”

Merrill encouraged women to challenge the assumption that mothers cannot have careers, saying “Set the goals that are what you’re really passionate about, that you would love to do and want to do, and once you’ve set that goal, then it helps to think small.”

“If you know what your priorities are, focus on the next step and then you’ll get where you want to go,” she added.