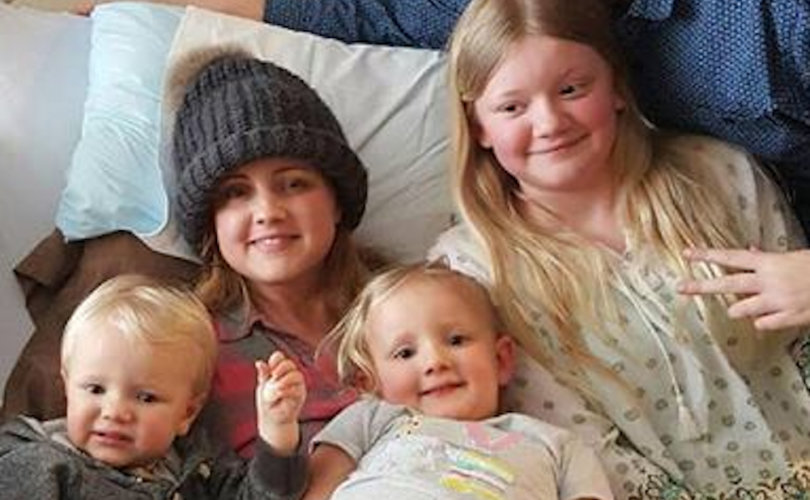 Carrie DeKlyen is joined by some of five children at the hospital.

ANN ARBOR, Michigan, August 11, 2017 (LifeSiteNews) – A terminally ill Michigan mom who is pregnant with her sixth child continues to cling to life while holding on to hope she’ll make it until her baby can be born.

Carrie DeKlyen and her husband Nick were given the option to abort their child to allow Carrie to remain in a clinical trial that might save her life. The couple said no.

“It was Carrie and Nick's decision and they chose to continue with trying to have the baby,” Carrie DeKlyen's sister-in-law, Sonya Nelson, said.

DeKlyen, 37, of Wyoming, Michigan, was diagnosed with Glioblastoma multiforme in April, MLive.com reported, and surgeons attempted twice to remove her brain tumor.

She was accepted into the clinical trial shortly thereafter, but two weeks later the family learned she was pregnant with a little girl.

Doctors at the University of Michigan in Ann Arbor said Carrie DeKlyen could continue to take part in the trial if she terminated her pregnancy.

“This trial, they said, would have prolonged her life, medically speaking, even longer,” Nelson said in a report from WoodTV.com. “But they chose to continue with the pregnancy. So this is where we are at today.”

DeKlyen suffered a stroke two weeks ago and remains unconscious in intensive care.

Glioblastoma multiforme is a highly malignant cancer because the cells reproduce quickly and are supported by a large network of blood vessels. Patients with the diagnosis have about a 15-month life expectancy.

The condition is the same that Brittany Maynard had. She was the 29-year-old woman committed suicide in 2014 in response to her diagnosis, campaigning for assisted suicide during her final weeks. Others chose life, went on to beat the odds and outlive their prognosis, and otherwise found meaning in their diagnosis.

The DeKlyen family’s goal is to keep Carrie alive at least for the next eight weeks, when she will be 28 weeks into her pregnancy and her daughter can be delivered.

But they still hold out hope she’ll be able to meet her child.

“We want her to wake up,” said Nelson.

“We would love for her to be able to see this gift that she gave,” she continued. “She gave this child the gift of life.”

The family says the baby is healthy, and a Facebook page is following their story.

While Nick DeKlyen stays with his wife at the hospital, their extended family and fellow members of Resurrection Life Church are assisting with their other children, ages 2 to 18.

Nelson said they have an amazing family, and she doesn’t know how families that don’t have the support get through something like this.

No matter what happens, they have hope.

“We are a family of faith,” Nelson said. “And so we are just believing that God’s plan for Carrie is to be healed. And if He chooses to heal her here or in heaven, we will still trust in Him.”

Nick DeKlyen hasn’t been able to work during this time, creating financial difficulty for the family, and a GoFundMe page has been established to assist with the loss of income.