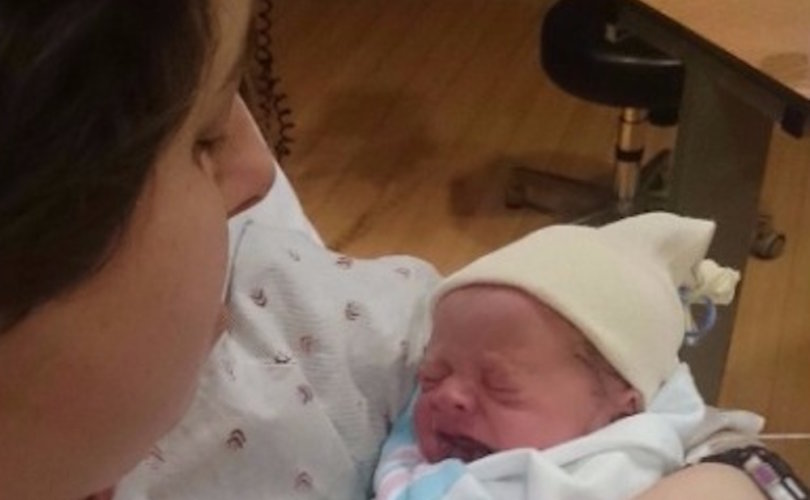 TONAWANDA, New York, April 20, 2016 (LifeSiteNews) — Kim Vaillancourt began having harsh headaches during the Christmas holidays.  Under usual circumstances, she would have just “toughed it out,” but because she was with child, Kim was concerned for her baby, and so she made a doctor appointment.

The doctor had devastating news.  Kim had Glioblastoma, an aggressive brain cancer.  She had developed two brain tumors: one on the right frontal lobe, the other on the base of the brain.  Kim, 20 weeks pregnant, was rushed to emergency surgery to remove the tumors.

Conventional wisdom was to abort the baby so Kim could undergo chemotherapy, radiation, the works, to save Kim's life.  But Kim was determined to save her baby as well.  Not only did she decide to give birth, she wanted to carry her baby as long as humanly possible, even though that meant risking her own life.

Kim delayed life-saving chemotherapy and radiation because, as local television station WGRZ put it, “her unborn child is her first priority.”

“I've got to give baby a chance,” the devoted mother of six explained.

After surgery and throughout her pregnancy, Kim underwent MRIs every two weeks to make sure no new tumors developed.

Despite the desperate diagnosis and the risk to her own life, Kim did not abort little Wyatt Eli, who was born one month premature on Friday, at 4 pounds, 7 ounces.

In fact, Kim and her husband Phil call little Wyatt Eli their “miracle baby” who saved Kim's life, because she would not have gone to the doctor for headaches except for the fact that she was pregnant with the precious little guy.

Their selflessness in giving Wyatt credit for saving Kim's life is actually true, according to Roswell Park Cancer Institute Neuro-Oncologist Dr. Ajay Abad.  Dr. Abad said Kim's brain tumors were growing so aggressively that she had weeks, if not just days, to live.

“We definitely feel that God put that baby in her for a reason… to save her life,” Phil said. “If it wasn't for the baby, she probably would've never gone to the hospital.”

Kim and Phil, who have been married 15 years, had two children, Ryan and Hailey, and then were given the opportunity to adopt three girls, Kamila, Josie and Chalie, from a troubled home.  One of the adopted girls, Josie, was born without any arms or legs.

The three girls were officially adopted on December 23, 2015, just days before Kim went to the doctor and found out her cancer diagnosis.

But even with the tumors gone, Kim's diagnosis remains grave.  Specialists say Glioblastoma always grows back, and will claim her life.  The life expectancy for a person with Kim's level of Glioblastoma, “Grade 4,” the highest and most serious degree of the cancer, is just over a year.

So Kim prays for peace.  “I don't want to leave Phil with six kids and one of them being super sick.  He's trying to take care of so many kids, so whatever I can do, I'm going to do it,” Kim told WGRZ.

“I'm in one of two places,” Kim explains.  “I either get to stay with Phil and the kids and live a long life. Or I get to go home and be with Jesus. I'm okay. Phil is the one that's stuck holding everything and trying to juggle all of this craziness.”

The Vaillancourts are believing in miracles but maintaining faith and trust in God, no matter what.  Phil is preparing for the possibility of becoming a single father, taking on Kim's domestic and nurturing role feeding their children, homeschooling, and making their house a home.  He is also taking care of his wife, besides his full-time job as senior maintenance worker for the local wastewater treatment plant.

“I've never seen anybody better. He has not left my side. He's helped me with stuff that men don't do,” said Kim. “He doesn't leave me.  He's with me all the time.”

Besides praying for peace, and for more time, Kim prays for her children to remember her for her love.  “Just that I love them. That's it,” she shares.  “I'd do anything for them. Any single one of them.”

Their family and their community is supporting them as well.  While the oldest Vaillancourt children, Ryan and Hailey, take on more chores, Kim's sister Jenna Koch and others are organizing fundraisers like Euchre tournaments to help the rising medical costs of both Wyatt Eli's intensive care and Kim's treatment.

This heroic couple asks for the prayers of prolifers everywhere.  A GoFundMe campaign has been set up to help them.