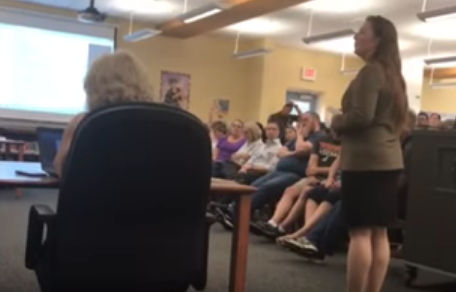 GRASS LAKE, Michigan, August 16, 2017 (LifeSiteNews) – A mother gave a concise defense of every child's right to privacy as she argued against allowing girls in boys' bathrooms and vice versa.

Grass Lake Public Schools is considering allowing elementary school students to use the bathrooms designated for the opposite sex.

“We wouldn’t be here if we didn't all care deeply about children,” the mom acknowledged, saying she appreciated how parents at the debate said they'd go into “burning buildings” for each other's kids. “But, just like in the classic book Animal Farm by George Orwell, where all animals are equal but some animals are more 'equal' than others, this rule is infringing on some students' right[s] – the right to dignity, the right to bodily privacy.”

She noted that genderless bathrooms will mean men of all ages can go in the girls' restroom and vice versa.

The mom urged the school district to “stand up for all children” because “all children deserve the right to bodily privacy.” Her remarks were met with applause.

One of the district's schools, George Long Elementary School, already lets a nine-year-old girl use the boys' bathroom. The girl, who thinks she is a boy, wasn't satisfied simply using a single stall, unisex bathroom.

Her mother, Terri Neely, said forcing her daughter to use a private bathroom rather than the boys' bathroom is telling her she's “not legitimate” and “not good enough to be treated like the other boys.”

Allowing Neely's daughter to use the boys' restroom made her “became comfortable in who he was and started being able to stand up for himself,” she said, using masculine pronouns to describe her daughter.