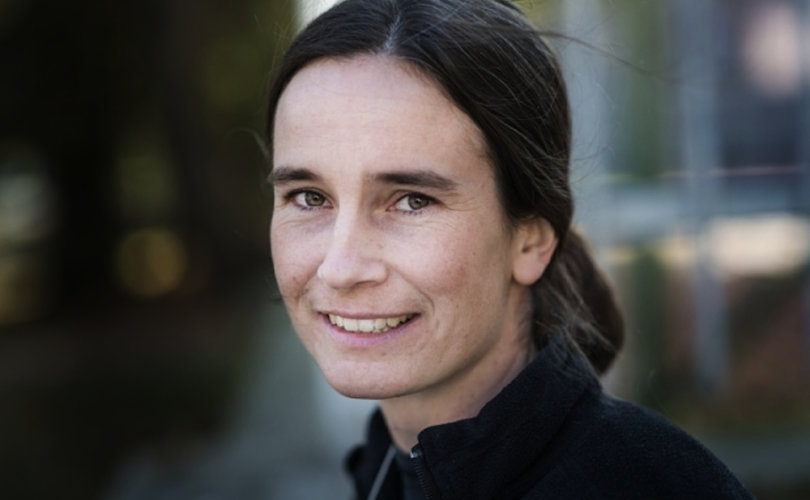 TORONTO, September 14, 2017 (LifeSiteNews) — A woman who was seven weeks’ pregnant decided to keep her baby after meeting Canadian pro-life activist Mary Wagner outside an abortion centre, a judge heard earlier this week in court.

“I met Mary Wagner December 12th on a day I was hopeless and helpless and about to end the life of an innocent unborn seven-weeks-old child,” the woman wrote.

“She encourage[d] me and gave me hope. I now have a eight-week-old baby that makes me happy and fulfill[ed] as a woman.”

Wagner introduced the mother’s letter as evidence at her Tuesday sentencing trial.

“I would not be here if it was not a matter of life or death,” she told Ontario Court of Justice Rick Libman.

The mother’s letter was a perfect illustration of why Wagner had gone to the abortion facility, she told the Court.

“If I had obeyed the law, that child would not be alive today,” Wagner said.

Wagner, 43, was arrested December 12, 2016, outside Bloor West Village Women’s Clinic, after staff forcibly removed her when she attempted to talk to women in the waiting room and give them alternatives to abortion.

Libman convicted Wagner on August 15 of mischief and breach of probation but deferred sentencing to September 12, telling Wagner she could solicit character references in her defence.

Wagner appealed to the pro-life community to send the judge letters defending the right to life of the unborn child.

Indeed, Libman received some 850 letters, 34,000 emails and 67,000 petition signatures in support of Wagner, according to Campaign Life Coalition, where most letters were initially delivered.

They came from pro-lifers in Canada, Poland, Japan, the UK, United States, Germany, and the Netherlands.

In stark contrast to the letter Wagner read to the court, some missives were poignant endorsements of Wagner from women grieving their abortions.

“I wish I had a Mary Wagner with me in that waiting room,” wrote a woman from Canada who had an abortion at age 18.

“I know one thing, if I had met a person like Mary Wagner when it was about to happen, my life would have been different,” wrote a 45-year-old woman from the UK who had three abortions before giving birth to a daughter.

“I hated myself for what I had done,” she added.

“I would like to ask you to consider the fact that women who make that decision are not always convinced if this is the right way to go,” she wrote.

“Let them meet Mary Wagner on their path so that they could rethink their decision.”

As for the mother who did meet Wagner the day of her arrest, Wagner said some friends had come along with her “to offer their prayer support and practical support if there was any woman who wanted to take them up on the offer.”

These friends “offered [the mother] a ride to her class and in conversations driving to her class they told her about the Sisters of Life and asked if she would like them to call,” Wagner told LifeSiteNews.

“I know the Sisters of Life were contacted and they agreed to meet [the mother] that afternoon … after her class.”

Indeed, the friends drove one of the Sisters of Life to the college to meet the mother that afternoon.

“They met her, established a friendship with her, a connection, just a real show of support and they’ve been accompanying her ever since then,” Wagner said.

The mother, who has since married the baby’s father, added a postscript to her letter, which Wagner read to the court: “I thought the baby would be a girl because I wanted to name [her] after Mary. I was so disappointed when I had the ultrasound and found out it was baby boy.”

She also sent Wagner an email the day of the sentencing: “Mary, we’re thinking of you and praying for you today. You are in your prayers, we wish you all the best.”

The Crown had asked Libman to sentence Wagner to 18 months in jail.

But the judge ruled “society would not be served” if Wagner spent more time in jail than the almost six months she’d already served awaiting trial.

He sentenced her to 30 months’ probation, which included a condition she stay 250 meters away from the Bloor West Village Women’s Clinic, and 50 hours of community service.

Wagner remains under a previous probation order until April 2019, and has served five years in jail for her attempts to save women and children from the violence of abortion.

“I don’t think I could continue this path, and I don’t know if I would have even begun it, without the gift of faith and the grace that God — many graces, grace upon grace — that He has given me,” Wagner, a Catholic, told LifeSiteNews.

“And the conviction through the Scripture, as well, that Jesus said ‘Whatever you do to one of the least of my brothers, you this you do to me,’ and the importance of living that out concretely,” she added.

“Not just in an abstract way, but concretely, because these are real children and mothers who are every day in danger.”