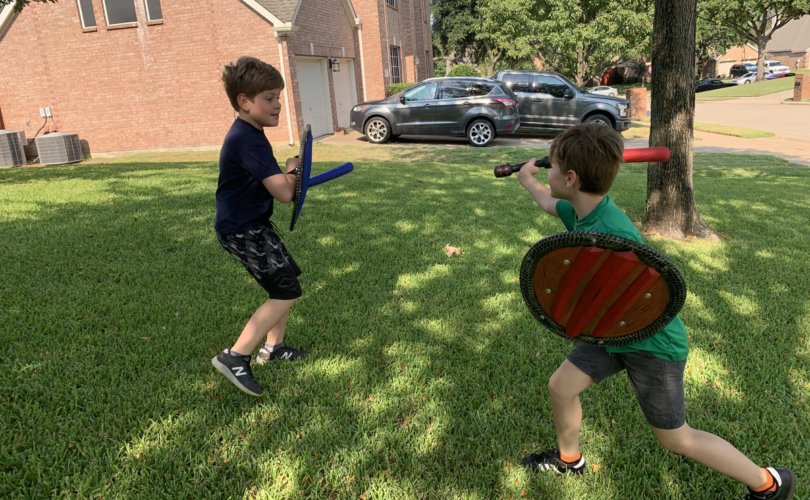 TEXAS, October 18, 2019 (LifeSiteNews) – The mother who is trying to “transition” her seven-year-old son to a girl testified today that she began to believe her child was different when he preferred a McDonald’s girl toy to a boy toy.

Jefferey Younger and Dr. Anne Georgulas are in a custody and conservatorship battle over their twin sons, James and Jude. James presents as a girl called “Luna” at his mother’s home and as a boy with his father. Georgulas has enrolled James in school as a girl since kindergarten. Mr. Younger alleges Dr. Georgulas is forcing James to present as a girl. He is worried about James undergoing chemical castration or a full medical “transition.”

Today was meant to be the final day of the trial, which is being heard by a jury, the trial was recessed before noon and will resume Monday morning. The judge ruled the trial must end by Monday at 2:00 p.m.

A variety of expert witnesses from both sides have testified.

Dr. Georgulas testified this morning. She reiterated her desire to keep the media out of the case, allegedly in order to protect the privacy of her boys. Earlier in the week, the custody evaluator mentioned what he said was significant harm done to Georgulas’ pediatric practice because of the case’s publicity.

Additionally, Georgulas told the jury about the events leading up to James’ presentation as “Luna.”

She told the jury that she first started to think something may be different with James when he selected a girl’s toy at McDonalds.

“So the very first thing I saw was in the summer of 2015 when she [James] picked a McDonald’s girls’ toy instead of a boys’ toy.”

Dr. Georgulas then recounted a story of taking James to get a crown at Target. James told his mom an Elsa dress, from the popular Frozen franchise, “was such a pretty dress.”

“I asked him, ‘Do you want the dress?’ and she [sic] replied, ‘Yes!’” Dr. Georgulas said, so she purchased the dress for James and allowed him to wear it at home.

According to Dr. Georgulas’ testimony, James then asked insistently for a dress on two occasions. The third time James asked for a dress, Dr. Georgulas alleges that he said, “I want that dress and I don’t want it to be pretend.”

Dr. Georgulas also showed photos of James in a dress at her father’s house to show that James was comfortable presenting as a girl with his father. Mr. Younger testified to the same fact the previous day. Dr. Georgulas believes James presents as a boy at his father’s home now due to his father’s lack of acceptance of James as “Luna.” Mr. Younger shared with the court that at one point James threw away the girls clothes James had at Mr. Younger’s home.

Dr. Georgulas stated that the fact that “Mr. Younger surrounds himself with people like that [who do not affirm ‘Luna’s gender’]” is concerning.

Mr. Odeneal, Mr. Younger lawyer reviewed Dr. Georgulas’ previous deposition with her while she was on the stand.

According to Dr. Georgulas’ deposition, when asked about starting James on puberty blockers she responded, “That is the recommendation. That what GENECIS suggest, that’s what she’s [James] talking about, but that would only be if she persists.”

The trial continues on Monday.