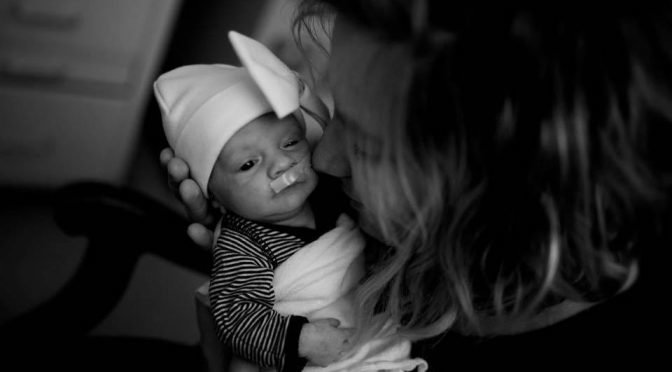 May 24, 2016 (LiveActionNews) — Purely by accident, Ashley Costanzo started a viral trend on social media. It all started with a desire to share a little bit of her daughter Everly’s story with the world. Everly is Ashley’s third child, and she was born at 31 weeks in an unexpected turn of events.

When Ashley posted a photo of Everly on Facebook, passionately objecting to Hillary Clinton’s and Bernie Sander’s support of late-term abortion, other parents of preemies latched on and spread the word, substituting the photo of Everly with photos of their own children.

Many stories of bravery and courage lie behind the preemie photos that spread like wildfire. But the story that started it all is the story of Ashley and Everly.

In a February blog post, Ashley shares that her pregnancy with Everly suddenly changed in her third trimester.

30 weeks pregnant; I guess this is where I will start. I was sick for a while at this point but I just kept mommy-ing on. I was tired, nauseas, swollen, hurting, and weary. I had nothing negative but low iron show up on my bloodwork up to this point, so I started weekly NSTS and ultrasounds just to check in on Everly and make sure she was growing okay. …

I took pictures the Sunday before I had her of a sweet family even though the previous 24 hours and even on the way to the park I had been vomiting non stop. I assumed it was just from the iron supplement I had taken the night before, but now looking back, I feel like this is when it all started.

The next day, Ashley went in for an ultrasound, where the tech believed everything looked normal. Although Everly was measuring on the smaller side, the tech reassured Ashley, checked some vital signs, and sent her home. Two days later, however, Ashley woke up feeling “light-headed and just ‘not right.'” She also believed her arm was swollen, and her doctor’s office advised her to go to the ER.

At the ER, things started getting even stranger. At first, Ashley’s blood pressure read normal, but the protein levels in her urine were too high. Then, while hooked up to the monitors, her blood pressure began to hop around and change every minute or so. The second urine test revealed protein levels of 425, and, as Ashley says, “anything over 300 is…when they start monitoring you for pre eclampsia.” She spent the night in the hospital, where things continued to go downhill:

After a night in the triage, the next day, my Dr came to visit me and tell me that my numbers had gone from 425 to 1500 overnight. Still, he didn’t seem too concerned and just wanted to see me the next day to go over our plan for the rest of the pregnancy. They also gave me steroid shots (I was scared to death) just in case I did have an early baby.

After this frightening episode, Ashley went back home, and the plan was to have weekly appointments with extra checks on her and Everly. While the doctor believed everything would be fine, it was not. Later that week, things escalated within a matter of minutes while Ashley was watching an Avengers movie with her husband:

My stomach really started hurting at that point, so I went to the restroom thinking it was just bowel pains and that it would pass. About 10 minutes later I started shaking. It wasn’t passing. It was getting worse. I walked back out to lay down on the couch to try to rest it off, but nothing was working. I walked back into the bathroom and that’s when it hit me. Something was wrong, something was VERY wrong. I walked into the hallway, dropped to my knees and told Josh he needed to call the Dr., my parents, and an ambulance because I was “dying”. At the time maybe that sounded dramatic, but that is how I felt. I was literally dying – I was light headed, pale as a ghost, and dripping in sweat. I couldn’t even get up at this point so there I was, in a robe and my underwear, waiting for my parents to come, listening to Josh on the phone with 911. I couldn’t handle it and I didn’t even care. …

When we got to the hospital, they hooked me on to a bunch of monitors to see what was going on. Nothing was showing up besides them having a harder time with finding the best way to monitor Everly. My Dr. for some reason happened to already be at the hospital at the time Josh called him, I truly believe that everything DOES happen for some reason…of all the times for him to already be there, that night, he just happened to be.

After an hour or so of trying to figure out what was wrong, he checked to see if I happened to be dilated since I mentioned the abdominal pain was like one big contraction that just NEVER went away. He checked me and walked out of the room and then walked back in a few minutes later. He said “I didn’t like how she didn’t react at all when I pushed on her, and some of her heart rate readings aren’t adding up, so we are going to go ahead and deliver you”.

They still didn’t know what was wrong- but they knew something WAS wrong…WHAT?! I’m only 31 weeks 4 days at this point.

After Everly had finally been delivered, Ashley wasn’t able to see or hold her yet, which was very different from the births of her first two children:

I remember whispering to Josh “Is she here?” and him saying, “yes, she’s been here, 4:06 am was her time of birth”. I told him to go over to her and see her. She was surrounded by people, taking care of her. At first she wasn’t responding to breathing treatments, but with a little time they got her to a stable point and were going to head upstairs with her. She was 3 lbs 2 oz, 16 inches long. They stopped on the way up stairs so I could peak at her, and all I remember was hearing this sweet coo from her, Josh actually taped it for me, I will never forget it. As they wheeled her up we got back to finishing up with me. I think at this point I may have finally passed out, the surgery in all took 3.5-4 hours for them to get me together.

Ashley, still in major recovery herself, thought that her newest baby looked like “an angel. So tiny, but so perfect!” During her hospital stay, the doctor told Josh, Ashley’s husband, how both she and Everly had almost died:

I had had a 75% placental abruption, which meant the baby was only getting 25% of what she needed to survive, I had a massive blood clot, and DIC. Later on we also found out that I had a severe infection in my uterus, that by the grace of God, didn’t leak out into me, or affect Everly. The Dr also told Josh my iron levels were still low, but stable at that point. My kidney numbers were on the rise, which wasn’t a great thing, it was a sign of some kidney damage from the loss of blood. I remember hearing him say “a few more hours and the baby would not have been here, and if Ashley had just gone back to bed, she may have not been here either.” WOW.

For over a month, Everly had to stay in the NICU, where Ashley and Josh watched her grow into an even more beautiful baby day by day:

Every little ounce was a victory for us. We watched her physically grow eye lashes, nails grow longer, hair come and go, and finish developing into the little girl she is today. … Everly is now a BEAUTIFUL almost 4 months old (1 month and 3 weeks adjusted, in the preemie world) weighing 10 lbs and in some 0-3 months (mostly sleepers) and newborn outfits. She is finally to a size 1 diaper and her brother and sister love her to pieces. She is seriously the happiest baby who just learned to smile and so content with the world around her, she fits perfectly in our family – we can’t wait for her to continue to develop and see who she becomes.

Ashley closes her story, not with fear, but with anticipation and encouragement for what lies ahead for every other pregnant mother. Despite her harrowing, near-death experience, Ashley is certain that every child is a gift of life – one that deserves to be lived in full, and not cut short by choice:

I do ask, please mommy’s to be, the days are long, but the years are short…months of pregnancy is so exhausting, uncomfortable, and just plain HARD. Those kicks are bruising and endless at times, but I promise you it is worth it. I know its not easy, but from a mom who didn’t get to experience that with her third, I wish I was you right now- hanging in there until the last days of pregnancy and anticipating a normal birth, like I did with my other two. Count your blessings, and be humble because you are BLESSED to be doing what you are, growing a perfect little baby.

Mother’s day took on a whole new meaning when I became one in 2012. Even though I spend every day, thanks to the Grace of God, caring and loving on my three little babies, its amazing how one day can make you stop and appreciate. You don’t just appreciate your mother and the strong mothers you surround yourself with, you appreciate the little ones who MAKE you a mother. Without them surely our houses would be cleaner, and our hearts much emptier. … [E]ven on my bad days, I am always enough for them.

Editor’s Note: All photos are used with permission from Ashley. You can read Ashley and Everly’s entire story here.