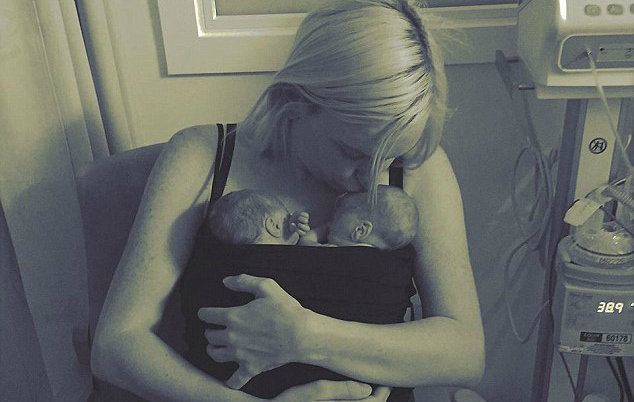 Manchester, England, November 12, 2015 (LifeSiteNews) – A young cancer-stricken mother who refused to abort after receiving her pre-natal diagnosis has given birth to healthy twins.

Doctor’s identified Holley Tierney’s Non-Hodgkin’s Lymphoma when the Manchester, England, mom was 23 weeks pregnant. They advised her to abort and begin chemotherapy.

But at this point in her pregnancy the 25-year-old mom was able to feel the babies kick inside her womb, and even though facing cancer while pregnant was her worst nightmare, she said she simply couldn’t deny her unborn children life.

“I knew there was no way I could terminate my pregnancy when I felt them kick, my maternal instincts had already kicked in,” Tierney said. “It was the happiest day of my life when my babies were delivered safely, it was definitely a risk worth taking, all I cared about was their health.”

Tierney was resolute in postponing the drugs until after her babies were born, according to a Daily Mail report.

“Once doctors realized I wasn't having a termination they kept pushing for them to be born premature but I wanted my twins to reach 30-weeks before I had a caesarean,” she said.

However, at 29 weeks doctors told her she shouldn't wait any longer because the cancer could spread, resulting in Tierney’s son Harlow and daughter Havana arriving via C-section 11 weeks early.

“My babies were delivered safely in August and taken straight to intensive care, they weighed almost 3lbs each,” Tierney recounted. “Seeing them for the first time was the best feeling in the world, I couldn't believe they were mine.”

When the twins were a week old she started chemotherapy, encountering its accompanying side effects, including nausea and losing her hair. And at the same time as her babies were embarking on an 11-week hospital stay, and she began her cancer fight, Tierney had to ponder the possibility of her children growing up without their mother.

“It was bittersweet as I kept thinking I would never have chance to watch them grow up,” she said.

The twins recently made it home and are settling in, and after five cycles of chemotherapy Tierney has just one left before starting radiotherapy after the New Year.

Before her initial diagnosis, Doctors had thought her chest and arm pain were due to a pulled muscle. So as she moves forward with motherhood and her cancer battle, Tierney is also speaking out about her situation in hopes that other pregnant moms will be aware of potential problem symptoms.

“It was heart breaking but I knew I needed to stay strong and positive for my babies,” said Tierney. “They had fought to stay alive and now I needed to fight for my life and that's exactly what I'm doing.”