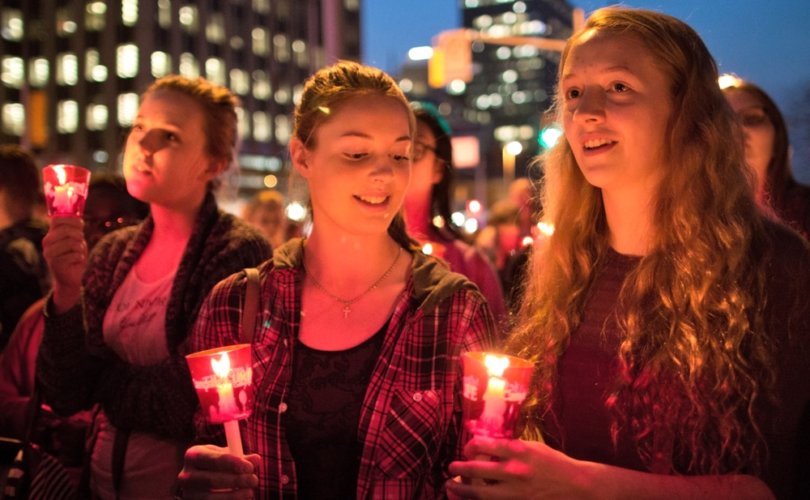 Candlelight vigil for victims of abortion in Ottawa.Campaign Life Coalition

OTTAWA, Ontario, May 17, 2018 (LifeSiteNews) – Patti Harrison wanted her testimony at the Canadian March for Life to touch at least one person’s life, but, it actually saved a life.

Harrison was one of the speakers at the May 9 candlelight vigil the night before the march in Ottawa. She told the crowd how her unintended children, despite being born during harrowing circumstances, have been unqualified blessings to herself and the world around them.

Harrison explained that in 1995, she was a fifteen-year-old struggling with mental illness and a tumultuous relationship with her parents. She left home and eventually found herself “in a crack house where she witnesse[d] something she should’ve never seen,” leading her to be imprisoned in the basement, starved, beaten, gang-raped, and forced to work as a drug mule.

She was eventually rescued, but learned she was pregnant while being treated after a suicide attempt. Her son is now a 22-year-old man named Austin. But, at the time, Harrison’s father threatened to disown her if she didn’t get an abortion, largely because her rapist had impregnated her with a dark-skinned baby. She and Austin eventually moved to Windsor, Ontario to start fresh, thanks to the help of pro-life volunteers.

“If it wasn’t for the Rose Of Durham, which is a pregnancy shelter for women who don’t have any family support, I wouldn’t have been able to make it with him to get to Windsor,” Harrison said. “So those kinds of organizations and support groups are so important for our communities. If you can find one, embrace it.”

Harrison also revealed that the “doctors that we’re supposed to trust” instead attempted to pressure her to “just have an abortion” because “you’ve got your whole life ahead of you” whereas Austin was “not going to have any kind of life.”

She went on to reveal that her second child, a daughter, was conceived after she “passed out with some friends” during a period where she “had a drinking problem.” But despite being in another terrifying situation where she was pregnant without any recollection of having sex, she chose life again, and says today she wouldn’t trade any of her kids for anything.

Harrison closed her remarks with some advice for girls and women in similar situations, who fear abortion is their only escape. “If you can think for one second” that the baby is “my family…my flesh and blood” rather than “my rapist’s baby” or “an unplanned family member’s baby,” she promised, then “you will be able to get past all of that, all of the depression, all of the bad feelings, all of the bad thoughts,” and “be able to love your child unconditionally.”

“Thank you so much for listening to me,” Harrison concluded, “and I hope I’ve touched just one life with my story.”

The day after the march, a chance encounter in a hotel lobby revealed that she succeeded.

Harrison told LifeSiteNews that she crossed paths with a group of girls while preparing to leave, who told her they were in town for the same event. The girls told her their favorite part was the candlelight vigil’s first speech, not realizing they were talking to the woman who delivered it.

“They had come with a friend who was pregnant after a sexual assault, and she was going to have an abortion,” Harrison explained. “After hearing that speaker she changed her mind.”

Harrison introduced herself, sparking tears of emotion from the whole group. The pregnant friend wasn’t present, and preferred to remain anonymous, but Harrison passed along contact information for a shelter for pregnant teens in her area.

“God needed me to share my story,” Harrison said. “I’m just so glad my story inspired her to choose life.”