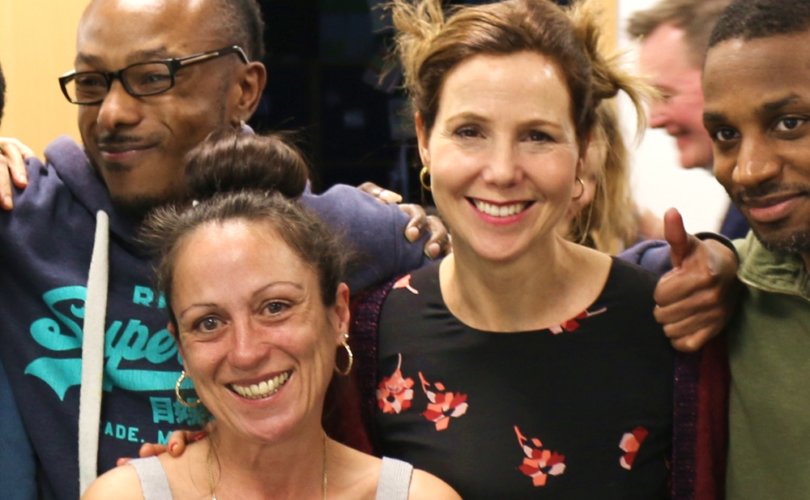 February 27, 2018 (LifeSiteNews) – British TV and comedy actress Sally Phillips — of Bridget Jones fame — was left stunned after listening to the story of a mother finding out she was pregnant with twins, and given just 15 minutes to decide if she wanted to abort the twin suspected of having Down syndrome.

Phillips heard the women’s story while on a February 19 visit to the University of East London (UEL) for a special Q&A session with students, followed by a tour of the University’s Rix Research and Media Centre, named after the late Lord Brian Rix, UEL’s first chancellor, which specialises in media and communication technology for people with learning disabilities.

The mother, Claire Watts, revealed, “I was 38 at the time, and went for my scan and the doctors told me I was having twins, which was a complete surprise. A bit later I went for another scan and that’s when a doctor told me one of the twins had unusual nuchal fluid, which can indicate Down syndrome.”

A nuchal scan is done between 11-14 weeks into the pregnancy, and measures fluid at the back of a child’s neck. An increased amount of fluid can indicate a chromosomal condition such as Down.

“Then the doctor asked me on the spot if I wanted to have a termination, all the while there were a group of medical students standing there observing everything as part of their training,” she said.

“I couldn’t believe it, I had 15 minutes left of my appointment to make a decision like that, and then he asked if I wanted another screening test which looks at the fluid in the womb, to confirm if one of the kids had Down,” she added.

Surprisingly, the child with the irregular nuchal fluid, Alice, now 12, did not have Down, but the other twin did.

“There was no way I was going to abort any of my children, despite the pessimism of doctors. Alfie is a wonderful boy, and the bond between him and his twin sister is amazing, but I’ve had to fight every step of the way,” said the mother.

Echoing the experiences of mum Claire, Sally said, “12 years ago I gave birth to my son, Olly and doctors told me the ‘bad news’ as it’s always portrayed, that he had Down’s.”

“There were some readjustments to make, but it has been a joy in ways you wouldn’t expect, Olly is so relational and funny and enriches the lives of his brothers and friends,” she added.

In November 2017 Sally received an honorary doctorate from UEL, in recognition of her advocacy on behalf of people with Down syndrome, particularly her BBC documentary ‘A World Without Down’s’, which looked at the new Non-Invasive Pre-Natal Test (NIPT) for Down syndrome, to be rolled-out across the NHS this year.

She said, “These screening tests have become ‘screening-out’ techniques to get rid of people with Down’s, what sort of society is that creating, don’t we want to be inclusive?”

Mum Claire and Alfie are supporters of the Rix Centre, where Alfie has learned to build his own wiki – a personalised website with videos, photos, and audio, which helps people with learning disabilities communicate, learn, and share their lives and interests in an interactive way.

“Alfie loves his wiki, it has brought his life alive to others, and it’s the only bit of technology his 80-year-old granddad has any interest in.”

Rix Centre wikis are now used by around eight thousand individuals and Local Authorities across the country.

Sally’s Q&A session was attended by Shabir Randeree CBE, UEL’s chancellor, over 100 students and staff, and was chaired by Professor Andy Minnion, director of the Rix Centre, who guided the audience through the many highlights of Sally’s comedy acting career, included I’m Alan Partridge, Bridget Jones, Miranda, and Veep.

“Making Veep was the most fun I’ve had, and the documentary about Down’s is most important to me, it has really made an impact and changed the debate,” concluded Sally.