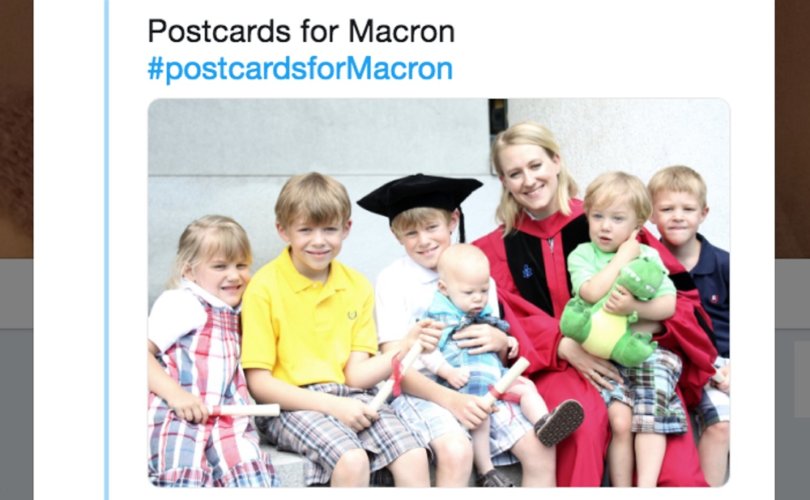 WASHINGTON, D.C., October 17, 2018 (LifeSiteNews) – Proud, smart moms with big families are fighting back on social media against France's president for suggesting it was impossible to find a woman who was “perfectly educated” and who had “seven, eight, nine children.”

Macron made the derogatory comment about African women having big families at a Goalkeepers event in the shadow of the United Nations in New York last month.  Goalkeepers is an event hosted by tech giant Bill Gates and his wife Melinda's pro-abortion and pro-contraception Gates Foundation.

“One of the critical issues we have regarding the African demography is the fact that this is not a chosen fertility,” said Macron. “I always say, 'Please, present me the lady who decided, being perfectly educated, to have seven, eight, nine children.”

The French president's insinuation that a lack of education is what is fueling big families has offended many mothers with big families, many of whom are very well-educated.

But, if Macron wanted examples of educated women with big families, he's certainly getting that now.

On Twitter, women from throughout the world are setting the French president straight by posting photographs of themselves and their large families – and noting their educational achievements.

She earned her doctorate in economics at Harvard University and is now an assistant professor at The Busch School of Business and Economics and a faculty fellow at the Institute for Human Ecology at The Catholic University of America.

On the Twitter thread she started, #postcardsforMacron, Pakaluk posted a photograph of herself and six of her children.

She followed up that tweet stating: “Eight children by choice.”

She's also urged other women with big families to post pics of themselves with their kids on that thread.

And it's catching on.

Already on Wednesday, more than 1,000 people had “liked” Pakaluk's tweet and 304 people had re-tweeted it. Many women – and their husbands – are also answering the call with photographs of their big families and educational credentials.

Stanford graduate Beth Hockel is both a mother of 11 and an electrical engineer. Hector Mauricio Peña showed off his six children and their mother who, incidentally, has a doctoral degree.

Josh Canning tweeted: “#DearEmmanuelMacron check out my educated and inspiring wife and mom of 7. #postcardsforMacron.”

“Robbbbbb” posted a photograph of his five young children and noted “My wife has a PhD in music and was once a college professor. This is her best work.”

Sue Anne Smith, who has both a degree in pharmacology and a master of business administration, is the proud “mom of seven.” University of Dallas grad Kristina Joyce Cyr, chairwoman of the Republican Central Committee for the City of St Louis, was also happy to tell the French president she has seven children.

Elizabeth Foss tweeted about her nine children: “Yes, they’re all mine. And so is my UVa degree. #postcardsforMacron.”

Yes, they’re all mine. And so is my UVa degree. #postcardsforMacron pic.twitter.com/dROzkKq1md

Despite the growing number of very well-educated women with fancy degrees stepping forth to proudly show off their families, though, Pakaluk wants to be clear that this is not just about either fancy degrees or large families.

“This is about … debunking the notion that high-fertility is a consequence of ignorance,” she tweeted.

It's important to Pakaluk that people realize that high fertility is in no way an obstacle to economic growth.

French President slams African women with large families, calls for them to be ‘properly educated’

At the United Nations, contraception is the answer to every problem