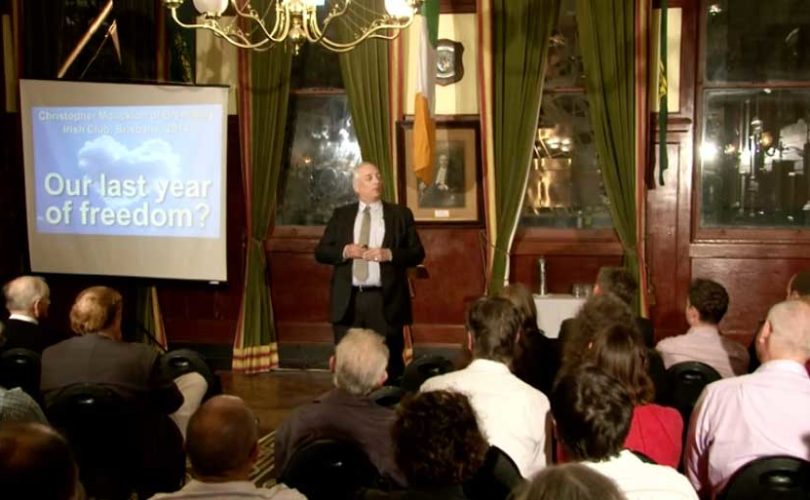 BRISBANE, Australia, October 18, 2015 (LifeSiteNews) – According to Lord Christopher Monckton, a former policy adviser to British Prime Minister Margaret Thatcher, Monday's Canadian election will decide if Prime Minister Stephen Harper, whom he calls the last man standing against the establishment of a 'one world government', will remain against a deliberate international effort to remove him. The second last, Australia's Prime Minister Tony Abbott, was overthrown, as predicted by Monckton in 2014, in order to clear the way for this international scheme.

With Harper out of the way, warned Monckton, world governance will finally begin with a successful December, 2015 Paris Climate Conference. Another major factor for the Climate treaty’s likely success this time, after many past failures, is the unprecedented, strong public support of the Roman Catholic Church under Pope Francis.

The Harper Conservative government has consistently opposed these binding international agreements that impose dramatic limits on the sovereignty of nations in order to resolve still-much-disputed, environmentalist claims of dangerous man-induced climate change.

Organizers of the Paris summit are proclaiming that “for the first time in over 20 years of UN negotiations,” they “aim to achieve a legally binding and universal agreement on climate.” At risk, according to Monckton and many other critics of the “fraudulent” climate change movement, is democracy, its associated freedoms, and the Christian way of life worldwide.

In September 2014, Monckton spoke in Brisbane, detailing his claims of the fraud behind the global warming 'science'. Monckton exposed what he says are the true intentions of what has been presented to the world as a noble environmentalist cause that demands urgent action.

This concealed push for a one-world government began at the Copenhagen Climate Change Conference in 2009, with a treaty draft containing “The scheme for the new institutional arrangement under the Convention will be based on three basic pillars: government; facilitative mechanism; and financial mechanism …” (UNFCCC draft of the Copenhagen Treaty, Annex 1, Para. 38, 15 September 2009)  (emphasis added)  It was blocked by China.  The Copenhagen conference also included an emphasis on population control as the final solution.

Monckton recounted a conversation when Sir David King, William Hague's United Kingdom “climate change ambassador” was asked by the Environmentalist Committee of the House of Commons in May 2014 “whether all the nations of the world were in principle ready to sign their peoples rights away in such a treaty,” to which he replied “Oh yes, but there are two stand-outs.  One is Canada, but don't worry about Canada.  They've got an election in the spring of 2015 and we and the U.N. will make sure that the present government is removed.”  Monckton recalled his absolute bluntness about the matter.

The other holdout was Australia which was in an arguably stronger position as there was no election until after the 2015 Paris Climate Change Conference.  With Tony Abbott as leader there was no chance that Australia would be signing the treaty.  In 2014, Abbott had taken the unusual step of sending an additional minister to accompany foreign minister Julie Bishop to ensure that she did not vote for the treaty at the 2014 Climate Change Conference in Lima.

Monckton warned of the need to protect Abbott and the danger from the Turnbull faction, in conjunction with the United Nations, doing their best to remove him ahead of this year’s Climate Change Conference.

In February this year, barely five months after Monckton's warning, Abbott survived a first attempt on his leadership from the Turnbull faction.  However, incessant negative and biased media coverage influenced the perception of Abbott by the Australian population, and hence depressed his polling figures. Consequently, a substantial number of government MPs became anxious with an election less than a year away.  In September, as reported by LifeSiteNews, Abbott was replaced by Turnbull 54-44 in a leadership spill ballot.

The outcome of the Canadian election remains to be seen, but the aim of any behind the scenes involvement by the UN and other climate extremists would be to effect a change of government so that Canada's vote at the December climate conference will be changed.

Monckton has urged people to write to their MPs and ask them to ensure that any treaty draft or treaty that is signed has a clause added that enables a country “when it eventually comes off the Kool-aid and wakes up” to withdraw at a later date after giving sufficient notice.  He provided a previously used example from Article 27 if the Kyoto protocol which Canada itself has used to withdraw from that treaty.

“At any time after three years from the date on which this Protocol has entered into force for a Party, that Party may withdraw from this Protocol by giving written notification to the Depositary.”

By default, the 2015 Paris treaty agreement will not have this.  According to Monckton, we need to “make sure that the nations of the world are not locked into something which in due course they would very nearly all bitterly regret.”

See Sept. 18, 2015 full explanation by Lord Monckton about this issue via a Skype interview.

Mr. Monckton was Special Advisor to Margaret Thatcher as U.K. Prime Minister from 1982 to 1986.  In 1986 he was among the first to advise the prime minister that “global warming” caused by carbon dioxide should be investigated. Two years later she set up the Hadley Centre for Forecasting: but she, like him, later changed her view. On leaving 10 Downing Street, he established a successful specialist consultancy company, giving technical advice to corporations and governments. His two articles on global warming in The Sunday Telegraph in November 2006 crashed its website after attracting 127,000 hits within two hours of publication.

A speech by Mr. Monckton to 1,000 citizens of St. Paul, Minnesota in October 2009, in which he drew public attention to a then little-known draft plan by the U.N. to establish an unelected world government at the (now-failed) climate summit at Copenhagen in December 2009, received 1,000,000 YouTube hits in a week – thought to be the fastest-ever YouTube platinum for a political speech. Some five million have now seen the presentation on various websites.

Mulcair: ‘Stephen Harper thinks keeping moms at home will help families. Not me.’

Abortion is Justin Trudeau’s ‘real priority’ for the election: commentator