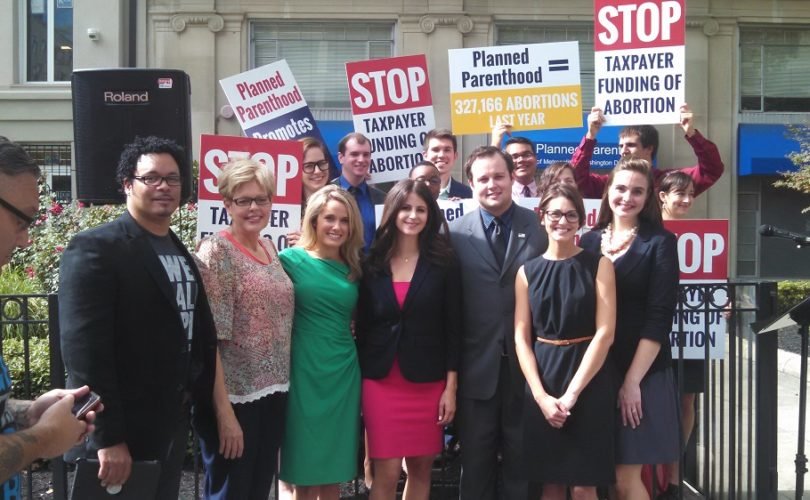 “All eyes should be on Planned Parenthood – a killer of over 300,000 children every year, and an entity pushing a disturbing, BDSM-promoting sexual agenda on our nation's kids.”

That was the message of investigative pro-life organization Live Action earlier today when when its president, Lila Rose, gathered six other leading pro-life voices in a press conference outside the Planned Parenthood on 16th Street — the office closest to the White House — to criticize the organization's destruction of the unborn.

“We want to make sure that Americans understand that this abortion corporation, already in hot water for corrupt practices that hurt women and young girls and for pushing a dangerous sexual agenda on teens, is being bankrolled by our tax dollars,” Rose said.

Government indifference to the fraud came as no surprise to the speakers.

“Remember, [Barack Obama] is the same president who voted four times against a bill that protected abortion survivors from infanticide, and was willing to shut down the government to protect Planned Parenthood's public funding,” said Jill Stanek, a prominent pro-life blogger who spoke at today's conference. “In addition to killing the unborn, Planned Parenthood has broken laws related to sex trafficking and statutory rape. It is also being sued for Medicaid fraud. It has also violated FDA protocols with regards to administrating RU-486 chemical abortions, which has led to the deaths of at least eight women.”

“We must end this threat to America's pre-born children and their mothers and certainly stop funding it through state and federal tax dollars,” Stanek concluded.

Planned Parenthood receives hundreds of millions of dollars of taxpayer funds each year, and has received more money to help Americans navigate the Affordable Care Act.

Stanek told LifeSiteNews, “As a board member of Live Action, I was proud to join them in their fight for life near the most pro-abortion White House in American history.”

A spokesperson for Live Action told LifeSiteNews that during the press conference one man approached the microphone and shouted that pro-life advocates should leave women alone. The spokesperson said that several supporters of Live Action responded with “Be a real man! Stand against abortion.”

Planned Parenthood did not return a request for comment on this story.