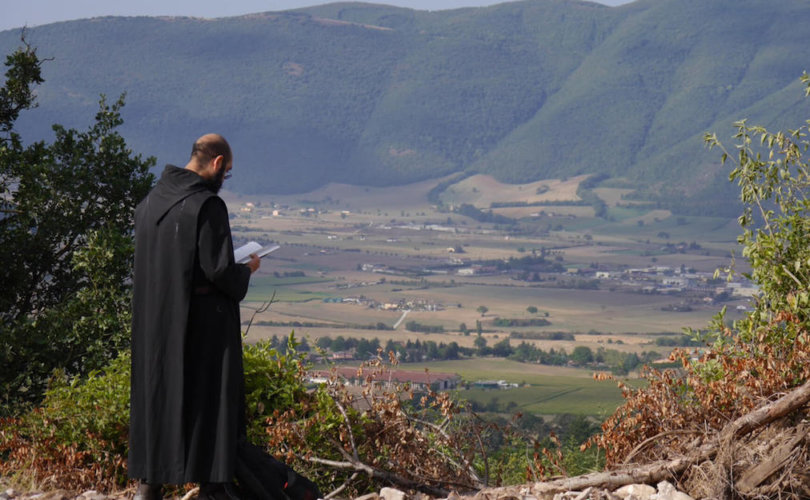 NORCIA, Italy, May 17, 2017 (LifeSiteNews) – The Benedictine Monks of Norcia hope that their life will be an even stronger example of Christian living than it was before the massive 6.6 magnitude earthquake that destroyed much of their home in October.

The Monks of Norcia are famous for their glorious liturgies in the ancient rites of the Catholic Church, their Gregorian chant, and beer brewed in the birthplace of St. Benedict. Many tradition-minded Catholics around the world were devastated at the Norcia earthquake, which killed nearly 300 people in nearby towns.

“Don’t give up hope,” Benedictine Father Martin Bernhard, the community's cellarer, urged Catholics in an exclusive interview with LifeSiteNews. “With God’s grace and our hopefully continued goodwill to cooperate with that,” the monks hope to be a beacon of hope in the modern world.

Those who advocate the “Benedict Option,” the call to create intentional Christian communities and withdrawing from much of political life, frequently point to the Monks of Norcia as an obvious modern example. Rod Dreher, in fact, profiled their monastery in his new book on the topic.

“Now, we have the chance to really be like St. Benedict and those monks at the fall of the Roman empire,” said Bernhard. “When the culture and civilization [were] falling apart…morally, economically,” St. Benedict and his followers “had an opportunity to kind of be even a brighter light, a brighter beacon.”

“We kind of find ourselves in a similar situation,” he said, because the local tourism-based economy has greatly suffered and “a lot of people are out of their homes and out of jobs…and now we have an opportunity to rebuild in that context, not only [in a] culturally, morally challenged context, but an economically challenged context.”

The tragedy of the earthquake, and Norcia's rebuilding efforts, can “show to the world that even when things go very badly or there are great difficulties around one, it doesn’t mean we have to give up hope,” said Bernhard. “The hope is that our music and our chant and our prayers and our beer and our liturgy can still be kind of given to the world and I think maybe even in a more authentic way because we will have suffered more in order to make it happen.”

Bernhard said the earthquake was the cause of “a great sense of a kind of fear and trust really in God’s providence and a great recognition of our littleness as humans.”

“When the ground shakes like it did it kind of strikes a kind of natural fear,” he explained. “You grow up your whole life thinking the ground you stand on is firm [and] it’s not going to move. But then when it starts to move, it seems like the whole world is kind of falling apart around you. And then with a lot of the tremors and everything that took place afterwards, kind of for days, you would think about, ‘if I put this here on the table, will it fall off?'”

“Even though we have reason and we’re rational, we are a very small physical creature in a big universe,” Bernhard said of man.

The Monks of Norcia are rebuilding their monastery on a property of roughly 24 acres just outside of Norcia. They previously operated out of the Basilica of St. Benedict.

“The Archdiocese of Spoleto-Norcia, which owns the buildings, has decided that the spaces will have to be used by the diocese since all the other churches in town were also destroyed,” the monks stated on their website last month.

There are fields, woods, and hills on the property. The monks currently live in trailer-like temporary residences but will rebuild the monastery on the property. They offered Mass in a tent for a little while. It now takes place in a “container”-like building.

“We have a beautiful view of Norcia,” said Bernhard. “We’re hoping to give the world a beautiful monastery and place to come to when they come to Norcia.”

Their future brewery, guest house, and gift shop will hopefully be a “place of welcome of pilgrims and people from the world” and allow them to “experience nature,” said the monk. “Now that God has kind of placed us right outside of the city, we can still see the birthplace [of St. Benedict and] are right next to it but to give to the world I think an experience of the traditional liturgy and monastic life. More remotely in the mountains is much more classically monastic.”

The Extraordinary Form liturgy that the monks use exclusively can offer the modern world a life that technology can't, Bernhard said.

“The traditional liturgy carries with it all the various ways to, I think, touch and speak to the human person,” he said. “That is, it engages all the senses: sights, sounds, smells, touch. In the traditional liturgy, you pray a lot with your body too. There are genuflections and prostrations and things even that speaks to man even in a modern time.”

“The nature of man doesn’t change even if he’s in a modern period,” he continued. “The person living in the modern times perhaps has become kind of deadened to a lot of those things because of technology…It’s kind of numbed our senses but the traditional liturgy I think can really awaken our senses and also the silence that it brings can give…an opportunity and a moment of reflection that the busyness of the world” can't.

Bernhard encouraged Christians seeking to create their own communities in the spirit of St. Benedict to pray together.

“Community life is not just a social gathering,” he said. “It’s also a moment of prayer, which has a social element because it involves more than one person.”

And read together, he recommended. “Choose good books. Choose good saints…study them together, talk about them.”