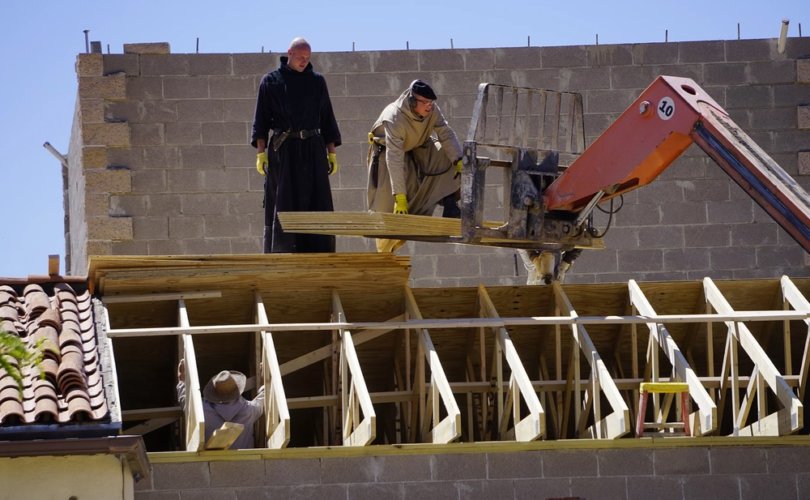 SILVER CITY, New Mexico, December 15, 2020 (LifeSiteNews) — A priory of monks who turned to coffee to support both themselves, a convent of nuns, and pro-life causes are expanding their coffee-roasting operations.

The Benedictines of Our Lady of Guadalupe Monastery near Silver City, New Mexico, broke ground on a new 9,000 square foot coffee roasting facility in July 2019. The monks hope to have the exterior finished in the first months of 2021 and the interior completed by the summer.

The new facility will house a bean storage warehouse, roasting room, grinding room, packing room, office and visitor center. It will also feature a larger capacity roaster that should increase the amount of “Abbey Roast” coffee the monks can produce “sevenfold,” or 600%. The monks decided that the new building was necessary because, after years of steadily increasing sales, demand had outstripped their ability to produce Abbey Roast coffee. They were assisted in the project by William and Jean Dunn of JE Dunn Construction and other benefactors.

The monks have been involved in the construction of the building themselves, assisted by building professionals, depending on the complexity of the task—and their cash flow.

“We do a lot of the work ourselves, and when we have the funds—when people donate—we hire regular crews,” Brother Bernard, Obl. S.B. told LifeSiteNews.

“But when they don’t [donate], we continue our own work.”

Currently the monks are trying to raise funds to finish the building and pay for the new coffee roaster. But Brother Bernard also underscored that their coffee sales, including those of the limited-edition Christmas Blend, continue to help many pro-life organizations. These include American Life League and, yes, LifeSiteNews. This holiday season, sales of the monks’ Christmas blend will exclusively benefit LifeSiteNews.

Abbey Roast is also the official coffee of the March for Life in Washington, D.C., and usually the monks have a stall in the event’s hotel. This coming January, thanks to the coronavirus restrictions, there will be a hospitality tent instead, and the monks will be there, supplying their joy-giving elixir.

Brother Bernard described the Christmas Blend as “bold, dark, and flavorful” and told LifeSiteNews what different coffees were added to the Brazilian beans before deciding he didn’t want to give all the monks’ coffee secrets away.

There are about 35 men in Our Lady of Guadalupe Monastery; four young men are new postulants and Brother Bernard estimated that there were three or four new professions in 2020. In an email to LifeSiteNews, his fellow Benedictine Brother Brendan stated that the average age of the community is “around 30 years old.”

Brother Bernard explained that the community is a priory with a prior, Father Cyprian Rodriguez, rather than an abbey with an abbot, and that their life is “completely traditional,” complete with Matins said at 3:30 AM.

“We have a farm… We have a very [stable] life, and we have a lot of the original type of things that monks did years ago. It’s a step back into the Middle Ages, except that we have internet and stuff like that to sell our coffee.”

Less stable is the composition of the community. Asked if the monastery had lost any monks this year, Brother Bernard said that monks “come and go,” which is just a part of life.

“A lot of people have what we call a ‘temporary vocation’ where God allows them to get their lives together and then they go out and get married. So that happens a lot. Generally, it’s a slow building process.”

But Brother Bernard himself was a founding member and has been with the community for 26 years. As well as being a crisis pregnancy counsellor in his earthly life, he was an architect.

“I designed things, but I never really built them by hand,” he told LifeSiteNews.

“And now I build everything. The [monastery] tower you see, I laid the blocks. We’re building a little City on the Hill, like the Lord says in the Gospels. Benedictines are known for being on the mountain tops, the Cistercians in the valleys.”

One of the monks’ dreams for the future is to help more local pro-life groups raise funds for their activities by expanding their “Cafe 4 Life” program.

“We make enough to help us continue our work, and support our sisters and ourselves […] and the pro-life groups can raise the funds on the wholesaled coffee, maybe $3 or $4 a bag, and they raise money for their local ministries.”

Brother Bernard first got the idea of the monastery coffee production when in 2010 he was sent down to Brazil by the prior, as an architect, to help brother Benedictines rebuild their church. The American monk was impressed by how good the Brazilian coffee was. Today his community imports their coffee from “everywhere,” sourcing it in Oakland, California, but their principal coffee still comes from a small family-run producer in Brazil.

“We make our own custom blends,” Brother Bernard said and estimated that the monks currently produce about 43,200 pounds of coffee a year.

Meanwhile, the COVID-19 outbreak has had little impact on monastic life. Brother Brendan told LifeSiteNews in his email that the monks still receive daily inquiries daily from visitors asking if they can come and visit, and they do allow a limited number of visitors to their chapel and monastery grounds.

“Thank God we’ve been able to continue our work, our construction, and our production,” Brother Bernard told LifeSiteNews.

“Actually, our coffee production probably went up during [COVID] because people are home, they’re drinking lots of coffee, and [coffee] makes you happy.”