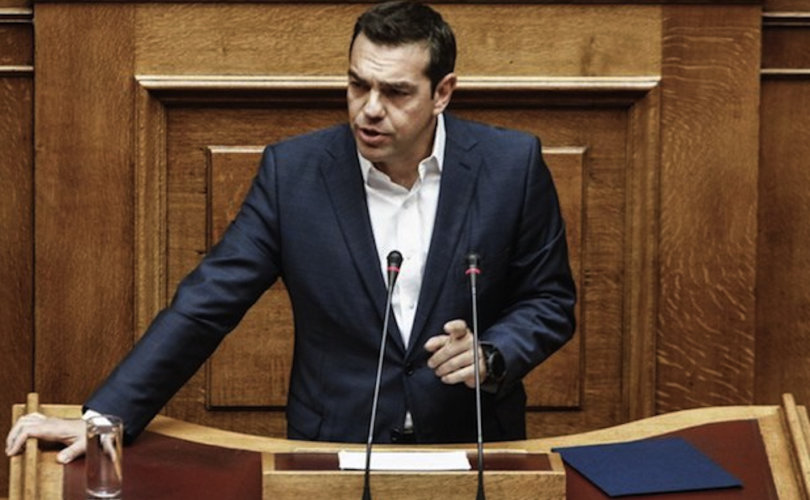 The “Change of Sex” bill passed overwhelmingly, by 171 votes, in Parliament with strong support from Prime Minister Alexis Tsipras. It grants legal recognition to sex changes without any requirement other than the desire of the applicant, allowing anyone age 15 or older to legally change gender.

Tsipras spoke against what the country’s dominant Orthodox Church calls “Holy Tradition” and the Church’s teaching on the family in heated words to Parliament.

“Absolutely no Tradition, no perception of family, calls for people to be sidelined or tossed aside into a social and institutional abyss,” the Greek Prime Minister said.

The proposal was adopted by the Greek Parliament upon its first reading and immediately drew fire from Orthodox Church leaders, who unanimously condemned the law as “immoral” and “monstrous.”

Greece was thrown into upheaval last week when the Leftist Syriza party proposed making sex change a matter of personal choice completely unrelated not only to biology but to any medical or psychological diagnosis confirming gender dysphoria. The unconditional choice law even goes so far as to make sex change legally recognized without therapy, testing, counseling, hormones, or surgery.

Greek law previously required legal gender changes to be after a diagnosis of gender identity disorder and concrete steps to change gender have taken place, such as sex “change” surgery. But homosexual groups argued that anyone at any time for any reason should be able to demand that the legal system recognize them as the opposite sex.

The new law makes legal gender identity change by simple declaration up to two times back and forth, and applies to minors as young as 15.

“I can’t wait!” 40 year-old Raffaela told Reuters before the final vote. “The moment the bill passes, I’m changing my identity!”

The Holy Synod, an official gathering of Orthodox bishops in Greece, warned that the proposed law is an “affront to society” and a threat to “the sanctity of family.”

“The proposed bill … attacks the sacred institution of the family, contradicts good morals and common sense and destroys man,” the bishops unanimously stated. “Instead of diminishing confusion and mental disorders, it will increase them and give rise to a dangerous social phenomenon.” They added that it will create “an explosive situation in schools as well.”

The bishops issued a joint document delineating the Christian view of sex. Male/female gender is “the basis of psychosomatic complementarity in the mystery of life and love,” the hierarchs explained. One’s gender “is not eligible to be changed, but is a Divine gift to man to be used in his sanctification.”

“Gender is neither freely chosen nor altered at will,” the Synod asserted, and Greek law must not be subject to “the scientifically unsubstantiated statement of the citizen, which may later be changed.”

The Orthodox leaders warned that compassion for “the afflicted and wronged fellow man” is not behind the proposal but instead the coercion of powerful lobbying groups, which result “in the dissolution of social cohesion and the spiritual death of man.”

The prelates called upon parliament to “withdraw the bill” and for the world to stop “strengthening tension, division and absurdity, to contribute to the spiritual uplifting of our citizens.”

The Synod concluded by reiterating that Christians love the sinner, and part of that love is to tell the truth about harmful behaviors like sodomy. “The Church surrounds all people with love and understanding indiscriminately, but always desiring their salvation must demonstrate the failure of critical decisions.”

Individual Orthodox leaders spoke out against the bill as well. “You are promoting a bill which denies the Triune God and Creator and casts blasphemy upon Him,” Metropolitan Kosmas of Aetolia wrote to Parliament. “This new law is unnatural, it encroaches upon the psychosomatic identity of the person, fosters depravity, and aims to thwart a person on his (spiritual) path.”

“The bones of our saints and heroes are trembling!” Kosmas said.

“We expect that you (Parliament) will raise your voice against this bill,” the Metropolitan urged before the vote. “The people are searching for role models, Greek leaders, who will save the Motherland and the people.”

“Today they tell us that God did not create man and woman, driving the idea from the minds of our children. Every man can easily become a woman, and every woman a man,” Metropolitan Nicholas of Phthiotis argued in a sermon. “Do you know why they are doing this? They want to ensure, at any cost, that homosexuals will be able to adopt children.”

“Do you see how far these Greek Orthodox deputies have sunk?” Nicholas preached.  “They have brought blasphemy upon the human body … It is madness for any reasonable person, and a satanic deed from the point of view of God’s law. But some people are trying to make our state a state of sin.”

“Gender is sacred,” Bishop Nicholas of Mesogaia said in a TV interview. “It is a precious thing for a woman to know about her feminine nature, and for a man to be aware of his male nature.”

“Independent Greeks” Deputy Kostas Katsikis took a bold step contrary to his party by opposing the sex change law. Katsikis called the law “a threat to the avaton of the Holy Mountain,” which keeps Mount Athos, a reclusive monastery-only island, exclusively male populated.

The leading monks on Mount Athos wrote to the Ministers of Justice and Education and Religious Affairs as well as Parliament, stating their concern for “the Orthodox faith of the Fatherland” in light of the sex change law. “We wonder what is left for our future,” the monks confess.