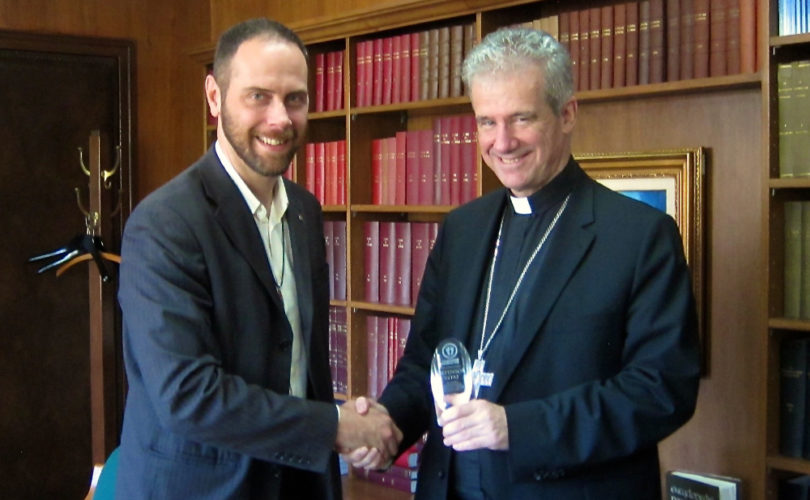 Montreal Archbishop Christian Lépine became the first recipient of an award on Tuesday created by Quebec’s leading pro-life organization Campagne Québec-Vie (Quebec Life Coalition) to honor a member of the clergy who has made an exceptional contribution to the pro-life cause.

“We at Campagne Québec-Vie (CQV) are honoured to give our first ‘Defensor Vitae’ (Defender of Life) Award to Bishop Christian Lépine, as a token of what he has done for Life and Family in the past, and as a sign of our support for all his future projects in defense of life and the family,” CQV President Georges Buscemi told LifeSiteNews.

“As a priest, then as a bishop, he has shown himself to be a real disciple of Christ and particularly of Saint John Paul II, promoting chastity through the teaching of the Theology of the Body and participating in all manner of pro-life events.”

“He is a solid pro-life bishop, and for that we are grateful,” he said.

The six-inch crystal award, shaped like a shield, has tiny footprints engraved at the top, the archbishop’s name, and a message of recognition.

Appointed by then-Pope Benedict XVI in 2012 to head the Archdiocese of Montreal, Lépine was already known as a strong advocate for life and family, a reputation he has lived up to since taking over the diocese.

Only days after his appointment, Lépine was already facing attacks from the province’s abortion movement for his pro-life and pro-family stance. Despite the biting criticism, Lépine did not shy away in one of his first press conferences from bluntly answering a question about abortion, stating “God is the author of life” and “the first right is the right to life.”

Lépine was outspoken against Quebec’s push to legalize euthanasia with Bill 52 as “medical aid in dying.” Not only did he make numerous media appearances condemning the proposal, but his diocese also ran newspaper and radio ads against it.

While the bill eventually passed in June, Lépine did not mince words about what Bill 52 would condone. “In hastening a person's death, … we are not helping them in dying, we are directly ending their life. It is to give our doctors the authority to kill patients who are vulnerable in certain circumstances,” he said in February.

LifeSiteNews contacted the archbishop’s office for comment, but was told by a secretary that interviews would not be granted during the Synod of the Family happening in Rome.

Along with the award, Buscemi also delivered an open letter in support of the archbishop signed by 1,000 members of the diocese of Montreal.

“We very much appreciate your generous presence among your flock; your numerous visits to our parishes; your evenings of catechesis at the Montreal cathedral; your concern for the family and for the Catholic education of our youth as well as your support for the various adoration chapels throughout the diocese,” the letter states.

Buscemi told LifeSiteNews in a previous interview that leaders like Archbishop Lépine who openly advocate for life often do not have it easy.

“These people are often persecuted for their pro-life stance and it’s good to have moral support from a community to hold up the person and to confirm them in their fight,” he said.

The inauguration of the award comes on the occasion of CQV’s 25th anniversary.