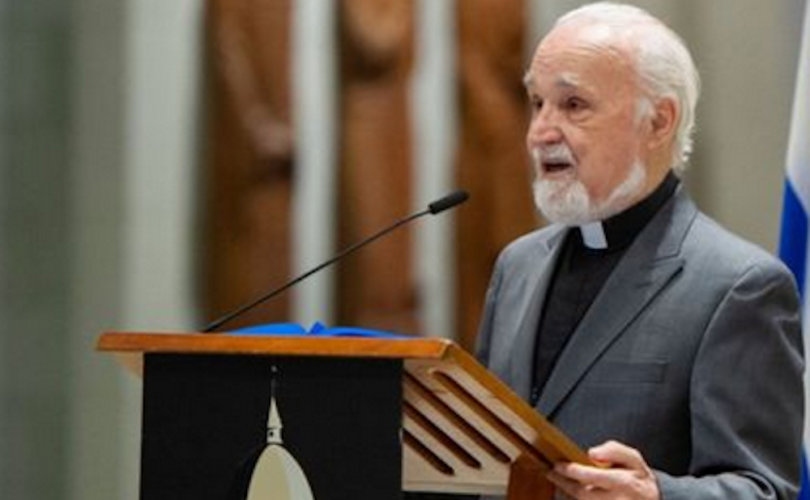 When police officers arrived at approximately 8:40 a.m., security guards on site had already apprehended the alleged perpetrator, who appeared to be a tall, bearded man reported to be 26 years old. He was taken away in cuffs by police to a waiting patrol car on the scene.

Reporter Dan Spector tweeted, “St. Joseph's Oratory still swarming with police after a priest was stabbed in the middle of Mass this morning.” He cited worshipper Adele Plamondon, who said “Hate is all over the place right now.” The motives and religious affiliation of the alleged attacker have not yet been reported. Police stated that the attacker is known to them.

Closed-circuit video recorded the scene as the assailant, holding a large knife, approached the altar at the large church and stabbed Fr. Claude Grou, the Oratory's rector who tried to escape and crumbled to the floor of the sanctuary as a banner fell on top of him. Fr. Grou, 77, sustained what police said were minor injuries. He was sitting up while being taken by ambulance to a local hospital for treatment.

The video showed that the assailant did not appear to struggle when he was tackled and detained by worshippers. Witnesses said he did not shout or speak during the attack. There were approximately 60 worshippers in the church, which is one of Canada’s largest. The oratory is dedicated in honor of St. Joseph, the foster father of Jesus and patron of Canada. It remains open to pilgrims despite a heightened police presence.

Philip Barrett, who was sitting near the front of the church, said the congregation immediately started praying for the priest, according to The National Post.

In a statement, Archbishop Christian Lapine deplored the attack. According to the archdiocesan website, Fr. Grou “by the grace of God” survived his wounds and is not in danger.

”We are all shocked by this act of violence that has taken place in our city,” the archbishop said, “in a space dedicated to peace.”

Recognizing that “places of worship of many religions are targets of acts of violence,” he called on Montreal citizens to “follow the path of peace and love, believing that good will overcome evil through prayer and good works.”

Encouraging people to pray and remain calm, Archbishop Lapine added, “Let us pray to St. Joseph and believe in peace.”

The attack at St. Joseph’s Oratory came during the same week that city officials announced that a crucifix that had been in place at Montreal’s City Hall since 1937 will be permanently removed. According to CTV News, city councilor Laurence Lavigne-Lalonde announced at an executive council meeting, “The crucifix was installed during an era that was completely different than the one we live in today.” Lavigne-Lalonde added, “We now live in a society that has evolved and is represented by democratic institutions that must be secular, neutral and open to all citizens.”