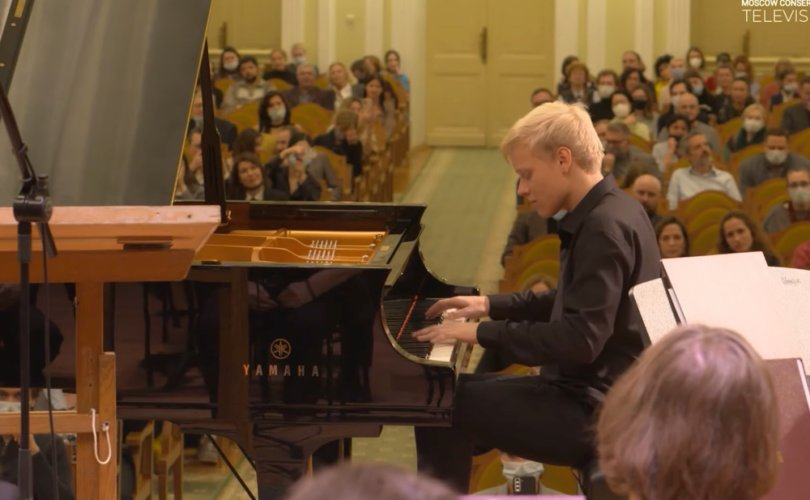 MONTREAL, Quebec (LifeSiteNews) – The Montreal Symphony Orchestra (OSM) has cancelled the contracts of young Russian piano prodigy Alexander Malofeev as a result of the Russian/Ukraine conflict and public pressure that ensued.

According to the OSM in a statement sent out Tuesday to media which LifeSiteNews viewed, the decision to sack Malofeev was done “considering the serious impact on the civilian population of Ukraine caused by the Russian invasion.”

As a result, the OSM said they have announced “the withdrawal of pianist Alexander Malofeev from performances of the concert, ‘Michael Tilson Thomas: Monumental.’”

“The OSM feels that it would be inappropriate to receive Mr. Malofeev this week,” said the OSM.

The OSM said in its statement that it will “continue, however, to believe in the importance of maintaining relationships with artists of all nationalities who embrace messages of peace and hope. We look forward to welcoming this exceptional artist when the context allows it.”

Malofeev has called for peace and said “every Russian will feel guilty [about what is going on] for decades.”

Regarding the cancellation of his OSM performances, Malofeev wrote in a Facebook post yesterday that “unfortunately, it is impossible to hold them due to political reasons.”

“I sincerely apologize to the audience,” he added.

Malofeev was to play in a concert with guest conductor Michael Tilson Thomas on March 9, 10, and 13.

Thomas said in a statement that he was “pleased” to be “working in Montreal for the first time with the extraordinary young pianist Alexander Malofeev.”

Thomas added, however, that it is “regrettable that political situations have made it impossible” to work with Malofeev, noting that the OSM still has an “excellent collaboration” with him, but that he hopes to collaborate with him in the “near future.”

According to a CTV News report, some Ukrainians in Montreal had sent an email to the OSM to demand that Malofeev’s performances be cancelled because having him perform could be seen as promoting a Russian “cultural” product.

Twenty-year-old Malofeev began playing the piano at age five and shot to fame at 13. His Montreal performance would have been his first in Canada. The OSM still lists Malofeev on its website.

In a Facebook post last week, Malofeev gave insight into his take on the war, writing, “The truth is that every Russian will feel guilty for decades because of the terrible and bloody decision that none of us could influence and predict.”

On Monday Malofeev wrote on Facebook that it was “very painful for me to see everything that is happening,” regarding the war, and that he has “never seen so much hatred going in all directions, in Russia and around the world.”

“Most of the people with whom I have personally communicated these days are guided by only one feeling – fear,” said Malofeev, adding he was “uncomfortable” to speak with journalists as it could affect his family back home.

“I still believe Russian culture and music specifically should not be tarnished by the ongoing tragedy, though it is impossible to stay aside now. Honestly, the only thing I can do now is to pray and cry.”

Malofeev wrote that people should not “be judged by their nationality. But why, in a few days, has the whole world rolled back into a state where every person has a choice between fear and hatred?”

“I do understand that my problems are very insignificant compared to those of people in Ukraine, including my relatives who live there. The most important thing now is to stop the blood. All I know is that the spread of hatred will not help in any way, but only cause more suffering.”

Anti-Russian sentiment is on the rise in Canada, and indeed worldwide as a result of the Russia/Ukraine conflict, which has been going on for almost two weeks.