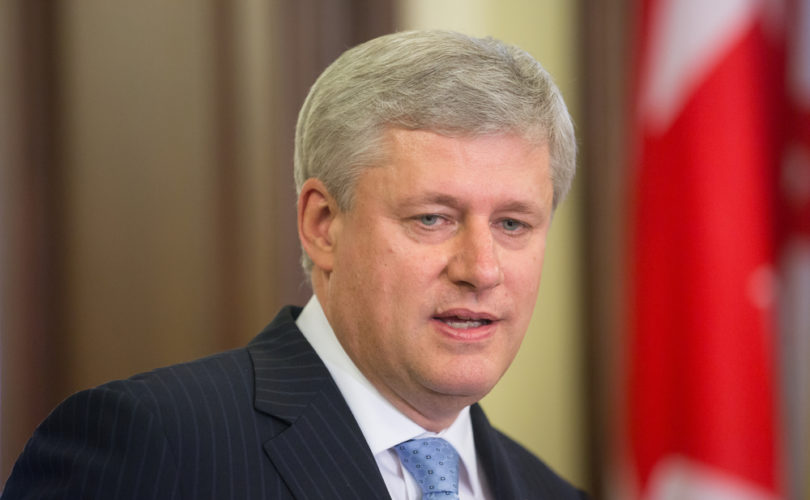 TORONTO, August 10, 2015 (LifeSiteNews) – No clear victor emerged from the sound and fury generated by an unruly, combative two-hour televised debate among Canada’s four national party leaders, so a close race between the pro-abortion New Democrats and the governing Conservatives remains just as close.

Tory Prime Minister Stephen Harper, the NDP’s Thomas Mulcair, Liberal Leader Justin Trudeau and the Green Party’s Elizabeth May stuck to the topics selected by moderator Paul Wells of Maclean’s magazine, the debate’s co-host with CPAC. These were: the economy, governance, the environment, and national security.

Abortion was never discussed, although Mulcair made an “opaque reference” to it, says Paul Tuns, editor of the pro-life and pro-family newspaper The Interim, when he noted Trudeau’s 2012 declaration he would support separation for Quebec “if I ever believed Canada was really the Canada of Stephen Harper and we were going against abortion and going against gay marriage.”

At this early stage in the debate, said Tuns, who is author of the newly-published book, “The Dauphin: the Truth about Justin Trudeau”, the leaders were clearly intent on just “holding on to their base votes. And they did. They all held their ground.”

While all three opposition leaders concentrated on Harper, they also attacked each other. With justifiable hopes of becoming prime minister, Mulcair presented himself as a centrist providing “balance” between May, who, he claimed, opposes all military intervention and all pipelines, and Harper, who he said would support any military intervention and any pipeline proposed.

Harper denied these characterizations, depicting himself, like Mulcair, as a thoughtful leader who decides major issues case-by-case. The prime minister was at his unflashy best defending Canada’s military intervention in the Middle East against “violent Jihadists” who are “slaughtering” the innocent. He defended Israel’s right to exist. Mulcair the moderate asserted that both Israel and Palestine had a right to exist (ignoring the fact that the Palestinian leadership is pledged to Israel’s destruction).

Harper also carefully explained why he has not appointed any senators for several years, leaving 22 seats vacant in Parliament’s upper house. He hopes the manoeuvre (now the subject of a court challenge) would force provincial governments to hold elections to name senators democratically, or come up with their own proposal. (Harper began politics with the Reform Party, whose bedrock policy was the Triple E Senate, for effective, elected, and equal).

But moderator Paul Wells caused Harper an awkward moment when he asked if he should apologize for having selected Senator Mike Duffy and Pamela Wallin, both under investigation for fiddling their expenses. Harper somewhat lamely responded that he was responsible for his own actions but not those of others.

Mulcair rebutted Harper’s efforts to portray himself as a good fiscal manager who is bringing down a balanced budget this year, by often repeating that Harper was responsible for “eight deficits” before this year, which had added “$150 billion” to the government debt.

Trudeau effectively dispelled the notion fostered by Tory “attack ads” that he is a lightweight who is “not ready” for leadership by demonstrating a solid grasp of the four issues, but his aggressive interruption of the other leaders was less impressive. Elizabeth May also demonstrated a good knowledge of public issues outside her Green Party’s environmental raison d’etre, but also frequently interrupted her rivals to a degree that many might find irritating.

Tuns said that CLC also opposes the proportional approach because “it gives too much power to the parties,” which under that system get to choose Members of Parliament without their being elected. The current system, on the other hand, encourages a strong connection between constituents and MPs, Tuns said, and is more likely to see pro-lifers sent to the House of Commons.

With the October election to be decided by the first-past-the-post method, pro-lifers should get heavily involved in supporting pro-life candidates, Tuns told LifeSiteNews. The latest opinion surveys, according to the poll aggregator threehundredeight.com, put the NDP a little ahead of the Conservatives in popular support, and tied with it in seat projections at 127, or 43 short of a majority.

But Tuns doubts those findings because, in his analysis, they over-represent young people, who prefer the NDP and Liberals but tend not to vote as much as do seniors, who prefer the Conservatives.

Also under-represented are recent immigrants, which could prove a telling omission in the Greater Toronto Area, where the Ontario government’s pansexual sex education curriculum could alienate socially conservative ethnic voters from the Liberals. “My analysis is that the Tories with come out ahead with 140 to 160 seats,” said Tuns.

“There are going to be a lot of close races. Pro-lifers should get out and support good candidates in their own or neighbouring ridings and ensure the pro-life contingent in Ottawa is strong.” Tuns noted that at least 25 pro-life MPs are retiring this year.

Missing from the debate were any of the life or sexual issues that concern social conservatives, feminists and sexual minorities—but clearly hold no appeal for Maclean’s journalists. These issues also offer clear distinctions between the government and opposition.

Campaign Life Coalition puts the Conservatives ahead of its rivals not only on abortion but on two other life issues—euthanasia and assisted suicide. The Harper government has opposed legalization of both, while the other parties have supported it. On abortion, while Harper has taken pains to shut down efforts to protect the unborn, both the Liberals and the NDP forbid candidates who will not support full abortion-on-demand.

CLC also lumps the opposition together for their support of “radical anti-family legislation” as represented by Bill 279, to so-called “Bathroom Bill” that advanced the LGBT’s efforts to break down gender distinctions while normalizing all minority sexual preferences. This bill was passed by the House of Commons with a minority of the Tories voting for it along with the opposition.

The federal Liberals are also being associated with the Ontario Liberal government’s controversial sex-ed agenda, which has made itself very unpopular with new immigrant communities in the Greater Toronto Area.