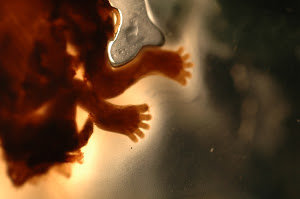 Klopfer died on September 3 at age 75. For decades he was an abortionist at The Women’s Pavilion in South Bend, Indiana until his medical license was suspended in 2016 for a history of violations including failure to report the rape of a 13-year-old girl.

The Sheriff’s Office of Will County, Illinois (where Klopfer had a home) announced last month that a Klopfer family attorney had notified the county coroner’s office “that while going through the doctor’s personal property they discovered what appeared to be fetal remains and requested that the Will County Coroner’s Office provide proper removal.” Authorities subsequently found and removed “2,246 medically preserved fetal remains.”

On Wednesday, the Will County Sheriff's Office announced the discovery of even more fetal remains in the trunk of a car owned by Klopfer, the Kane County Chronicle reports. The remains were found when family members met with police to examine several vehicles Klopfer had in storage.

Deputy Chief Dan Jungles estimated that the remains represented 50 aborted babies, but cautioned that an exact number was “hard to determine” thanks to the remains “disintegrating” in the cardboard boxes in which they were stored.

Illinois and Indiana officials are working together to investigate this latest discovery. “Our objective, ultimately, is to resolve this with respect and dignity for the remains and it would anticipate that we would add any additional new remains to the mix,” Indiana Attorney General Curtis Hill said, WSBT reports.

“We don't want to see fetal remains discarded like so much trash by the side of the road,” he added. “Imagine, if you will, if we discovered 2,246 remains of adults who were deceased in some type of preservation fluid. Everyone would be freaking out.”

Pro-lifers have observed that the story underscores the violence of abortion and the relative lack of scrutiny the abortion industry enjoys in many states. In particular, it has potential ramifications for pro-abortion Democrat presidential candidate Pete Buttigieg, who as mayor of South Bend, Indiana defended other scandal-plagued abortion centers in the area. After several days of silence, Buttigieg said the discovery of the first group of bodies was “disturbing” but shouldn’t “get caught up in politics at a time when women need access to healthcare.”

Following the discovery of the additional aborted babies, Dr. Monica Migliorino Miller, author of Abandoned: The Untold Story of the Abortion Wars and director of Citizens for a Pro-Life Society, released the following statement:

Every day in America approximately 3,000 unborn children are killed in abortion facilities across the land. Unwanted in life, they are treated as so much rubbish in death, their bodies the refuse of choice to be disposed. How ironic though, that it is not the killing of the unborn we find shocking, but rather the fact that the abortionist who put them to death kept the bodies in his house. This is what the public finds gruesome and abhorrent – rather than the actual killing of the babies themselves. But perhaps because Ulrich Klopfer lived with the dead unborn, and the shocking volume of those killed by abortion all found in a place one calls “home” is what it takes to uncover the sordid quality and unjust action that is legalized abortion. Somehow now abortion just doesn’t seem so right, so moral, so justified, simply a constitutional right to be protected. And now, Oct. 7, 2019 more aborted babies have been discovered in the gated lot of a business in Dolton, Ill. where Ulrich stored his expensive cars. The babies were found in the trunk of one of his Mercedes-Benz[es]. The death count just seems to grow – and with these grizzly Klopfer-discoveries no one can deny that abortion kills actual human beings – their bodies hidden away and now disturbingly brought to light.

It seems apparent that abortionist Klopfer was stockpiling these aborted children, for reasons we yet do not know, though one can speculate. How odd, too, that it took Klopfer’s own death to reveal the secret deaths of these unborn children, whose existence until now remained a dark secret within his own home. And now that their hidden bodies have come to light we have a chance to at least give them the respect owed to them as fellow members of the human family – a honorable, dignified, and ceremonious burial. Their remains must not be simply dumped; their bodies cremated in some act of practical disposition and buried in an unmarked grave or worse incinerated as mere medical waste. Pro-life groups stand ready to bury them. The last work of mercy, to bury the dead, will thus become the first work of mercy these unwanted children will ever know.