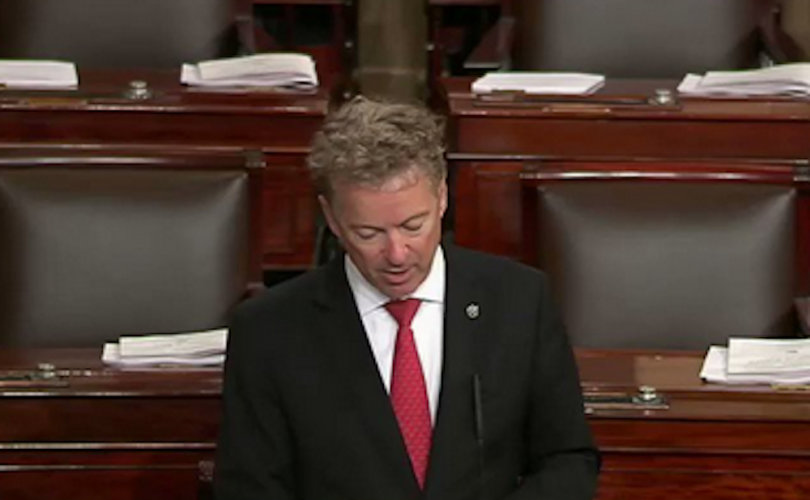 WASHINGTON, D.C., August 23, 2018 (LifeSiteNews) – Sen. Rand Paul of Kentucky denounced Republican leaders Thursday for attempting to block his latest amendment to block Planned Parenthood, questioning both their commitment to the preborn and the credibility of their campaign promises.

The opthamologist and libertarian Republican introduced an amendment last week to the Senate appropriations package funding the Departments of Defense, Labor, Health and Human Services, and Education that would forbid money appropriated for those departments from directly or indirectly going to any entity that performs or finances most abortions.

But Senate GOP leadership quickly moved to fill the last open slot in the amendment tree with a placeholder to block Paul’s addition, out of fear it would jeopardize pro-abortion senators’ support for passing the overall bill.

On Thursday, Paul took to the Senate floor to forcefully challenge his colleagues and leaders over the move.

My amendment would end funding to Planned Parenthood, but it is being blocked by… Republicans. pic.twitter.com/7pSE5OgOlV

Big-spending Republicans fear that blocking funding for Planned Parenthood would derail their plans to greatly expand the welfare-warfare state. pic.twitter.com/ddKN6RjjgX

The “dirty little secret,” the Kentucky Republican alleged, was that the leadership of his own party “favors bloated government spending more than they care about Planned Parenthood,” and fears that attaching defunding to the bill “would derail their plans to greatly expand the welfare state.

“So be it,” he said. “Now the public will know that many Republicans just give lip service to pro-life issues” and are “more concerned” with “bloated government spending than saving lives.”

Projecting that thousands of the 320,000 babies Planned Parenthood aborts in a year would have grown up to become doctors, researchers, engineers, lawyers, teachers, and pastors, Paul lamented that “all of that potential is lost each year as a consequence of Planned Parenthood.

“Please explain to voters at home why you (…) purposely filled the amendment tree to block an amendment to defund Planned Parenthood,” Paul challenged his fellow Republicans. “Why passing huge deficit spending bills is more important than trying to save lives, and please explain to America why anyone would trust politicians who continue to break their promises.”

Paul demanded unanimous consent to hold a vote on his amendment, to which leadership relented. The final vote was 45-48, coming up short of the 60 needed to pass most legislation under the Senate's current filibuster rules.

Trump has said electing more Republican senators this November is the key to passing pro-life legislation. It remains to be seen how Republican leaders’ latest move will impact pro-life voter enthusiasm in the midterm elections.