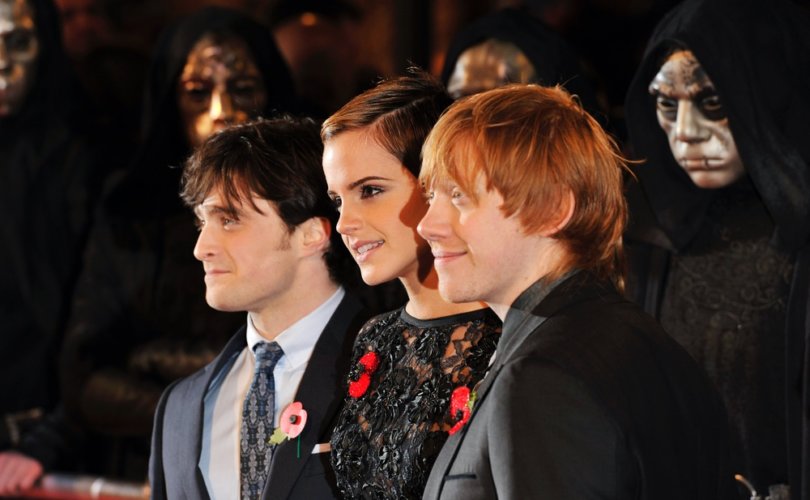 LONDON, England, June 16, 2020 (LifeSiteNews) ― Two more former Harry Potter stars whose careers were built on the works of J.K. Rowling have affirmed their support for transgenderism after the author defended the concept of womanhood.

Actor Rupert Grint, 31, best known for his portrayal of Harry Potter’s friend Ron Weasley in the Harry Potter movies, made a statement to Britain’s establishment newspaper last week supporting the idea that men can be women, and vice versa.

“I firmly stand with the trans community and echo the sentiments expressed by many of my peers,” Grint told The Times of London.

“Trans women are women. Trans men are men. We should all be entitled to live with love and without judgment.”

Grint’s remarks have been described as another shot in a “war” between the young actors who starred in the film versions of J.K. Rowling’s unprecedentedly popular children’s novels and the bestselling author herself.

Earlier this month, Rowling, 54, re-entered the struggle for the science-based definition of womanhood by criticizing the headline of an article describing “people who menstruate.” In the ensuing controversy, Rowling’s assertions about the biological basis of sex were denounced on June 8 by former child star Daniel Radliffe, 30, who played the lead role in the Harry Potter films.

Actress Emma Watson, 30, who played Harry’s and Ron’s friend Hermione in the series, also signalled her support for the “trans community” with a series of tweets she posted on June 10.

“I want my trans followers to know that I and so many other people around the world see you, respect you and love you for who you are,” she continued and signaled that she gives to transgender charities.

“I donate to @Mermaids_Gender and @mamacash. If you can, perhaps you’ll feel inclined to do the same,” she wrote. “Happy Pride 2020!”

Mama Cash is a Amsterdam-based feminist charity that funds projects in Eastern Europe and the developing world. Its mission statement says the organization helps “to build the partnerships and networks needed to successfully defend and advance women’s, girls’, trans and intersex people’s human rights globally.”

Mermaids is a British charity that fights to lower the age at which children can access so-called “sex-change” hormones and surgery. Last year five former employees of London’s Tavistock Centre for children distressed by their biological sex warned that charities like Mermaids do damage by “allegedly promoting transition as a cure-all solution for confused adolescents.”

Also on June 10, in response to the growing clamor over her support for the biological definition of womanhood, J.K. Rowling, who is pro-abortion and supportive of the homosexual cause, published a heartfelt essay about her study of the issues around sex and her experiences as a woman.

“On one level, my interest in this issue has been professional, because I’m writing a crime series, set in the present day, and my fictional female detective is of an age to be interested in, and affected by, these issues herself, but on another, it’s intensely personal, as I’m about to explain.”

Rowling revealed that she has been regularly insulted and threatened by trans activists for unwittingly signalling “wrongthink” in her social media research, and told that she was “literally killing trans people with [her] hate.” She noted the misogyny of their slurs, particularly “TERF.”

“If you didn’t already know – and why should you? – ‘TERF’ is an acronym coined by trans activists, which stands for Trans-Exclusionary Radical Feminist,” Rowling explained.

She observed that “a huge and diverse cross-section of women” are called TERFS, ranging from a mother frightened that her child wanted to “transition” to escape “homophobic bullying” to an elderly lady who stated she would never visit a particular department store again because its management is allowing any man who says he’s a woman into the ladies’ changing rooms.

“Ironically, radical feminists aren’t even trans-exclusionary – they include trans men in their feminism, because they were born women,” Rowling said.

‘We’re living through the most misogynistic period I’ve experienced’

The liberal author, who has written over 30 books, supports over a dozen charities, and has been inducted into the Queen’s Order of the Companions of Honour, offered five reasons why she is worried about “the new trans activism.”

First, Rowling believes it will hurt the underprivileged women and children her charities support in Scotland, as well as muddy medical research. Second, as a former teacher and the founder of a children’s charity, she believes trans activism could have a baneful influence on both education and safeguarding. Third, “as a much-banned author” she is interested in freedom of speech. (Her books have been removed from the libraries of some parochial schools and were strongly criticized by late Vatican exorcist Father Gabriele Amorth; Catholic exorcists have expressed concerns about her books negatively predisposing children to the occult.)

“Most people probably aren’t aware – I certainly wasn’t, until I started researching this issue properly – that ten years ago, the majority of people wanting to transition to the opposite sex were male,” she wrote.

“That ratio has now reversed. The UK has experienced a 4400% increase in girls being referred for transitioning treatment. Autistic girls are hugely overrepresented in their numbers.”

The same goes for the U.S., she noted, and revealed that she might have been tempted herself to “transition” had she been born 30 years later, thanks to the huge “allure of escaping womanhood.” Her father had said openly that he would have preferred for her to have been a son. But as difficult as things were for her as a girl who didn’t identify with pink and frilly things, she says the climate is even worse for girls today.

“We’re living through the most misogynistic period I’ve experienced,” she wrote and said that arguments about “femaleness not residing in the sexed body” and “assertions that biological women don’t have common experiences” are “deeply misogynistic and regressive.”

Rowling’s fifth reason for being worried about misogynist trans activism proved to be the stuff of tabloid headlines: her experience as a survivor of a violent and abusive marriage and of sexual assault. The famous author was known to have struggled in relative poverty as a single mother before the success of her first Harry Potter book, but she had hitherto been reticent about her first marriage. Her sufferings had made her aware of women’s vulnerability and need for safety.

“When you throw open the doors of bathrooms and changing rooms to any man who believes or feels he’s a woman … then you open the door to any and all men who wish to come inside,” she said.

“That is the simple truth.”

Subsequently Rowling’s ex-husband underscored her point about women’s vulnerability to male violence when he told the mainstream media that he had slapped the author and wasn’t sorry.

Since the grand finale of the Harry Potter film series in 2011, the former child stars, now all multi-millionaires, have continued to find work in cinema and television. Emma Watson has also been in demand as a model.

When criticized for posing for a photo that exposed most of her breasts to readers of Vanity Fair, Watson responded, “Feminism is about giving women choice; feminism is not a stick with which to beat other women with. It's about freedom, it's about liberation, it's about equality. I really don't know what my [breasts] have to do with it. It's very confusing.”