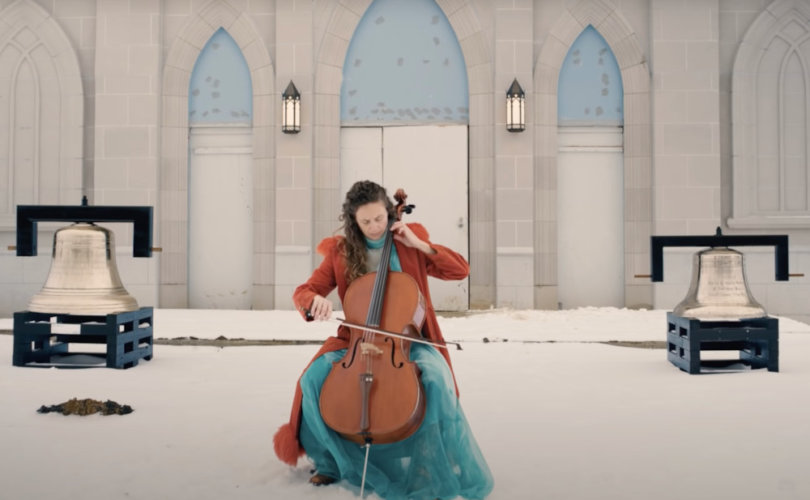 FRONT ROYAL, Virginia, March 23, 2021 (LifeSiteNews) — The haunting theme music of The Mission, played on a cello, soars into the heavens as Christendom College’s snow-dusted new Christ the King Chapel fills the screen.

At times viewers of LifeSiteNews’ video essay about the construction of the chapel might feel like they are themselves soaring when they look down from dizzying heights upon the classic Gothic design of the church, both from inside and outside, and the surrounding Virginian countryside.

The music, played by Dr. Larissa Fedoryka on the cello, includes “Gabriel’s Oboe” by Ennio Morricone and Schubert’s “Ave Maria”. It provides a gorgeous soundtrack to the video. In the interview, Fedoryka, who was once a student, and is now a teacher, at Christendom College, remarked that when you walk into a beautiful place, you need beautiful music, and in a beautiful church, you need sacred music.

“I think everything about God is symmetrical and it’s balanced,” she said.

Fedoryka, dressed in an orange-red coat and a turquoise gown, can be seen playing her cello both inside the empty church and against the pristine backdrop of the snow.

Despite the weather, President O’Donnell did make it to the site, arriving just as the cellist finished her performance outdoors. He told LifeSite’s producer Jim Hale that although Christendom is a liberal arts school, the fine arts are also very important there.

Christendom is a private Catholic school, one that was founded in the 1970s when other, older Catholic schools were beginning to lose their authentically Catholic character. The school takes no federal funds or loans, which means that the government does not call the tune. And the school also nurtures vocations: Nearly 500 married couples met at Christendom, and 94 priests, 55 sisters, 7 brothers and 1 permanent deacon call Christendom their alma mater.

O’Donnell is delighted that so many alumni, including painter Mandy Hain, have become involved in the creation of the college’s new chapel.

“We need chapels, we need churches, because in many ways the whole world is living as if God did not exist,” O’Donnell said. “[T]he dominant culture now has become a hostile secularism that is trying to remove faith and people of faith from public discourse.”

“To have beautiful works of art, Catholic chapels, buildings, that lift people up, and inspire them, and remind them of … the reality of God and also the veracity of the Catholic faith is more important now than probably ever in history,” he added.

The scholar also revealed that the construction of the chapel had never halted, despite the coronavirus pandemic and the lockdowns.

Mandy Hain is painting the ceiling of the Gothic Revival church. She explained how she was using black in one scene to represent the eclipse that took place during Christ’s crucifixion. She also distinguished between ordinary art, in which viewers meditate on the artwork itself, and sacred art, which is their portal to the divine.

“The point of sacred art is to really draw you into the supernatural,” Hain said. “Sacred art … draws you beyond to the Source of beauty.”

LifeSite’s Jim Hale said that seeing such a beautiful church rising up in the rural landscape made him full of hope. “The chapel is awe-inspiring as you approach on the rural Virginia road leading into the campus,” he said.

“It immediately made me think of the great churches in Europe, and indeed this is a beautiful link to our European heritage,” he added. “My heart was overjoyed with seeing such a glorious church reflecting the beauty and truth of the Catholic faith. When you see this chapel, it’s impossible to not feel confident that the Church will endure all the trials we are struggling with today.”

Michael Hogan, LifeSite’s videographer, said that filming at Christ the King Chapel was “an amazing experience.”

“Being in the Chapel and seeing behind the scenes was so inspiring,” he said. “I am actually in the process myself of moving to Front Royal, so my entire family was with me on this trip as well. My wife and two kids — one is four, and the other is one-and-a-half,” he continued. “So it was a juggling act to be sure, but it came out wonderful.”