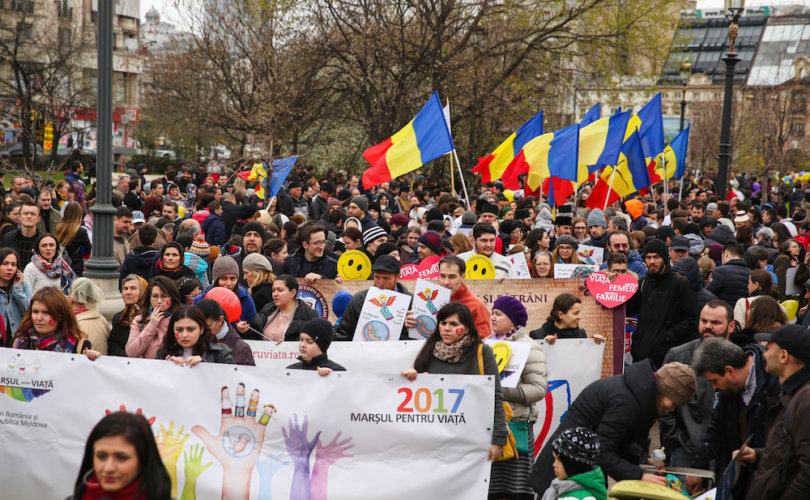 March for Life 2017 in Romania Photo by Dinu Savopol

BUCHAREST, Romania, March 29, 2017 (LifeSiteNews) — More than 8,000 pro-lifers marched for the sanctity of life in the nation's capital and hundreds of thousands more marched in cities across Romania and Moldova on Saturday.

The marches, organized locally, coincided with the Feast of the Annunciation on March 25. Bucharest participants held signs saying, “Every child is an angel coming into the world,” and “Women deserve more than abortion.”

The focus was to bring attention to helping support women in crisis pregnancies. This year's theme was “Help the Mother and the Child! They Depend on You.”

“Our message (is) focused on the need to support women … who want to give birth but they are in difficult situations,” Alexandra Nadane of Students for Life (Association Studenti Pentru Viata) explained. “There are a lot of women who are in tensed situations when they find out that they are pregnant, and instead of having an increasing joy for having a baby, their partners or families say, 'We force you to have an abortion,' and this is not fair.”

“We also have concrete measures that we propose, namely that non-governmental organizations establish counseling and support centers which help women throughout pregnancy,” Nadane said.

As the Archangel Gabriel announced the coming of the Savior with the greeting, “Rejoice!” Christians point to the Feast of the Annunciation as an affirmation of the joy of new life in the womb. The feast of the Annunciation is celebrated nine months before Christ's birth on March 25. Pro-life Christians around the world have often used the day to stand joyfully for the sanctity of all human life conceived.

In Arad, 1,000 men, women, and children marched for life, stopped at a hospital to pray, and then went to the Orthodox Cathedral at Podgoria, where they continued a vigil. They held signs reading, “Life is the first and the most important human right,” “Thank you, mother,” “I’m sorry for having an abortion,” “Abortion kills,” and, “Help the mother and the child.”

Pastors who spoke brought up the issue of marriage, calling on President Klaus Iohannis and Prime Minister Sorin Grindeanu to clearly define marriage in the Romanian constitution as between one man and one woman.

Marchers prayed the Lord's Prayer together in Carmen Sylva Park and then marched to the city's Metropolitan Cathedral, where the Metropolitan Selejan of Banat spoke of Romania's “Third World War.”

A “Third World War has passed over Romania. Statistics show that one million abortions were made in Romania in 1990. That’s why I’m saying that Romania has passed through the Third World War,” the Metropolitan said. “We must put our sword into the sheath, and not to pull it out and fight against the most helpless human beings, the baby in her mother’s womb.”

In Alba Iulia, 1,000 people — many teens wearing t-shirts reading “I’m glad I am living”— marched along the busiest streets of the city. They carried signs reading, “Life has priority,” “We support life,” “We are a voice for the unborn,” “The child, a gift from God,” and, “For life, for woman, for family.”

Twenty priests were among the Alba Iulia crowd, along with many young people, and parents with their babies. Fr. Oliviu Botoi, adviser to Archbishop Irineu, said the march was positive.

“This is not a message against the person, but a message by which we especially encourage the Christian family to enter into normality,” Fr. Botoi affirmed. “Within the Alba Iulia Archiepiscopate, with the blessing of the His Holiness Archbishop Irineu, the march for life is organized in eight cities.”

In Cluj-Napoca, 2,000 participants marched for life and family. Comments from marchers included, “I came to protect family, and life,” and, “We came to confess the true faith, and we support all those who support normality,” and “Each child should have a family formed by a mother and a father.”

Metropolitan Andrei of Cluj expressed hope that “all the young families would have at least three children, one for the father, one for the mother, and one for the country and the church.”

“Abortion is an outrageous sin,” His Holiness Andrei added.

In Iasi, 2,000 came out, many with their children, to stand for life. A student marcher named Andrei said he was at the event to support women.

“I came to this march to support family, life, values that church also supports,” Andrei said. “I don’t blame women who have abortions, but … I want to send a supportive message for women to give birth to children.”

One woman who converted to the pro-life cause said she marched to encourage women not to follow her example. “I am participating to this march today to tell the young people and to all those raising families not to do what I’ve done,” Georgeta Barascu told Mediafax. “Abortion means to kill your own child, blood of your blood, and you’ll have to bear this burden for your entire life.”

Although she had an abortion as a young woman, Barascu later made the choice for life. “I became pregnant when I was 40, all of my friends and the doctors said it’s risky both for me and for the child, recommending me to have an abortion,” she shared. “But I resisted, and my boy is 9 years old today, he is handsome and healthy. Things become right by themselves … because each child is a blessing.”

The city of Pitesi saw 3,000 pro-lifers, including priests, teachers, students, grandparents with grandchildren, and parents with their kids. Marchers stopped for a prayer service led by the Archbishop Calinic of Arges and Muscel, who also spoke on protecting traditional families.

Men held signs reading, “80 percent of the abortions are made because of the father’s pressure,” “Real men don’t force women to have abortion,” and “Real men choose life.”

It was the seventh annual Annunciation March for Life in Romania and the third annual in the Republic of Moldova. The Students for Life (Association Studenti Pentru Viata) printed the materials for the march and the Romanian Orthodox Church publicized it along with many events in the “pro-life month” online and on television. The entire Holy Synod of Romanian Orthodox bishops actively encouraged participation and blessed the march.

Leaders say the Romanian citizens, and not just the government, are called to act. “We cannot expect the state to do what we do not do individually and through the associations existing today!” Nadane said. “This means real solidarity, love and civilization.”

During decades of atheistic communism, abortion became the commonplace method of birth control in countries under the Soviet Union. The USSR was the first nation in the world to legalize abortion in 1920. But by the mid-1930s, populations had so dwindled that authorities began restricting abortion. In 1955, they lifted all restrictions, and then when the population again fell to dangerous levels, they made abortion illegal again.

In Romania, dictator Nicolae Ceausescu criminalized abortion and birth control in 1968 in order to stabilize the nation's dying population. Upon Ceausescu's overthrow and execution, abortion was again made legal in 1990.

By the end of the 1990s, Romania led Europe in the number of abortions per capita: nearly one million annual abortions in a country of 23 million people. Romania’s population fell from 23 million in 1990 to 19 million in 2014. The ratio of children born by fertile women is still well below the replacement level at 1.4.

Iasi march organizer David Ilie commented, “The Romanian people have understood that they have the freedom to kill their unborn babies, but what they do not understand is that this will ruin their future, too.”

Reported stats, however, are estimated to be only half of the actual number of abortions. There are also unaccounted for surgical abortions in private clinics, chemical abortions prescribed but undocumented, and abortions abroad by Romanian women.